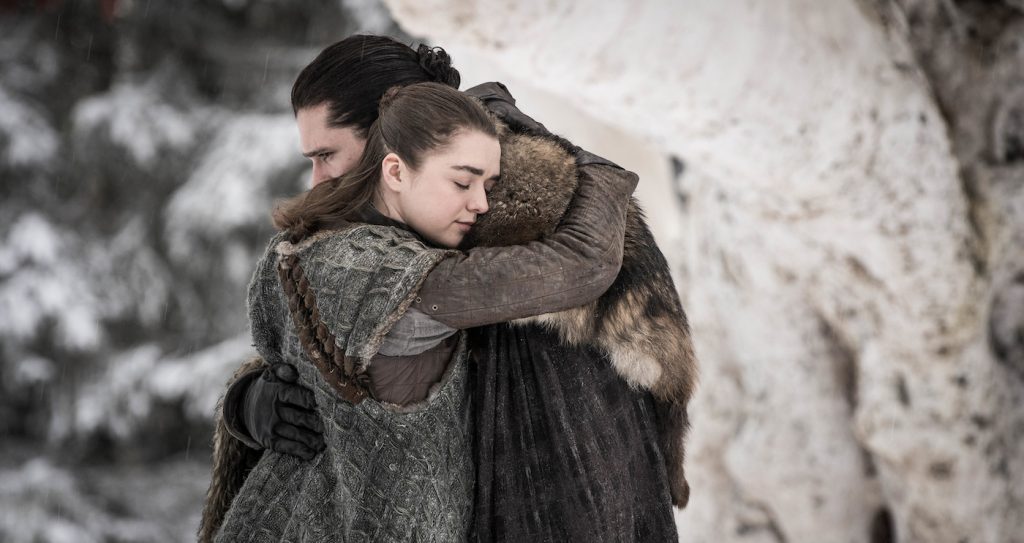 So you watched the premiere, “Winterfell,” and are still working through its many twists and turns. We wrote this lengthy recap where we did our level best to sort out all that we learned—and all that was presaged—in the premiere. There were reunions, revelations, and tasty rebuttals (the Stark sisters had the episodes best lines.) Somehow, we only have five episodes left for all of these characters and their various issues, ambitions, and desires to coalesce. It seems impossible to accomplish that in 5 episodes, but then again, the series will have had 73 of them to work this all out by the time it wraps up. With that said, let’s have our first peek at season 8’s second episode:

While we don’t know the title of the upcoming episode (HBO is keeping them under wraps this season until after they air), we do know that there’s likely going to be some major reverberations from the premiere’s big reveal—Jon’s parentage. Granted, we’ve known for quite some time that Jon is part Targaryen, but he hadn’t known (and he slept with his aunt, Daenerys, before knowing!) until Samwell Tarly delivered the news. How will Jon react? How will Dany react once Jon tells her (assuming he tells her) that he’s not only her nephew, he’s the rightful ruler of the Seven Kingdoms, not her?

Again, there are only five episodes left to sort this stuff out, but from the episode 2 preview, it looks like before the Jon/Dany dynamic takes center stage, the spotlight will belong, in part, to Jaime Lannister.

Jamie returned to Winterfell at the very end of the premiere. He promptly spotted Bran Stark—who he pushed out of a window in the pilot episode and paralyzed. So yeah, Jaime’s not exactly a welcome figure in the North. The teaser gives us another person with understandable beef against Sir Jaime—Dany. Jaime earned his moniker Kingslayer by killing her father, after all. Jaime will need to prove he’s not the same man he once was; our money’s on Brienne helping him make that case.

The teaser seems to suggest that Jon will not tell Dany about their true relationship just yet. In fact, what we have here is the battle of wits—and pride—between Dany and Sansa. There’s also hints at Arya’s ongoing obsession with her kill list—Cersei being number one—and the coming army of the dead. Dany’s dragons—which Jon can now ride—better be ready.

“How long do we have?” Jon asks Tormund. The look on Tormund’s face says it all.

Winter is here. The night is long and full of terrors. Who will survive? We’ll find out a bit more in six days.