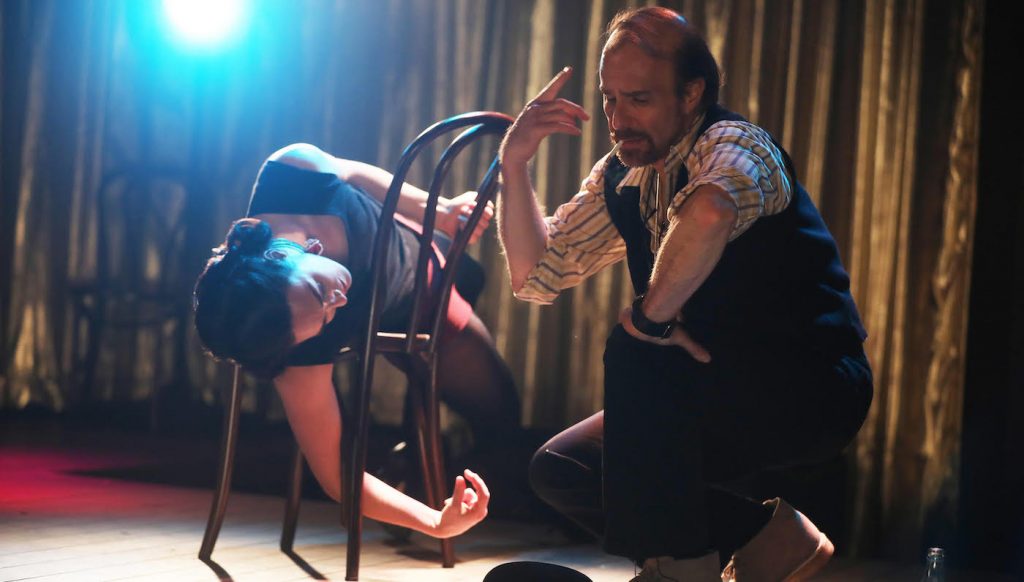 Director-choreographer Bob Fosse had nearly everything an auteur could desire in 1973. That was the year he became the only person in history to win one Oscar (Cabaret), four Emmys (Liza with a Z), and two Tonys (Pippin) inside of a year. He also had a gifted wife in the person of four-time Tony-winning dancer/muse/collaborator Gwen Verdon. But as portrayed by Oscar-winner Sam Rockwell in Fosse/Verdon (premiering Tuesday, April 9 on FX), one thing Fosse didn’t have was hair.

Enter Christopher Fulton, hair department head for the eight-episode miniseries. Fulton spent the past winter transforming Rockwell into various incarnations of Fosse, the brilliant but self-destructive talent burns through three decades of a steadily-receding hairline. Fulton says, “Bob Fosse was so self-conscious about losing his hair, he wore a fedora and incorporated hats into his work. The fascinating thing about Fosse is that he had slumped shoulders. Fosse didn’t have a turn-out. He was losing his hair. He was constantly smoking. Yet he took all of these deficits and turned them into an incredible personal style.”

Fulton, speaking from his Los Angeles home during a day off from his latest project Westworld, developed Fosse’s signature comb-over after going through the director’s family photos, studying pictures at the Library of Congress and conducting his own field research on the streets of New York. “It almost became a weird fetish thing for me, taking photos of balding men with comb-overs,” Fulton laughs. “I’d be in a restaurant or waiting in line or something and if I saw a man with a comb-over and extreme receding hairline, I’d just take a photo. I wanted Sam’s hair to look lived in and natural. I wanted the viewer really falls into the 1950s or falls into the 1970s. A bad wig is the worst thing you can do on a show. It takes you right out the story.”

Working on Fosse/Verdon through the winter, Fulton established an hour-long morning makeover routine. He’d shave Rockwell’s head while they listened to the actor’s favorite jazz trumpet player Chet Baker. He’d then glue strands of hair to his bare scalp. “I designed this custom-made horse-shoe wig for once we get into Cabaret period and pretty much the rest of Fosse’s life,” Fulton says. “The hardest thing to get right was this little tuft of hair at the front of his scalp that kind of springs out. Sam and I referred to that as ‘the libido.’ Men hang onto that for dear life.”

After Fosse survives the heart attack famously chronicled in his 1979 movie All That Jazz, the workaholic perfectionist continued to work until his death in 1987.  Reflecting the final years, Fulton says, “The horseshoe wig stayed the same and I’d just interchange the ‘islands’ in the front of Sam’s head, different textures, and colors and shapes, to tell the story of his aging.”

Turning Michelle Williams into an on-screen version of dancer-singer Gwen Verdon, presented a different challenge for Fulton: hair color. “Gwen Verdon had flaming red hair,” he says. “It’s that signature ‘Damn Yankees’ look everybody knows her for. When I met Michelle in New York the first day working on the show, she’s this gorgeous pixie blonde. I remember thinking ‘How am I going to put a red wig on this woman and make it realistic?’ Because the last thing I wanted to do was created visions of Ronald McDonald or Little Orphan Annie!”

Fulton spent weeks perfecting four different wigs for Williams. He began with a curly haired bob capturing her persona as a perky musical theater song-and-dance sensation. “In the 1950s, Gwen’s this Broadway girl trying to come up in the world. She’s prim and a little buttoned up, so the hair is tight-set and proper. Then she meets Fosse and becomes a little more sexual, so I loosened up the curl for her seventies wigs. Gwen had a really difficult relationship with Bob. Her hair needed to look a little unraveled and unkempt at times. That’s how I approached Michelle’s seventies wigs.”

Working with Canadian wig-maker Stacey Butterworth, Fulton made head casts and designed 50 custom hair pieces for all the key characters including “page boy”-bobbed Liza Minnelli (Kelli Barett); Neil Simon (Nate Corddry) and his wife Joan (Aya Cash); Fosse’s salt-and-pepper haired best friend, writer Paddy Chayefsky (Norbert Leo Butz); and contentious producer Cy Feuer (Paul Reiser). He and his team even created wigs for all the chorus girls appearing in the re-creation of Sally Bowles’ iconic Cabaret number “Mein Herr.” “We pored over every single [archival] photo dissecting what the hair for each girl looked like and discovered ‘Oh my God, one of the ‘Mein Herr’ girls is actually a boy in a wig.'”

For Fulton, the quest for authenticity reflected his deep respect for the Fosse-Verdon legacy. “We wanted pinpoint accuracy because so many people remember these musical numbers. For me, the big payoff would be if watch the show and say ‘She looks just like Liza.’ I was so finicky about every single detail, I certainly made everyone crazy.”