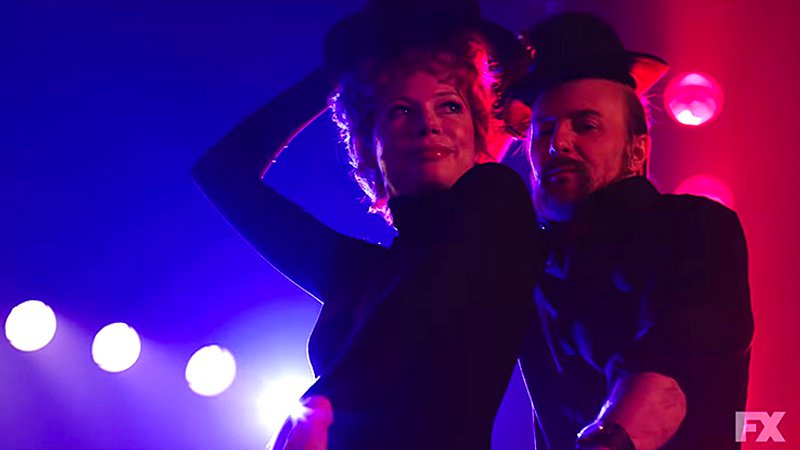 FX saw big wins at the Golden Globes last night with The Assassination of Gianni Versace: American Crime Story and The Americans. ACS is an anthology series making Versace a one-time season and The Americans aired its final season in 2018. So, what is the next big thing for the groundbreaking channel? Hopefully, Fosse/Verdon because my inner theater nerd is shaken by the new trailer.

Premiering last night during the awards, Michelle Williams and Sam Rockwell as Gwen Verdon and Bob Fosse are all that jazz and more. The iconic choreography team has a style you can spot from the balcony and it’s appropriately glamorized in the first peek at the series. Seduction, fishnet stockings, and obviously plenty of wrist snapping are packed into the extravagant and indulgent one-minute teaser. Oh, there’s also a snippet of Williams and Rockwell in the famous yellow tops from a Damn Yankees number the couple famously danced together. It’s all too much.

This is just an initial snapshot, but the series looks more romanticized than even Fosse’s own film All That Jazz where he directed Roy Schneider as a fictionalized version of himself named Joe Gideon. A brilliant choreographer, Fosse was also honest about his struggles with addiction and womanizing. In turn, the characters he choreographed were often colorful and even seedy. Think Chicago, Cabaret, and Sweet Charity. He famously demanded precision and perfection, which is alluded to in the only dialogue from the trailer. After a dazzling display, he orders a dancer, “Again.”

Verdon, a Broadway bombshell, was the greatest dancer who ever set foot on stage. Fosse and Verdon became an indomitable pair working together for years and marrying. Their incredible work translated to the screen during a heyday for movie musicals. Despite ending his marriage with Verdon to pursue famed dancer Ann Reinking, Fosse died in Verdon’s arms in 1987.

If you want to read up before watching the series, the new show was inspired by Sam Wasson’s biography Fosse. Current Broadway titan Lin-Manuel Miranda is executive producing the series.

Fosse/Verdon premieres on FX in April.