Captain Marvel‘s Carol Danvers (Brie Larson) is a part human part alien superhero who can 100% kick-ass. Seriously. Watch out Thanos. Directors Anna Boden and Ryan Fleck propelled Marvel’s most potent superhero to the big screen this weekend and the results are a critical and commercial smash. Meet the creative team who helped Boden, Fleck and Larson create a Marvel movie unlike any other.

The allegory catapults us to the Kree home planet of Hala where Danvers already touts her powers and is training as a member of Starforce, a Kree elite military team led by Yon-Rogg (Jude Law). After a mission goes awry she’s captured by Talos (Ben Mendelsohn), a shape-shifting Skrull, who tries to extract information from her mind to win the long-standing Kree-Skrull War. Escaping, she tracks them to Earth to try and end it herself.

Though part of the Marvel Cinematic Universe, the visual language is distinct as its set in a pre-Avengers world. In creating the signature style production designer Andy Nicholson (Gravity) detailed three individual ethos: the Skrulls, Krees and then life on Earth; the latter drawing on colors and textures to match its ‘90s timeline.

For the Skrulls, charmed green hues were met with curved and asymmetrical lines; their ships an extension of the look layered in ceramic and skeleton-like elements to add to an organic appeal.

The Krees were wrapped in blue tones with a very angular symmetrical guise; a more brutalist appearance with spaceships bound in metallic origins. “It was important for us to make each world simple but keep them interesting,” notes Nicholson. “Detailing the silhouettes in the buildings, spacecraft and interiors allowed us to create a dynamic contrast between the two as we wanted the audience to instantly know where they were in the story.” 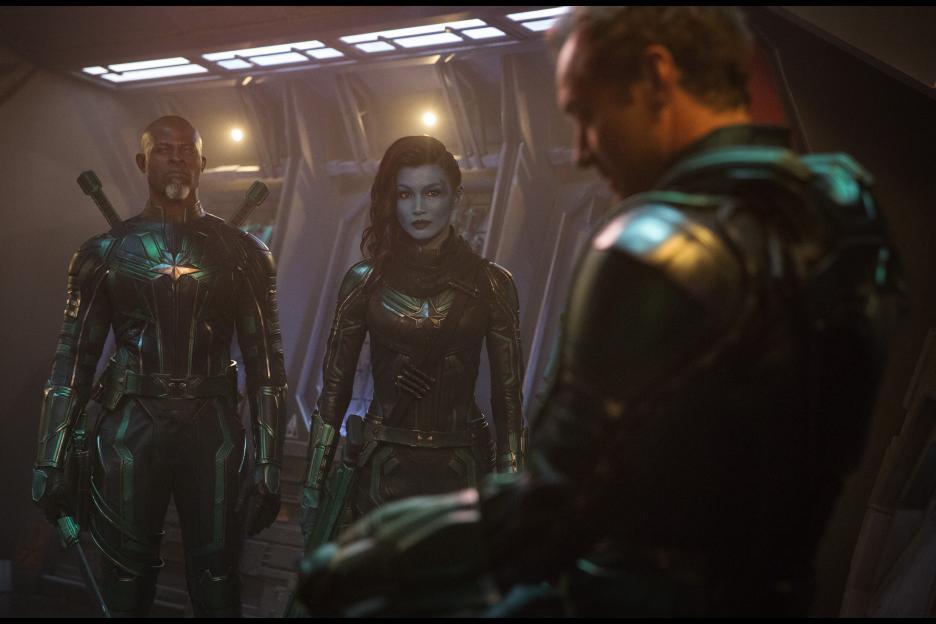 Cinematographer Ben Davis (Three Billboards Outside Ebbing, Missouri) further immersed the ‘90s look with the thought of shooting on film but leaned on large-format digital cameras to connect its visual tissue. However, the desired film appearance was not all lost as the cinematographer detailed a palette around old Kodak film stocks, specifically 5247 and 5248 for their color vitality, softness, and grain. Lens choice added to the style. Panavision Sphero 65s, a cleaner, higher contrast lens portrayed life in outer space while special vintage lenses based on the Canon K35s were drafted by Panavision for scenes on the blue planet for their soft and curvy appeal.

Davis also elevated the photography by embracing conventional filmmaking methods of the ‘80s and ‘90s to ground the action while a handheld organic approach—framed by camera operators Geoff Haley (a camera), Sarah Levy (b camera) and Chris Duskin (c camera)—delivered a florid intimacy with the characters. “We tried to create a very personal story with Carol and wanted the camera to follow her character arc and visually connect the audience to her,” says Davis, who’s also lens’d Doctor Strange, Avengers: Age of Ultron and Guardians of the Galaxy.

For its entire 75-day shooting schedule production found itself in the Los Angeles area accepting its natural surroundings. In a scene when Danvers lands (more like crashes) on Earth, she finds herself inside a Blockbuster video store. Nicholson was able to transform a shopping mall built in the ‘70s for the sequence that has her meeting Nick Fury (Samuel Jackson) for the first time. Visual Effects Supervisor Christopher Townsend (Guardians of the Galaxy Vol. 2) notes that “LA hasn’t changed that much in terms of its larger scope,” and working with production design, the art department and locations, they were able to remove any hints of modern society.

One key story element that needed development was the Supreme Intelligence, a virtual chamber of the greatest minds of the Kree people. It’s a place Starforce warriors visit in order to prepare for battle and each soldier sees something different on the inside. In Danvers’ case, she interacts with Supreme Intelligence played by Annette Bening, who’s somehow part of a past life she’s struggling to figure out.

Built on the stages of Sony Pictures Studios in Culver City, inspiration was drawn from the Museum of Middle Eastern Modern Art (MOMEMA) found in Dubai for its color and how sunlight moves through the arts center. Nicholson designed a 100ft by 80ft space that had an infinite horizon to it and was white in color. He then added texture by using two layers of gobos (arrangements placed in front of a light source to control its shape) to create shards of light that broke up the entire room while visual effects extended its edge-of-space look detailing a tranquil water feature.

“We wanted it to almost feel alive in a very serene and real way,” says Townsend. “We developed a lot of out of the box ideas, approaching it from an artistic standpoint or a mathematic approach—even considering how it looked in the comic books, a large floating green head —but ultimately came back to a simplistic, very graphic world that was visually different from everything else in the film.”

Camera movements in the space were more static as a way to match its aura. “It created a challenge for us because as soon as the camera stopped moving, the space became almost two-dimensional,” admits Townsend. “We fought very hard to get the columns of light as close to the camera as possible in order to sell it as a three-dimensional room. It was important for us to bury the characters in the space instead of it just being a backdrop.”

Davis subliminally added to Danvers’ character arc inside the Supreme Intelligence through wide-angle and telephoto lens choices. “There’s a power struggle there and if you want the person in the foreground to be larger than the person in the background, vice versa or even the same size, you can change the lens size accordingly since the background doesn’t change,” says the cinematographer. As Danvers’ powers take flight, Davis used a wide-angle lens behind her to grow the frame then on the opposing side, a long lens to make everything feel smaller in relation to Captain Marvel.

Throughout the process, directors Boden and Fleck pushed collaborators to make a naturalistic and grounded character story that’s part of a larger than life superhero movie. Even when Captain Marvel displays her full powers where light energy emits from her body, it needed to feel sympathetic to the rest of the visual language established in the film. Visual effects referenced how oil flows on water, Tesla coils and solar flares to keep the moment grounded in realism. “Anna and Ryan wanted to maintain a little bit of that indie, almost analog feel in the movie,” says Townsend. “It allowed us to collaborate in a way to establish something special.”