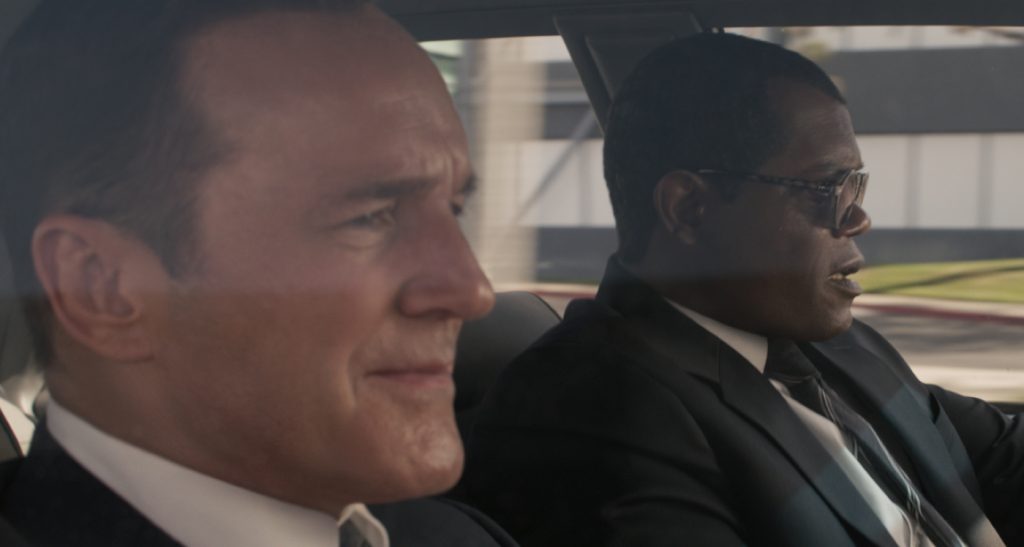 Almost as proof of Peter Allen’s lyric that “everything old is new again,” the 90’s-set Captain Marvel has fun not only giddily referencing contemporaneous culture, but even retconning the MCU a bit.

It starts with the current incarnation of Captain Marvel—the former Ms. Marvel, Carol Danvers—as played by Brie Larson. Our heroine falls to Earth and lands, in this case, smack dab in a Blockbuster video store.

In comments during a recent cast press conference, co-director and writer Ryan Fleck (along with fellow co-director and writer Anna Boden), mentioned that he “actually worked at a Blockbuster in 1995, so that brought back a lot of memories, creating that set,” and it’s where the delighted riffing off other films begins in earnest, with the torching of a True Lies standee. “We tried to use The Mask,” for the combustible signage,  Fleck recounts, “because of Jim Carrey. We thought that would be funny—but the studio didn’t give us permission to use it, so, bummer.”

But that didn’t slow the film’s numerous other cinematic references. In the course of dialogue and action sequences, Captain Marvel riffs on The French Connection, Narrow Margin, Top Gun, The Right Stuff, Indiana Jones, and even The Godfather.

The titular character’s own comic book past is even referenced. This is shown through various “practical” uniforms and space-or-water gear that echo how Captain Marvel looked even back when she was still a he, in assorted pre-Danvers incarnations.

These weren’t the only histories being evoked: The only “recurring” characters in this particular Marvel movie (at least, until we get to the post-credits sequences) are two S.H.I.E.L.D. agents making what is, sequentially, their “first” appearance in MCU continuity. They are, of course, Clark Gregg’s Agent Coulson, and even more so, Samuel L. Jackson’s Nick Fury, who basically shares the film with the good Captain.

In a separate interview, Jackson even called it “more of a playground kind of movie,” since he’d worked with Larson before. But he’d also worked with Gregg outside the MCU, even farther back: “It’s always good to work with Clark. We’ve known each other a very long time—back when I was shooting Pulp Fiction. When I was off, Clark actually directed me in a play… which was kinda great.”

The play being Distant Fires, about racial tensions—quotas and riots—expressed on a job construction site as one character seeks to become a local union’s first African American construction foreman.

Here, Coulson is very much a novice to Fury’s more seasoned agent, but Gregg says they told him “ they’re going to give you more hair and make you look younger. Oh, and Brie Larson is going to be Captain Marvel and I was like, okay, where do I go?”

Marvel president Kevin Feige, while calling the de-aging technology “spectacular—we’ve done it in a number of films and I think this represents the peak,” also allows that “the two people up here who we did do it to, Sam Jackson and Clark Gregg, are the two human beings on earth who don’t need it.  I urge you to Google them in 1995.”

Or perhaps “AltaVista” them—since that early search engine also makes an appearance in the film.

Jackson says his own de-aging was made easier through a different kind of database—all the MCU footage on him they already had: “They started exploring different things that I had done before so that they could use facial expressions that were already there. Fortunately for me, I’d done, you know, like three movies before this one,” he jokes “so they had stuff to refer to. It was cool. They put the wig on me and they put dots on my face so it kind of felt like I was in Wakanda. It was just me and dots on my face. And having fun with Brie.”

As for that 90’s “playground,” the rest of the cast took turns saying which artifact of 90’s culture they’d still like to have fun with—or bring back. For Larson, it was butterfly clips, and for Boden, it was “pay phones. Because then I wouldn’t have to check my email all the time.”

Gregg said he wished “MTV had videos again,” and for Jackson, it was laser discs.

“He’s very passionate about laser discs, by the way,” Larson added. “That’s not a joke.”

Though being able to joke around, at least a little, is what also drew Jackson to playing an earlier incarnation of his character, whom he describes as “a kinder, gentler, not so cynical world-weary, chip-on-the-shoulder Nick Fury. Who hadn’t met anyone from another universe just yet and is sort of looking at the crazy lady, trying to figure out why she thinks she’s an alien and what all that means. It’s kind of fun to not be the all-knowing, you know, angry persuader that Nick Fury always is. It’s even more refreshing to have two eyes, so I don’t have to cover one eye while I was learning my lines.” Though even the eventual loss of that eye gets a new, and surprising, origin story here.

Ultimately, Gregg says he enjoyed the journey upriver, as it were, to his own character’s roots. “A very innocent, exciting space…I found it really moving. “

Meanwhile, the film itself is busily moving across the decades—and into theaters nationwide—today.