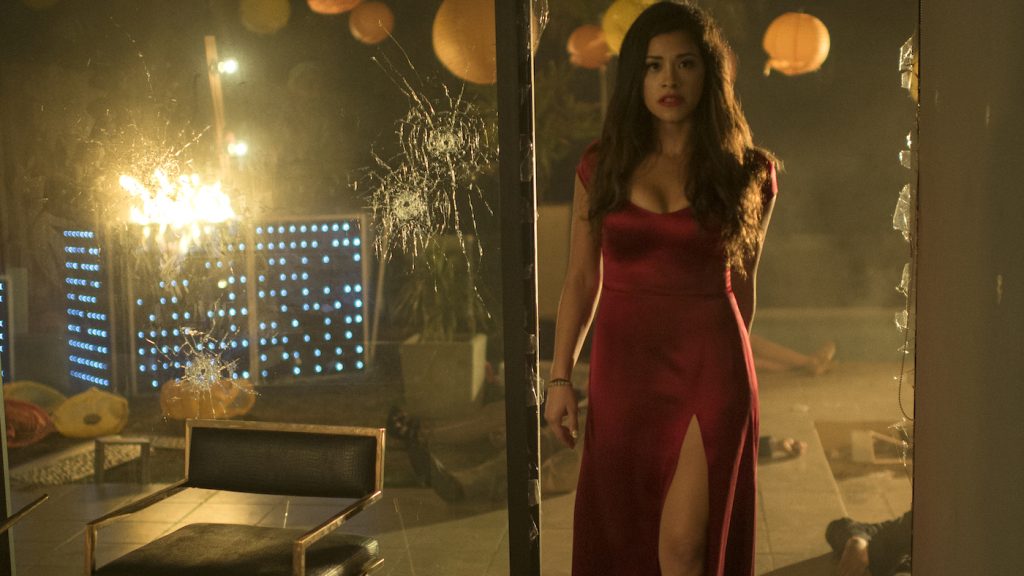 Catherine Hardwicke was 48 years old when she directed her first feature-length film. That movie, Thirteen, a dark look at a tumultuous mother-daughter relationship, garnered Golden Globe nominations for its stars, Holly Hunter and Evan Rachel Wood, as well as an Oscar nod for Hunter and an Independent Spirit Award for Nikki Reed.

Though by Hollywood standards she came a bit late to directing, the success of Thirteen demonstrated she was meant to be at the helm. Hardwicke, who started out as an architect before studying film at UCLA, and who also has cred as a production designer and screenwriter, went on to direct a diverse slate of films — Twilight, Lords of Dogtown, Red Riding Hood and Miss You Already among them.

Her latest, Miss Bala, a remake of the 2011 Spanish film of the same name, serves as yet another example of the richness of her storytelling. The action-thriller features Gina Rodriguez (Jane the Virgin) as Gloria, a makeup artist from Los Angeles visiting her best friend, Suzu, in Tijuana. When Suzu goes missing, Gloria embarks on a tense and dangerous search, during which she is kidnapped by and forced to work for the leader of a drug cartel (Ismael Cruz Cordova), while simultaneously serving as an informant for the DEA. The movie follows Gloria as she navigates her way between these opposing forces and finds the strength and ingenuity she needs to survive.

Hardwicke recently spoke with The Credits about Miss Bala — how she choreographed the central shootout, why Rodriguez was “the one” to play Gloria, and what hiring a Latinx cast and crew brought to the film’s realism. This interview has been edited for length and clarity.

How did the idea come about to remake the film and does it differ at all from the original in terms of story?

Kevin Misher, he’s one of the producers, he got the idea to do this remake. He saw the original and he saw a way to expand the story and make it more relatable and global because the original story was inspired by a woman who was in a beauty contest and stayed in Mexico and then she was discovered by a cartel leader. So what Kevin’s idea was, was to make it a Mexican-American, a Latina-American, and add this level of identity for the two lead characters — that they don’t feel like they’re 100% percent American, yet they’re not 100% Latino, too. They don’t speak Spanish fluently, and so it’s something that I thought made it really relatable to a lot of people I know.

Another thing that’s very different, the whole DEA and the double agent, that’s something that’s not in the original. Also, in the original, the lead character was very passive. So that was a big effort for Gina and myself and the new writer, who’s from Mexico also, to make this woman more empowered and really try to be more clever and skillful — even though she’s not trained like a Navy Seal or anything, doesn’t have any combat skills — but she still finds a way to save herself.

Jane the Virgin is quite different from Miss Bala. What about Gina Rodriguez said ‘yes’ to you and the producers?

Well, I think that one thing that’s great about Gina is, as likable as she is, we knew that you would instantly relate to her. Also, she has an inner strength that I think is kind of self-evident. She just exudes it in a way, which this character had to have. She finds a way to stay calm and to keep that poker face, even when she’s being played or having to play two different sides of the fence — the DEA, the cartel. And then Gina is very expressive, even just her eyes. You feel so much for her, because she can’t give anything away. She doesn’t have anyone to talk to or confide in through the movie, but you still feel what she’s feeling. I guess seeing her on Jane the Virgin and then meeting with her in person and talking to her, I saw that she would just really put her heart and soul into it, and she had all the goods.

There are so many twists and turns, in addition to the action and violence. How did you approach this genre?

I think what I tried to do in this is really sort of method directing, trying to feel at every moment what I would feel if I was Gloria. If that happened to me, what would I do, how would I get out of this? Gina and I looked at everything that we had her character do. Could she do it, could I do it? I personally have actually been in a few scary situations with a gun pointed at my head, and I’ve had the opportunity to learn about myself, what kind of courage I had. That made me very interested in this project.

Were the gunfights very challenging to choreograph and shoot?

Yeah, I actually really love action. I’ve studied a lot of action movies. Of course, I had a great second unit director and stunt coordinator, but I personally got out all my little cars and made my own action, did my little war diagrams with moving cars and figuring it out. Then we went to the real locations and kind of acted it all out. How far could Gloria really run, which should be the sniper building, how far could a guy shoot, why would he then be shooting in this direction? So it was very fun to stage it all and figure out the strategy to make it believable and terrifying.

Well, it certainly was. Speaking of location, you filmed this movie entirely in Mexico, correct?

Mostly all Tijuana. You know, it’s such an interesting landscape down there that we have not seen on film much at all. So that was, for me, exciting — sort of like virgin territory, to go film locations that most people haven’t seen.

Was filming there for budgetary reasons or authenticity or both?

Well, when I first signed on to the job, I had gone down there and scouted around a few months before. I’m trained as an architect, so I was very attracted to the modern architecture that is kind of unexpected in Tijuana. And so I thought, wow, this is a great opportunity to really showcase elements of Mexico that you don’t see and you don’t think about when you think about Tijuana. We’re more used to seeing the dusty, Mexico stucco buildings. I wanted to see that, but I wanted to see the new stuff, too, and all the new energy there. And so when it came up where should we film —Albuquerque, New Mexico, before Tijuana? — I’m like, no, [laughs] lets go to the real place. I’m from the Mexican border of Texas, so I love border towns and I love Mexico. And I was just like, hell yeah, let’s go down there and use a full-on Mexican crew, Mexican cast, and all the real locations and get all those real textures that you just can’t fake.

You mentioned the cast and crew being Latino. Were you involved in this hiring? What impact did this have on the film?

Some of the actors did come from Mexico City, but as many actors as we could we actually hired from Tijuana. We hired literally local actors that had the right northern Mexico accent, the Baja accent. And then we had a lot of crew members from Tijuana, and some people from Mexico City. It just added a level of authenticity.

Do you feel hopeful for women filmmakers? I read that you work one-on-one with female directors, doing workshops focusing on confidence and planning, and mentoring.

Yes, I do. I feel like Miss Bala is right there, a very hopeful note that they hired a woman director to do an action movie or a thriller. They hired a Latina woman as the lead. You know, more studios are taking these chances. I mean, obviously after Patty Jenkins did such a spectacular job with Wonder Woman, that just gives women ammo and their agents ammo to say, ‘Look, trust a woman to do this. Give us a chance.’ So we love every success. It helps pave the way for the next success.