Director Catherine Hardwicke is well into her third successful career. The former architect was one of the most ambitious, consistently excellent production designers in Hollywood, working on gorgeous, genre-defying projects like Three Kings for David O. Russell and Vanilla Sky for Cameron Crowe. She launched her directing career with the excellent Thirteen, which she co-wrote, about a young girl’s relationship with her mother as she begins experimenting with drugs, sex and crime. The film earned Holly Hunter an Oscar nomination for Best Actress in a Supporting Role, and proved Hardwicke could do just about anything on a film set. From there she went on to direct the surf-and-skateboard drama Lords of Dogtown, set in Venice Beach in the 1970s, and then turned to a little film high school drama called Twilight. It was, at the time, a very modestly budgeted teen love story (albeit with one of the teens as a vampire) that two studios had already passed on. It became, of course, a cinematic phenomenon.

Her latest film, Miss You Already is a funny, heartbreaking story about two best friends, Jess (Drew Barrymore) and Milly (Toni Collette) who are forced to reevaluate everything when one begins a family while the other falls ill. The film left few dry eyes when it was screened at the third annual Middleburg Film Festival, where I caught up with Hardwicke to discuss directing, designing, and the TV show she’s currently working on about her first love—architecture.

So let's start with Miss You Already, which just elicited a lot of laughs and a lot of tears here in Middlesburg. How do you feel it's going so far?

So far so good. People have said some pretty amazing things from the heart after seeing the film. It's certainly touches people, the friendship, the families, dealing with tough times…and the movie is very funny. It's written by this comedian, Morwenna Banks, who's in London and also the voice of Peppa Pig, this hilarious cartoon that a lot of kids watch. She's very funny, and she wanted to keep that lightness and life affirming thing in the two friends, when one's down the other can joke about it and bring her back up. She wanted to keep it funny, and you hear laughter in the theater, but then, it starts to get little heavy (laughs). 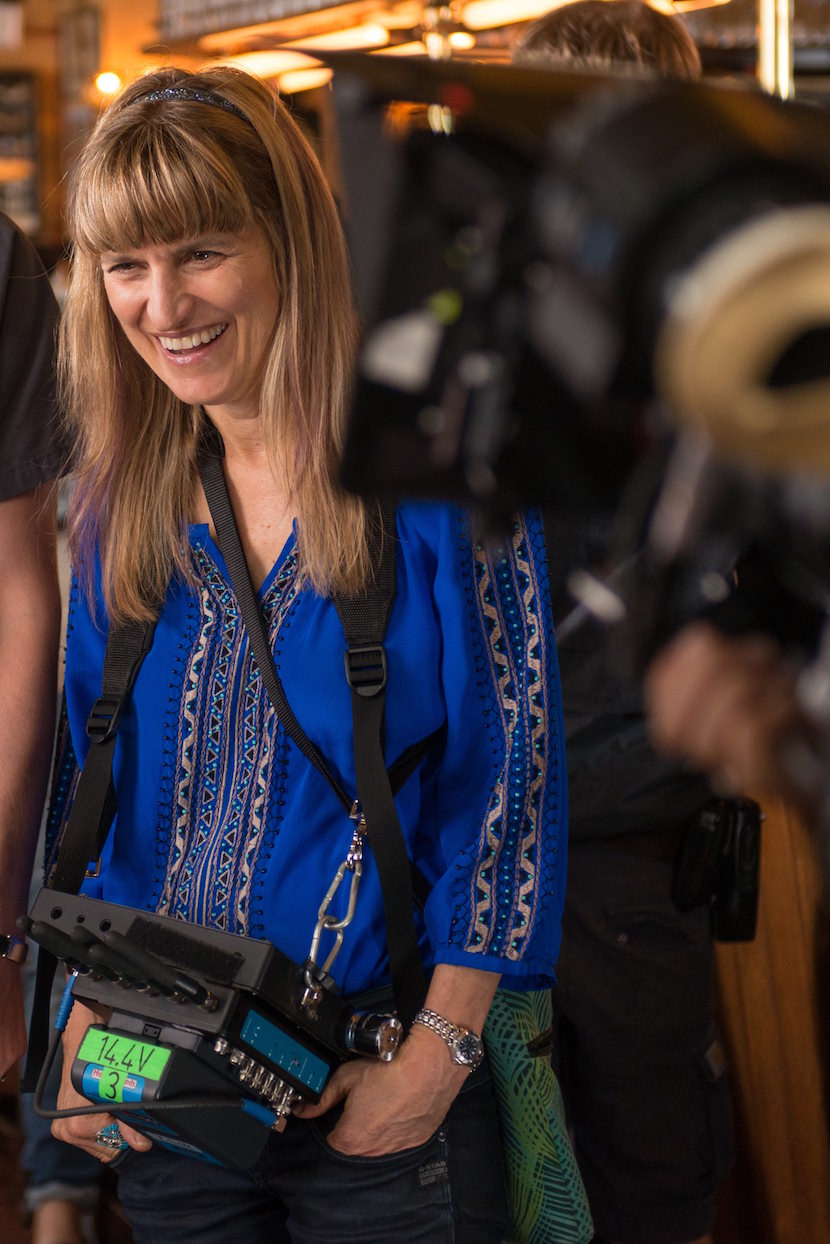 So how did you find this project, or how'd it find you?

I did the movie Thirteen, and we were in the London Film Festival, and the producer of this movie met me there and said he'd been thinking that he wanted to do a movie with me. He had this script, and he said he was riding his bike through London and he just thought of me. So I got it, and I liked the script, but there were certain things I wanted to add and do. Like every director, you've got to put your fingerprints on it and breathe your own life into. So Morwenna came out to L.A. and we did a table read with as many Brits as we could get, and improv'd the scenes. I added this one scene where they go to the Moors, because I'd done that, a road trip, bucket list kind of thing. So you start to shape it and figuring out, 'How will it look? How will it feel?'

It was shot in England?

All in London. And two day sup in the Moors, in Yorkshire. It's really fun to work in London, it's a vibrant city, it just pops.

Is it conducive for filming? Do they make it easy?

Well it's super congested, so it's very hard to move around. But if you don't have a company move during the day and just go to one location, you can move the trucks the night before and stay there all day. And the locations are cinematically ridiculous, because you've got, what, a thousand years of cool architecture mixed with a lot of super hip new architecture, so the juxtaposition is fascinating. 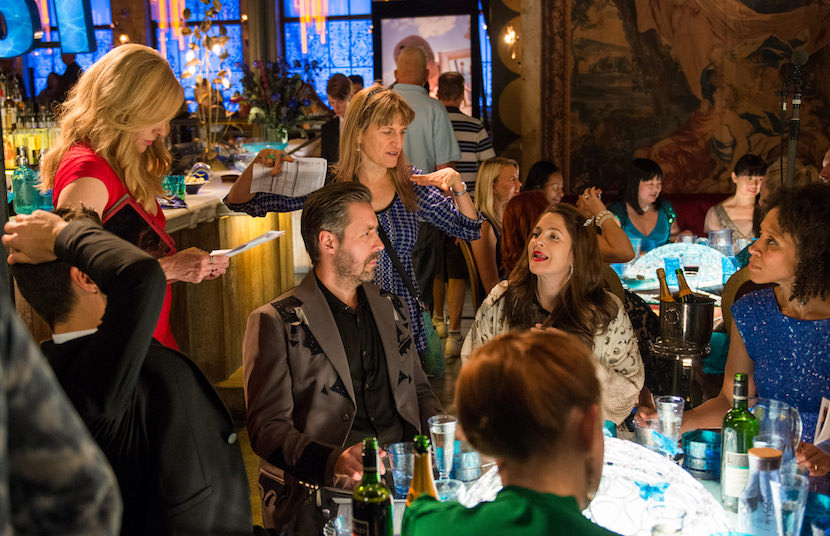 So because of your background as a production designer, how does that inform the way you direct?

For me it's been really great because I was an architect before I was a production designer, so my thing is I've got structural visualization, I like it call it, where you can just walk to an empty place and see the whole thing, the buildings or the scene growing around me, or like the case of Three Kings with David O. Russell, the job was to recreate Iraq within a one hour plane flight from L.A., because George Clooney was still on ER at the time, he had to work four days a week on ER and three days a week on our movie. I got to build Iraq, okay, but how do I do that?

I went to an old abandoned copper mine and I took David out there to show him the space and my drawings, and everybody would just be looking at some sand thinking, 'Uh oh,what?' But that's what you have to do as an architect or a production designer or a director—literally make something out of nothing. You read the words and ask,  'How can I turn this into something cool.'

How did you turn a copper mine and the surrounding area into what in the film was such a lushly shot, believably Iraqi desert?

Well now we have a lot more access to see what Iraq's deserts look like, but back then our troops weren't there, we weren't getting any photos, so I was literally finding Iraqi refugees and having them bring their scrapbooks and trying to find real details of Iraq. It was really difficult at that time. But then I'd go in the copper mine, where I'd done another movie called Tank Girl, and so I knew there was all these freakin' crazy, weird bunkers and equipment that already gives you a heads start. Also, the land is devastated, all the vegetation is ruined, and that's the part of Iraq we were trying to recreate. A U.S. desert is very lush, like if you go to New Mexico or Arizona, there's bushes, it's beautiful, and that doesn't match Iraq. So the copper mine, we built the set into old bunkers, near old machinery, all that landscape was devastated.

What was your experience like working on the first Twilight? Did you have any idea it was going to become this huge phenomenon?

It wasn't known that Twilight was going to be a big franchise at the time. They didn't micromanage me hardly at all, like they'll do on most franchises. Nobody thought it would be—it was rejected by Paramount and put into turnaround, it was rejected by Fox, and nobody thought it would make any money. When the movie was coming out, they told me, even the weekend before, they said, 'If it makes as much as Sisterhood of the Traveling Pants, we're gonna be happy.' Then we made $69 million the opening weekend. People just didn't see that coming. I had about $37 million to work with, and a couple million went to the writer of the book, and all the other things, so that's still not a big budget. They make rom-coms for that. My goal is, 'How can I pre-visualize it and get the most bang for the buck?' As a designer I tried to do that, and now for myself as a director, I ask, 'How can I maximize the look?'

I imagine your design sensibility had a big impact on your choices while directing it?

Yeah, on Twilight the book was very interior, like, 'Here's what Bella felt about Edward.' One of the big scenes in Twilight in the book was just written in a car. They were driving in a car and she asks him how old he is, and he says seventeen, and she realizes that's not true and he's a vampire…in a car. And that's kind of cinematically boring; he's locked in his seat, she's locked in her seat, and you've got angle one, two or three. So I said no, I want that out in the woods, I want to use a techno crane, I want to have them walking and moving in that scene. So that's part of my job, to figure out how to make it more cinematically robust and exciting. Or simply more visual.

So with Miss You Already, what are your hopes for the film?

Well we're coming out in two weeks, opening against James Bond (Spectre), and we hope we beat it. (Laughs). This is a film that needs to find an audience. We don't have a big add budget, but people see it and relate to it.

What do you have coming up that you're excited about?

Stargirl is one we're trying to get, there's one script I just wrote that's a true story, called One Track Mind, that's very fun.

Can you tell me about it?

I can say a little bit. It's a true story, kind of the origin story of the most successful and the most foul-mouthed song writer in history (laughs).

It's a real person?

This is a fun piece of trivia, I'll have to think about who this could be.

I also co-wrote a pilot set in the architecture world that USA is looking at as we speak. Think about it like a House of Cards but in the world of architecture. There's a lot of intrigue, and my tagline for that is 'What happens when extraordinary vision meets extraordinary greed?' You get out of architecture school and you think you're going to make the coolest, greenest buildings, there gonna be awesome, and you're gonna help third world countries, then the developer is like, 'How do I make my money?' So how do you balance your artistic dreams, altruistic dreams with reality?

An architect show is a great idea.

Everyone is getting really into design. And I love House of Cards and Scandal, so why not put it in a visually stimulating world where we can see cool ideas. Bjarke Ingels, he's a wild, Danish architect, he'd be one of consultants. He's like a sexy, architect Matt Damon, he's done two TED talks, so there's a wild, sexy and intense passionate world out there.