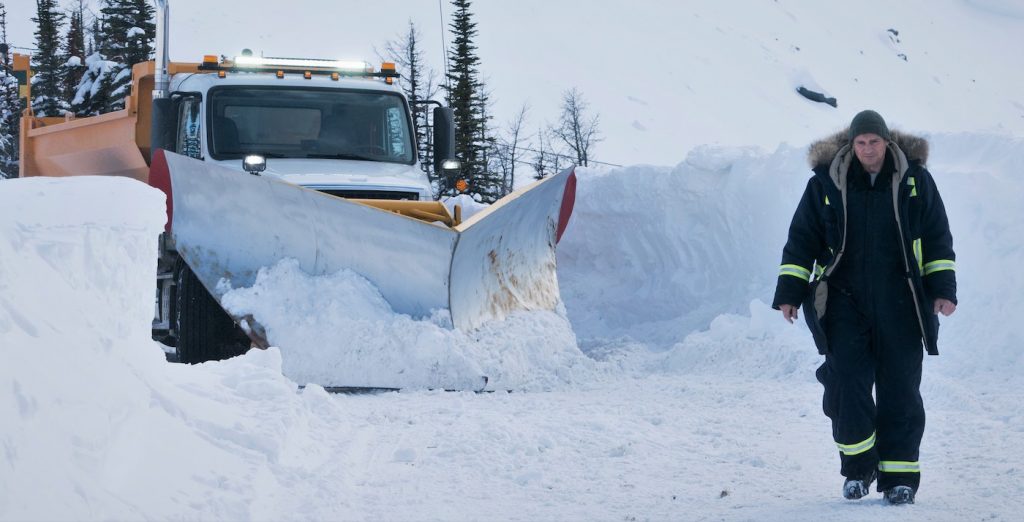 In Hans Petter Moland‘s Cold Pursuit, Liam Neeson plays a humble snowplow driver named Nels Coxman living in the winter wonderland of Kehoe, Colorado. The film opens with Nels receiving Kehoe’s ‘Citizen of the Year’ award, which hs gratefully (and awkwardly) accepts. His beaming wife, Grace (Laura Dern) looks on. All is well. For roughly four minutes or so. In no time at all, the fuzzy, warm feelings give way to the title’s promise; the Coxman’s son Kyle is found dead of an apparent drug overdose. Grace is heartbroken; Nels is suspicious. The marriage dissolves quicker than snow in a microwave. Nels finds out from a terrified, beaten-to-a-pulp coworker of Kyle’s that his suspicions were correct; Kyle didn’t overdose, he was murdered. Nels begins his cold pursuit of his son’s killers one at a time.

There are two things to note right off the bat about Moland’s film; it is a remake of his own 2014 Norweigan film Order of Disappearance, and second, Nels pursuit is as ruthless as anything we’ve seen in Neeson’s late-career turn as a bonafide action star. It was also shot largely outdoors in conditions not dissimilar from our current Polar Vortex.

“The snow is real,” Moland assured me when I spoke to him. There are scenes in which Neeson’s snowplow is tunneling out a road with snowbanks on either side that rise well above the cars. It’s a preposterous amount of snow. “The enormous snowbanks were shot in the mountains on the west coast of Norway. Those roads are only open in the spring. They’re not opened during winter.”

Filming in Norway and Alberta, Canada, Moland, his cast and his crew had plenty of real snow and beautiful scenery to use, but that didn’t mean filming was easy. In fact, the snow itself wasn’t just one thing, but many, and each version of it required a different filming mentality.

“I think most people who are not familiar with snow underestimate that snow is a lot of different things,” Moland says. “Dry snow is radically different from wet snow, both visually and also in terms of moving around it. Even for a snowplow, to throw up a beautiful plume of snow when it’s dry it’s quite easy, but when it’s wet it’s a whole different issue. The plow must drive much, much faster in order to get wet snow into the air like that.”

Nels Coxman’s snowplow goes from being his profession to one the weapons he deploys against the cadre of Colorado gangsters who are responsible for his son’s death. One of the unusual themes of Cold Pursuit is that this is a very violent film that actually takes a moment to reflect on every death. Moland uses title cards anytime a character meets his maker—from the first man Nels tracks down (the unfortunate fellow in the clip below) to the last person who bites the snow (apologies). The title cards include the character’s name, their religion, and their date of birth and death. It’s a moment to reflect on what’s just happened.

“Any filmmaker who subjects characters to violence needs to think about it,” Moland says. “My attitude is, if you have too much violence, it’s not reflected upon. This film is not lionizing criminals, quite the opposite. It’s saying something about all these people who tend to create myths about criminals, who in fact are just as dumb and stupid as the rest of us. Instead of killing them off, the title cards take notice that one more human being actually left this earth. But [Cold Pursuit] is a comedy, so, I’m not necessarily intending to get the audience to cry about the violence, just to reflect on it. There are an awful lot of people dying in this film, we just take notice of it.”

Of all the bad guys that Nels has to deal with, none are as bad as Viking (Tom Bateman). He is the big boss of the largest Colorado drug cartel, the one who decides who gets to live and who has to die. Bateman’s portrayal is one of an entitled, sociopathic rich boy who metes out death without blinking.

“I had a very specific thought about him; we had a rationale and idea behind everything that he does, but he’s so detached from any humanity,” Moland says. “He’s a narcissist, he’s oblivious to other people’s needs or pain, and it’s all about him. And I think the people around him, they just shut up and hide their true lives away from him because they know how he’s capable of lashing out or bullying people for whatever weakness or character trait that he can exploit,” he says. “These are people who have accepted that regime; it’s quite common that once you’ve accepted the regime, you’d much rather be a part of the regime rather than be singled out for humiliation or ridicule. The mechanism is very common in unhealthy power structures; you have a bastard of a leader and then the people around him who fall in line. I think when you have somebody who is in charge who is as unhealthy as that, everyone around them becomes sick.”

Nels and Viking are on a collision course from the moment Cold Pursuit begins, yet the story doesn’t unfold the way you might assume it will. One thing that everyone who goes to see Cold Pursuit will want and expect is to watch Neeson continue his unlikely turn as a superhero without superpowers, save his grief and rage. He delivers. Hell, he plows.

“Liam comes with some expectations with his phenomenal success in other action films, but for me, first and foremost, he’s just an incredible actor,” Moland says. “Playing somebody who is involved in a film full of accidents, but at the same time playing a very ordinary guy, there’s not a lot of people who can do that. He’s just one of the best actors today, it’s pretty amazing to have him in this film.”