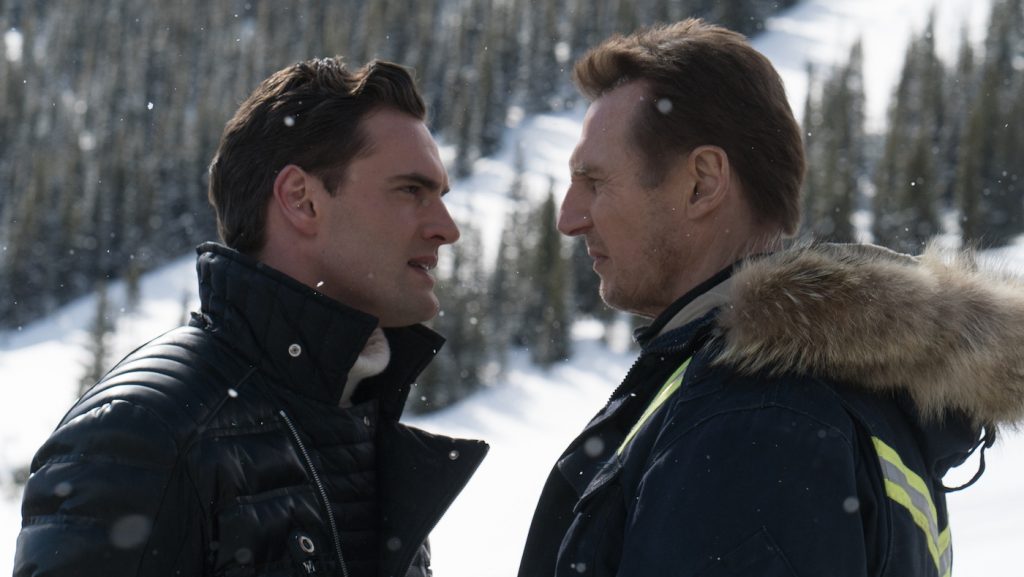 “What makes you think you can kill a man?” William Forsythe’s character asks Nels Coxman (Liam Neeson) at the start of the Cold Pursuit trailer. The question no doubt makes sense within the plot of the film (Nels isn’t some former assassin or ex-cop, he’s a snowplow driver), but it also serves as a winking nod to the fact that Neeson has become, somewhat unexpectedly at first, the most bankable action-star not named Dwayne Johnson in the business, having doled out all sorts of lethal punishment in films for years now. These include Taken, Taken 2, Taken 3, A Walk Among the Tombstones, Non-Stop, Run All Night and The Commuter. In Cold Pursuit, however, Neeson’s character has no experience in the dark arts, but he has read about killing in a crime novel…

The story here has the architecture we’re used to from vengeance plots; Nels lives a quiet, comfortable life with his beloved wife (played by Laura Dern, no less) that’s upended when his son turns up dead from a heroin overdose. The only thing is, Nels is convinced his kid didn’t do drugs. Eventually, Nels finds out who is really responsible for his son’s death, and transforms from a mild-mannered public servant—one who is named Citizen of the Year by his small, upscale ski community—into an avenging angel looking to right the wrong done to his family.

Based on the novel “Kraftidioten” by Kim Fupz Aakeson (which translates to “In Order of Disappearance” in Norwegian), and following the 2014 Norwegian film by Hans Petter Moland, Cold Pursuit presents Neeson yet another opportunity to turn grief into fuel for revenge. The setting here is more Fargo than Taken, and Nels’ mastery over his snowplow and the various implements of mountain life offer him many, many interesting ways to take on the criminal gang that’s responsible for his son’s death (using a crane to drop a tree through a car’s roof is one particularly creative method). The trailer’s undeniably fun, and once Blue Oyster Cult’s “(Don’t Fear) the Reaper” kicks in, you really have no choice but to let go and enjoy the ride.

Check out the trailer for Cold Pursuit below:

COLD PURSUIT, an action thriller infused with irreverent humor, stars Liam Neeson as Nels Coxman, a family man whose quiet life with his wife (Laura Dern) is upended following the mysterious death of their son. Nels’ search for justice turns into a vengeful hunt for Viking (Tom Bateman), a drug lord he believes is connected to the death. As one by one each of Viking’s associates “disappear,” Nels goes from upstanding citizen to ice-cold vigilante, letting nothing – and no one – get in his way.