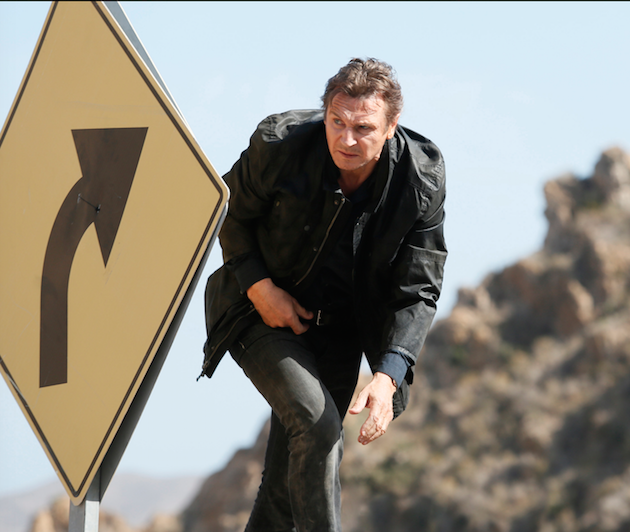 Poor Bryan Mills. He's had a rough couple of years. This CIA operative had put in his time for his country and just wanted to enjoy his retirement. The Sunday paper. Slippers. Maybe a little light gardening. But then, his daughter Kim (Maggie Grace) gets Taken (2008) in France. So that was bad. But then it got worse; she was taken by human sex traffickers. Oof. The thing is, if these monsters had made a list of all the people whose daughter it would be inadvisable to kidnap, Bryan Mills would be on that list. He'd be, like, number two, behind, I don't know, Ultron?

The entire Taken series was co-written and produced by Luc Besson, a man who has made a career by creating lonesome characters provoked into acts of extreme vengeance. In 1990 he delivered La Feme Nikita, about the titular felon-turned-assassin, and in 1994 it was The Professional, starring a teenage Natalie Portman as Mathilda, a girl who learns how to dispatch the men who killed her family by professional hitman Léon, played by Jean Reno. (The Professional also has one of the all-time great Crazy Gary Oldman Performances as the ultimate Bad Lieutenant.) As Mills in the original Taken, Liam Neeson’s turn as a retired spy with a “very particular set of skills” is widely credited with cementing the 6’4” Irishman as one of cinema’s most interesting (and bankable) action stars in the business.

In Taken 2 (2012), the boss of the human traffickers, a man by the name of Murad, is not pleased with Mills. He happens to be the father of the man who Mills barbecued with a live wire in the first film, so naturally, he wants revenge. If only Murad had seen the first film, he probably wouldn’t have plotted to kidnap Mills, his wife Lenore (Famke Janssen) and Kim in Turkey. This goes about as well as you’d expect.

So how would they up the ante for Taken 3? Neeson himself told a Dublin radio stage, 98fm, that there wouldn’t be a Taken 3 because “that’s just bad parenting.” But there is a Taken 3, and the premise is brutally simple; Mills’s wife Lenore is killed, and he’s framed for it. So instead of cruising and bruising his way through Paris or Instanbul on a solo manhunt for his beloved daughter or wife, now he’s on the run in L.A. with half the world looking for him.

Although the first Taken is often seen as the moment the world realized Neeson is a natural as the reluctant but brutally effective killer, it's not accurate. Neeson’s been kicking some serious ass on screen for a while now. Here's some proof, a brief tour of his skull busting, nose breaking ways:

Mel Gibson and Anthony Hopkins were the big draws, but it was Neeson as lower deck seaman Churchill that put the muscle into the mutiny in Bounty. When pretty, privileged Fletcher Christian (Gibson) gets all hot and bothered on Tahiti, and has the idea to overthrow the stern Captain Blight (Hopkins), he’ll need Neeson’s Churchill to make that happen. Look who’s holding Captain Bligh tight as they bring him up on deck, wrists bound:

Then he was scientist-turned-scarred-superhero in Sam Raimi’s Darkman, a man who tried to create a synthetic skin for burn patients but ends up one himself. In the process, he becomes a superhero, fighting bad guys who, because it’s 1990, laugh ridiculously when they do evil. Have a look:

Neeson was the legendary Scottish outlaw Rob Roy MacGregor in Rob Roy, swinging around a broadsword and making things miserable for the Englishmen, and in this scene a fellow Scotsman, who get in his way.

He brandished a different kind of blade a few years later as Jedi Master Qui-Gon Jin in Geoge Lucas’s first Star Wars prequel Episode 1: The Phantom Menace. After dropping the light saber, he picked up a sword (again), and a giant cross, which he used as a club, as “Priest” Vallon in Martin Scorsese’s Gangs of New York.

It’s the mixture of brawn, brains and gravitas that draws directors looking to film cerebral bad asses to Neeson, and perhaps nobody likes a complicated tough guy more than Christopher Nolan. Just take a look at Neeson as Ra’s al Ghul, beginning in Batman Begins and recurring in small moments in the following two films in the trilogy. He's a mixed martial arts master and, it turns out, a brooding psychopath looking to “cleanse” Gotham and restore the “balance of power” by destroying the city.

For my money, the most satisfying showcase of Neeson’s preternatural alpha maleness came in The Grey (2011). Neeson plays John Ottway, a member of an oil rig crew who are stranded in the Alaskan wilderness after a plane crash. Their main issue is a pack of freakishly bloodthirsty wolves, and their relative lack of weapons, food and health. The group isn’t short on tough guys, but who better than Neeson to star as the most ingenious and implacable among them, helping fashion improvised weapons and plotting tactics in an effort to survive. The film’s a blast, and the last few seconds alone are worth the price of admission.

There was also Neeson in Non-Stop, as air marshal Bill Marks, a man whose idea of mile-high club involves beating someone senseless in an airplane bathroom.

2014 was also the year Neeson took A Walk Among the Tombstones as former NYPD officer Matthew Scudder, haunted by his accidental shooting of a little girl and now reluctantly on new case, years later, as an unlicensed private eye.

At 62, who knows how much longer Neeson’s going to want to star as the embodiment of reluctant ass-handing, but along with his indelible performances in films like Schindler’s List and Kinsey (okay fine, mom, also Love, Actually) Neeson’s quietly put together one of the best action hero careers of all time.