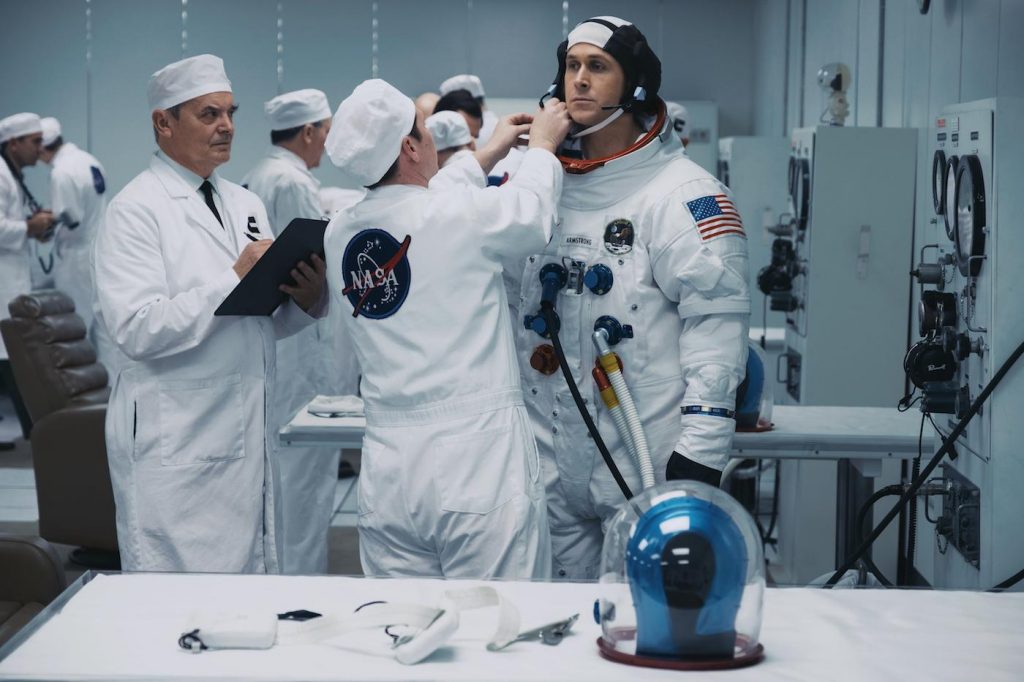 The moon landing was welcomed as a shared triumph in American history, but no one had more at stake than the men who traveled there. The mission’s success was as much a feat of will as of science. First Man captures the danger and courage of pioneering space travel in both broad historic and intensely microscopic ways. Editor Tom Cross was inspired by the movie’s ambition of telling a famous story from a human perspective.

“It allowed us to delve into this first-person subjective type of storytelling where you feel like you are climbing into the space capsule or you feel like it is your hands on the rung of the ladder as you climb down and step on the moon,” Cross described. “That’s something that [director] Damien [Chazelle] wanted to go for. Those two kinds of styles of documentary and first-person style blended together. In some ways, you wouldn’t think they would go together, but that was our big challenge was to find a way to balance those two things.”

Since the inception of motion pictures, artists have dreamt of launching beyond Earth’s atmosphere. A Trip to the Moon in 1902 was one of the first narrative films ever created. Despite more than a century of romanticizing space travel on screen, First Man charted new creative territory inspired by real footage of the events.

“[Damien] came upon all of this amazing NASA archival footage that was shot by the astronauts themselves,” Cross revealed. “It was 16mm and it was very close quarters. It was very claustrophobic in the space capsules. I think that is something that really struck him. The other aspect was he found that stuff very intimate and very personal. Those were qualities I think he was really inspired to go for.”

Neil Armstrong was hailed as a national hero following the successful landing, but First Man revealed the immense stress he was under. Both personally and professionally, Armstrong (Ryan Gosling) withstands great strain throughout the film and endures in the face of death. The film explores the mental and physical impacts of harrowing tests before the Apollo 11 ever launches.

“Cinematically, that was exciting for me as an editor. To try to create the subjective immersive experience that expresses how brutal space travel is,” Cross said. “Also, a big part of that is having to set the table cinematically, having to create suspense. That meant we would linger on shots of Neil Armstrong walking to the Gemini capsule. We would linger on POV shots of Neil climbing into the capsule and all the technicians going through the various checks and snapping in the buckles and the tubes into the spacesuits and then closing the doors. Those were the very subjective cinematic scenes that I think as an editor are very exciting to get.”

Back on Earth, Armstrong has a fearful family continuously aware that safety is not guaranteed. Watching the families of fallen astronauts mourn their loss, Neil and his wife, Janet (Claire Foy), are dealing with their own. After losing a toddler daughter, Karen (Lucy Stafford), to cancer, Janet is tense about the mounting danger of Neil’s job. Family scenes balance the isolation of their situation and the chaos of raising children with a raw realism. Cross says that spontaneity was achieved organically during rehearsals.

“[Damien] wanted [the actors] to get comfortable with each other, so he figured let’s do the rehearsals together, but he also thought we might be able to use that material,” Cross explained. “He was right. Some of the domestic scenes that you see in the movie are actually from these unscripted rehearsals. Going through that material itself almost was like going through documentary material. We took a lot of these great moments and we sculpted and created these little scenes that would often replace scripted family scenes. We did that because this documentary stuff just felt more unique and more authentic. I would say there was a lot more rewriting we did in the editing room. It was a lot more material to go through and the type of material it was, cinema verite shooting, it made it more challenging. It wasn’t always clear how we were going to use the footage or where it was going to go.”

Cross worked with Chazelle onWhiplash andLa La Land, but the style of First Man was a departure. Spontaneous details and character in the footage add atmosphere to the film. “Little camera imperfections and little focus racks and pans and zooms that would seem messy for La La Land all of a sudden felt appropriate for First Man. That was really fun to kind of recalibrate the way I would assess the film dailies.”

Storytelling can often glamorize the difficulty of reaching a historic moment. Hard work and sacrifice can be taken for granted when superheroes often seem ordained to reach victory. Cross’ work on First Man reorients our appreciation for a human leaving the ground and reaching another world.

“Our feeling was that, of course, the astronauts are American heroes, but I think it was important to show why we really think they’re heroic,” Cross explained. “Our hope was to show their experiences in a realistic fashion and show how dangerous they were and let the audience judge for themselves. Most of the time, what really comes across was how dangerous these missions were and how these ordinary men did these extraordinary things. That is what we were going for more than presenting them firsthand as heroes and human beings last. We wanted to do the opposite with this.”