Director Damien Chazelle and composer Justin Hurwitz met at Harvard playing in the same band. By sophomore year they were roommates, and soon enough the two were taking time off from school to create what they thought was just a student film, Guy and Madeline on a Park Bench. “The idea for the film was to do a sixteen millimeter black and white vérité style movie, but juxtaposed with this big, lush 90-piece orchestral romantic score,” Hurwitz says. “We’ve always been gigantic fans of The Umbrellas of Cherbourg-type scores [a 1964 French musical directed by Jacques Demy], those French new wave scores coming out of the 60s. We didn’t have the resources for that kind of visual feast on screen, so the idea was to take a vérité doc style aesthetic, but put it with his big romantic score. We expected the film to be kind of a senior thesis, but then it got into Tribeca in 2009 and had a nice festival run, then a small theatrical release. We’ve been working together ever since.”

Their next feature is the upcoming Whiplash, which has been wowing audiences since its first incarnation as a short. We saw it at the New York Film Festival last year and were blown away by the potency of the 18-minute version. Chazelle didn’t recruit Hurwitz for the short because the score was simply the title song, “Whiplash,” a standard by Hank Levy. “There was no original music in the short, but I always knew that Damien’s plan was to turn into a feature, and I knew I’d do the music for it. I thought the short was spectacular, it really showed Damien’s visual and editing language, it had everything that would go into the feature. Almost shot for shot it’s close to what the feature became.”

That feature version of Whiplash won both the Grand Jury Prize and Dramatic Audience Award at Sundance this year. The film follows Andrew Neiman (Miles Teller), a young jazz drummer striving to become a star in his elite east coast music conservatory. Andrew’s ambition is fueled both by his desire to become one of the greats and by his fear of becoming like his father, a failed writer (played by Paul Reiser). He believes he might have found the man who can help him become a giant – Terrence Fletcher (the incredible J.K. Simmons), an instructor known for his passion, knowledge and explosive methods. It’s the unstoppable force meeting the immovable object as the young aspirant runs headlong into the ruthless instructor.

“I went back and watched the short recently, and watching the same scenes in the feature I just saw how much tighter they became,” Hurwitz says. “The filmmaking took a step up, and all the credit goes to Damien. I think he managed to do everything better.” Hurwitz’s modesty aside, the composer is a major reason the feature-length Whiplash has astonished festival-goers and film reviewers alike — along with sweeping Sundance, it currently has 91% fresh rating on Rotten Tomatoes.

When Chazelle began prepping the feature, he brought Hurwitz in to start creating original music. Usually a composer is brought onboard in post-production, but the nature of their relationship is such that they begin collaborating almost immediately. “We started really, really early on thinking about what the theme of our music is going to be. We were talking about score a year before the movie was shot. What can it be? What can it feel like? By the time we’re doing the first cut, we already had a musical theme, so that was really helpful. The fact that the first cut had a little bit of my stuff in it and a little bit of thematic material in it helped guide the scoring process.”

Hurwitz’s process begins by schooling himself on the world of music Chazelle is drawing from. “Sometimes he wants me to write in a certain style, so he’ll send me a long list of reference’s to listen to — a bunch MP3s,” Hurwitz says. “I just sort of try to soak up the melodic and harmonic language of that world. So with 30s big band for example, there are certain things you would do and certain things you wouldn't.  If Damien wanted, say, Baroque music, there would be another set of rules. Most of the composing I do for Damien is my own style, but sometimes you're asked to drawn on a particular genre, and then you have to study up."

Then comes the extremely painstaking approval process, once Hurwitz starts composing some music and sending it to Chazelle. “I’ll send him lots of ideas, sometimes just ten seconds on the piano that I record myself playing. I’ll record into my computer and just send him an email, and he’ll typically say, ‘No, no, no, no, no,’ and then, finally, ‘Yes!’ Then we’ll start building it out.”

Hurwitz then starts composing, a process that mimics the previous step in getting the exacting director’s approval, only now with longer pieces to listen to. “He’ll say, ‘Okay, that’s a great A section, what will the B section be?’ So I’ll send a bunch of my ideas, and again, he’ll go, ‘No, no, no, no, no, okay yes!’ That’s how the composition takes shape.” You’d be excused for casting Hurwitz as the Andrew Neiman character, with Chazelle playing Fletcher, only without the acute psychological abuse. “The approval process can be ruthless, he’s very demanding with how much material he asks for at the beginning, but looking back I’m grateful when he’s that ruthless because I do my best work when he pushes me. I always look back and realize that thank god we didn’t use the first twenty-two things, because the twenty-third thing made the most sense.

Hurwitz plays the piano, yet his education was mostly classical without much of a jazz background. “It’s a huge regret looking back because it’s just such a different language, and it’s a little like spoken languages where the younger you are the easier and better you soak up the rules and syntax of all of it.” Yet Hurwitz has gotten an intensive jazz program working on Chazelle’s last two films. “Damien put me on a steady diet of jazz, both American and French music scores,” he says. “Basically I had an independent study with Damien the last couple of years of college. Now I use more jazz idioms today than I learned in musical theory class.”

Hurwitz said one of the things he’s most proud of is an overture which plays twice in the film, tentatively at first, much like Andrew is at the time, then boisterously and bombastically at the end. “Andrew is walking through New York in the second scene, and there’s an abridged movement that plays. Then at the end credits, the full four minute version of that song plays. I modeled it after the Buddy Rich big band style, it’s very, very fast, complicated and dense big band music, the band is just flying around playing, interweaving lines. I wrote an arranged it. From an arrangement standpoint it’s complicated because it’s also based on the theme of the movie. We had started talking very early about what that theme could be, and what’s important to Damien and me is that scores are thematically economical, they don’t keep throwing new melodies at you. You establish one or two melodies and use as them in as many ways as possible. So that overture that plays for a little bit at the beginning establishes a theme that we hear in many of the score cues. We hear tender versions of it, unsettling versions of it, then in the end, it’s this big, fast big band piece.” 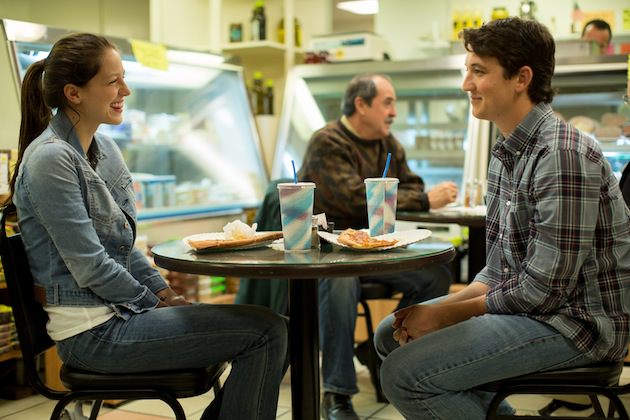 Hurwitz recalled another scene he liked a lot, one that explained his role on Whiplash almost perfectly. “There are a lot of big band songs throughout movie, some of it’s live and some are meant to stand in as standards. For example, there’s a song that plays when Miles and Nicole (Melissa Benoist) have a date in a pizza parlor. Our budget was too small for a standard there, so I had to fake one, which meant basically I had to write a tune that could sound like it was made in the 30s. At the pizza parlor Miles says, ‘This is Jackie hill, 1938.’ But there is no Jackie Hill.”

There is a Justin Hurwitz, however.