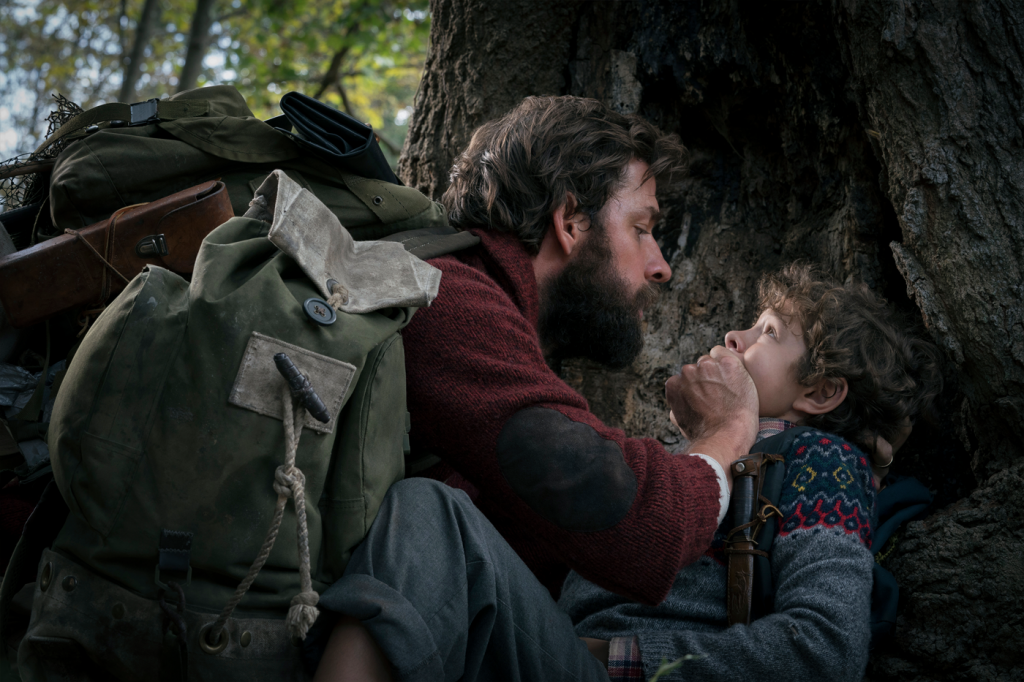 Supervising sound editors Erik Aadahl and Ethan Van Der Ryn had the unusual challenge of applying their expertise to a film that would be so quiet, it had the word in its title. John Krasinski’s thrilling, chilling A Quiet Place was predicated on a brilliant idea; alien monsters have turned the planet into one giant Amtrak quiet car. Only in this world, if you make a sound you’ll suffer a fate far worse than the annoyance of your fellow train passengers.

Of course, there is sound in A Quiet Place, and it always leads to trouble. We see the effects of what happens when you make a peep through the lens of a single family, the Abbots—pregnant mom Evelyn (a sensational Emily Blunt), Lee (Krasinski) and their two children, Regan (Millicent Simmonds) and Marcus (Noah Jupe). The film opens (extremely belated spoiler alert) with the third and youngest child, Beau (Cade Woodward) playing with a toy that ends up making some noise—and that’s all it takes—in an instant, one of the blind alien monsters with the exceptionally advanced hearing apparatus swoops in and kills the kid. Now that‘s how you open a monster movie.

Aadahl and Van Der Ryn spoke to us about the challenges of taking on a film built around a premise of “silence saves lives,” and how they used their years of experience to give audiences the delicious experience of being afraid of their own breath. They answered in tandem, befitting their close-knit working relationship.

You’re the sound duo for a film that’s now iconic for creating an environment in which no one can make a peep if they want to live. What was your reaction when you first heard the concept, and how excited were you to tackle this?

We were first contacted by producer Andrew Form, who told us “I know you hear this all the time, but this movie is all about sound.” Any skepticism we may have had vanished when we read the script. Sound was baked into the DNA of this story and script.

Soon after, we met with director John Krasinski and before we could say anything, John exclaimed: “this is a sound designer’s dream!” We knew then this would be an incredible collaboration.

We all know how well this movie worked—I’m wondering if you can share some ideas that were thrown around regarding the sound design that you didn’t end up using? Or, short of that, if you can share some of the aspects of the sound design that would surprise folks who might figure there wasn’t much for you two to do (any seasoned film lover would know your job was actually much, much more involved b/c of this concept).

Creating the sound for the film was a very experimental and explorative process. The alien creatures in the film are essentially blind, so it’s with their hyper-acute hearing that they navigate the world through sound. We thought of real-world analogs that use echolocation, like bats, dolphins and beluga whales. At first, we tried using our recordings of these animals for the creatures but soon felt they were too relatable and of this world. That was an experiment that didn’t work entirely.

We wanted to avoid existing animal sounds and for the aliens to be unrecognizable and terrifying, working on the reptilian part of the audience’s brain. That fact that these creatures have an electrical component, in that they can affect the daughter Regan’s cochlear implant and create interference, we decided to explore electricity sounds. Eventually we decided on using a stun gun, which we zapped into grapes (which simulate human skin). The zaps were then slowed down to create individual “echo-location” clicks for the creature’s sonar.

Can you reveal your personal favorite moments in the film in which the sound, or lack of it, really worked for you?

There’s a couple. One favorite scene always takes our breath away. It’s a scene where Regan, the deaf daughter played by Millicent Simmonds (who is deaf in real life) sits in her bedroom and tests a new cochlear implant hearing aid that her father made for her. Her old implant is on, and we hear her sonic point of view, which John Krasinki called her “sonic envelope”. It’s a low, internal hum and heart pulse. Many people may consider that sound “silent”. When she pulls the working implant out of her ear, all sound disappears completely. Now that is truly “silent”, digital zero which is something we’ve never done in a film before. She puts the new implant in, turns it on, and snaps her fingers. Compete silence. Millie’s performance, coupled with the sound design, is heartbreaking. The “sonic envelope” puts the audience right in her shoes, connected us with her vulnerability and making the film a truly interactive cinematic experience.

Another favorite scene is where Emily Blunt’s character Evelyn has to give birth while remaining quiet. While experiencing labor, she has to create sonic diversions, sound the silent alarm, and deliver her baby, all without screaming. That part of the movie is quite a nail biter!

How much of the sound was created by foley artists versus how much was created in post? Were there sounds caught during filming that were especially cool and useful to you?

Almost all of the sounds in the movie where created in post-production. Foley is a part of post-production and was a key part of our sound design. The foley we used included all the footsteps (on sand, in the cornfield, on wood floors, etc). The foley department also was critical for very intimate sounds like cloth movement and touch.

Michael Barosky was the on-set production mixer and recorded everything on set. One of his wild track recordings was the space shuttle sound that gets the family in trouble in the opening sequence. He also had the challenge of recording very delicate and quiet breaths and whispers, some of which we enhanced or re-recorded in post during ADR. Everything else was created by our sound effects team.

Were there any films you used as touchstones when you got to work crafting the soundscape to a film so obsessed with the littlest noise? Any sequences in horror or monster or thriller films in which the lack of sound, or, the oppressiveness of silence, inspired you?

Steven Spielberg’s masterpiece Jaws was a huge influence on us. Part of its power is what you don’t see. In A Quiet Place, it was the negative space in sound that helped give the scenes their power. We found that the more sound we stripped out, creatures vocals, etc, the more intense the existing sounds became.