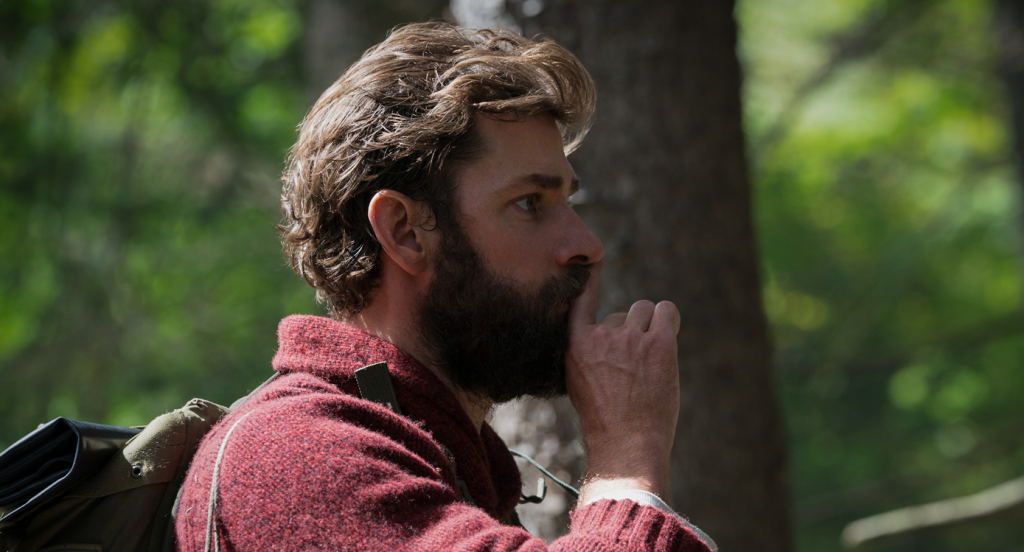 There are rules to the monster invasion in A Quiet Place and you must learn them quickly to survive. The movie’s characters have had over a year to observe the creatures, but the audience is gifted only a few precious minutes to learn before the first attack. The predators are blind, but they hear everything. Barefoot steps on a soft sand path is permissible. Screaming is not. Supervising sound editors Ethan Van der Ryn and Erik Aadahl, along with co-supervisor Brandon Jones, establish the rules of the film then create the terror that follows.

“Sound really is an incredible tool for directing attention for an audience,” Aadahl said. “We sometimes think of it in visual terms as rack focusing from one idea to another idea. On wide shots we didn’t want to play the footsteps at all. If you can hear that from a distance, they’d be dead. That’s the whole logic or conceit of the film. You only hear those delicate things when you’re in close-up.”

The critical nature of Van der Ryn and Aadahl’s work becomes immediately apparent. The characters are able to move freely, but quietly, through the world. Their main concern is avoiding all sound, although that’s nearly impossible. The sound design emphasizes the struggle to stay quiet and the looming threat beyond the four edges of the movie screen.

“Sound gives us a lot more ability to draw attention to things that may be on screen, or things that may not even be visualized,” Van der Ryn explained. “In many ways, the opportunities are endless. I think one of the most important things in what we do is deciding what not to play, which becomes more important than what we do play.”

The dynamic levels of A Quiet Place make the audience hyper aware of every noise. The performances by director John Krasinski, Emily Blunt, and the young cast are incredible. Sound, however, emerges as the movie’s main character.

“A little sound can become a big sound,” Aadahl said. “Just the fact that we have such a delicate low noise makes it so much more terrifying because audiences are not used to that experience. It’s completely novel. If we were talking 500 years ago, it wouldn’t be novel.”

Horror films date back to the silent era, when audiences could see, but not hear, the terror on screen. Frankenstein and Nosferatu both predated the talkies, but modern audiences aren’t accustomed to that experience. Then, there’s the additional layer of the consequence of making a sound equaling violent death.

“The audience is scared to put their hands into the popcorn,” Aadahl said. “What happens is that everyone starts holding their breath and leaning forward. The film is pulling the audience in and minute by minute, over the 90-minute stretch of the film, our goal was to pull everyone in so far that when the credits finally roll, you can catch your breath.”

Or finally let out that scream you had to suppress. Watching the movie in public, there’s an unspoken social contract that attendance is contingent on your observance of the rules.

“The function of the sound in this movie makes it very much an interactive experience,” Van der Ryn said. “More interactive than most cinema experiences. We use the sound to really pull the audience into this world. As an audience, we really feel like we’re experiencing what these characters are experiencing.”

What they’re experiencing is a post-apocalyptic world overrun by savage beasts who hunt sonically. Blunt’s character, likely a doctor, has medical knowledge, and Krasinski’s character is an engineer by trade or necessity. They have the skills to survive, if they can just stay quiet. Their bright, fearless, and strong-willed daughter, Regan (Millicent Simmonds), is deaf, which increases the stakes for her survival.

“There’s a few times in the movie where we use sound to experience the world the way she is experiencing it,” Van der Ryn said. “When she has the cochlear implant turned on, the way she experiences sound is basically this low hum. We based it on the idea of what it feels like and sounds like to be in an anechoic chamber. Because there’s no external noise, your hearing almost opens up to the point where you hear your own bodily functions. It feels like you’re hearing the fluid flowing through your own body, the blood, your heart beating.”

Regan’s hearing is central to the movie’s drama and develops complex relationships with her family, as well as the monsters. Thanks to her, the family is fluent in sign language, which probably helped save their lives up the point when the movie begins. However, it also makes it difficult for her to know when danger is approaching.

“It became important story wise to be able to make that point clear,” Van der Ryn said. “One of the ways we were able to make that clear was by going into her perspective sonically. Also going into the perspective of the monsters sonically so we can experience from both points of view what’s happening when her hearing aid starts interacting with the monster. When she actually turns the hearing aid off, these are the only times in the movie that we go to complete silence. That’s incredibly shocking because this is something that is never done in movies and, in fact, never done in normal life. There’s no time in life we experience zero sound.”

A masterful method of filmmaking is capitalizing on the terror of the unknown. Hearing a monster becomes much more frightening when you know safety is dependent on not hearing anything at all.

The monster reveal is truly alarming as it is a beast of a creature. They are terrifying in every way and prey on a natural occurrence in our world. Its auditory senses are as fearsome as it’s pincers.

“It creates this amazing, unique tension that sonically we could play with,” Aahdal said. “As a sound designer, this film allowed us to be puppet masters of emotion and telling that story in a very unique way.”

A Quiet Place is rife with emotional manipulation. A movie with nearly no dialogue calls for just that. The script contained only one scene of written dialogue. The sound designers had a more critical role in this film than any other they had worked on.

“For the most part, we got the ideas once we started working with the film and having discussions with John about how it was going to play out and what the story was,” Van der Ryn said. “A lot of the cues aren’t specifically in the script, but evolve out of the process of starting to sit down and work with sounds to picture and just starting to create that world.”

The idea was largely experimental, but the filmmakers quickly realized it could work. Using sound as a weapon proved to be a captivating premise that is chilling in execution.

“We knew though in the broadest strokes upon reading the script that it was going to be way harder than doing a movie with a ton of loud sound in it,” Aadahl said. “It’s so much more challenging doing delicate footsteps compacting sand, or footsteps on a creaky floorboard. Those delicate sound that the entire family is peppered with, upon reading the script we knew this was probably going to be one of the challenging films we’ve ever worked on.”

“When you’re watching a movie you’re using two senses: your sight and your hearing,” Aadahl said. “In a way, sound can be much more subconsciously manipulative and powerful. It can really affect your emotions in ways that the audience might not necessarily be aware of. Because of that, it’s so powerful for a horror film. It can create this manipulative experience using the invisible hand of sound.”