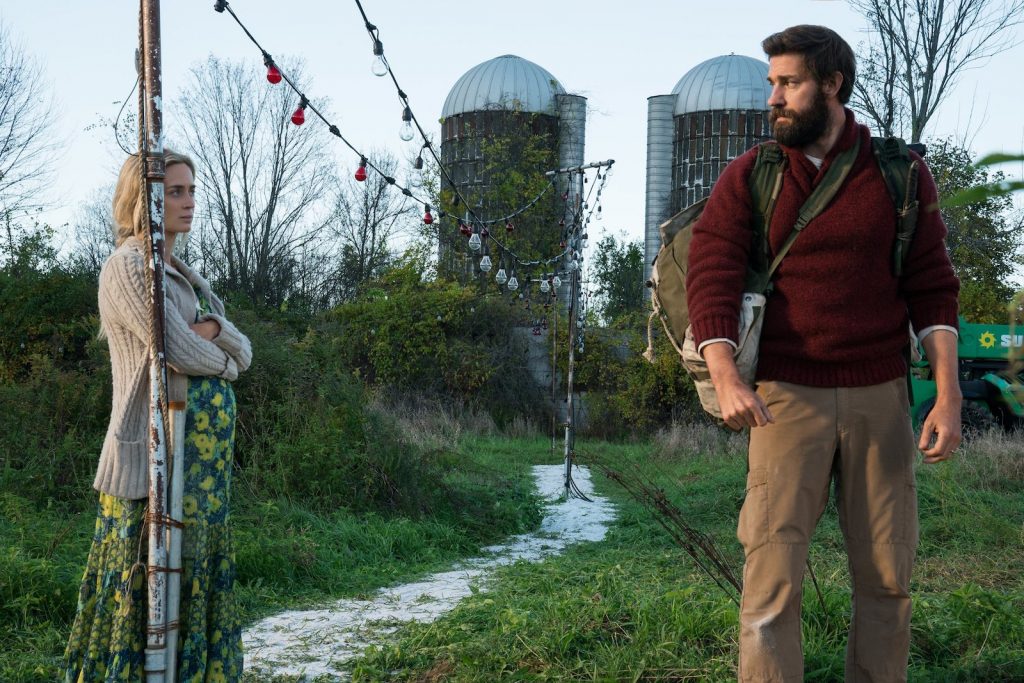 In a landscape dominated by whizz-bang actioners, A Quiet Place stands alone. Directed by John Krasinski and starring Emily Blunt, it’s a nearly dialogue-free, smartly subtle genre exercise that’s as much creature feature as it is a stirring family drama, a post-apocalyptic thriller centered on a family beset by malevolent monsters that use sound to track their prey. But in a landscape of utter quiet, it’s the film’s gorgeous look – executed by cinematographer Charlotte Bruus Christensen – that ultimately fills out the lush world in which the monster movie peril plays out.

“The sound design is very important and very significant,” Christensen tells The Credits. “We needed to create images where there could be sound design. We kind of understood that when you’re up close, everything has a sound. There’s clothes, footsteps, movement. So we decided we had to have a range of not just wide lens close-ups, but to physically have the camera up close to a character or an object to capture those little sounds.” It’s an approach that builds a spellbinding sense of intimacy and dread, as Christensen places the camera to catch loving glances between a mother and son before closing in on the muffled crunch of bare feet against sand.

Still, getting the camera so close to the action wasn’t so easy. “In terms of the location, there were quite a few challenges,” Christensen says of the sprawling upstate New York farm, complete with a silo that provided the stage for one of the film’s most nerve-wracking set pieces. “The silo was actually 60-feet high. Some scenes John wanted to be on the actual silo. So we rigged two cameras on lifts, on either side and shot that practically.”

It’s a beautiful shot in a uniquely gorgeous film, a post-apocalyptic thriller that’s refreshingly flush with color and life, a direct contradiction to the tanned and dusty cliches of the genre. “John and I agreed that this is a warm movie,” Christensen says. “The film is taking place in late summer, and we had all these golden fields and gold from the sun and grass. Every light was to add warmth, so what was white was actually warm.” To add depth, that warmth is punctuated with impactful touches of vibrant color: a young girls’ yellow sweater, a mother’s green dress, or the soft gleam of a red light bulb.

“Red is a significant color because that’s the warning light, and when [Emily Blunt] turns on that light it has to stand out,” Christensen explains. “So we didn’t use red too much more than other things. We tried to hold back on the red so it really had an effect when you get to that part of the movie. We were very aware that it has to be a wide range of colors, it’s not a blue movie or just an orange movie. We wanted it to be colorful.”

Though easily categorized as a horror/thriller, A Quiet Place is the rare genre film that’s not shot like a genre film at all, and Christensen’s cinematography feels as at home in the film’s dread-inducing world as it would in the art house. “For the look of the movie, we were talking about There Will Be Blood And also No Country For Old Men,” Christensen says, film references that served as both tonal and visual influences for the project. “There’s a lot of dusk scenes in those movies and dusk was a really important element in our movie too, a lot of silhouettes and dusk scenes and simplicity in the lighting for those two movies.”

Adding to the film’s richness is Christensen’s ultimate choice to capture A Quiet Place on 35mm, a daring choice for such a VFX-heavy horror project, but one that makes a world of difference. “Immediately when you think heavy VFX work and creatures and a lot of night, everybody thinks that digital would be the right method,” Christensen tells The Credits. “And it might very well be, digital would have done a very good job. But it’s different, and that’s the thing. The warmth that we spoke about, the softness, the truth, the reference movies we spoke about, No Country for Old Men, There Will Be Blood, they were all shot on film. John wanted a confident looking movie. You think about There Will Be Blood, it’s not taking over with too much fancy lighting. It’s just solid, good work.”

A Quiet Place is hardly the first time Christensen has worked with the medium. She opted to capture both the stunning Fences and The Girl on the Train (the movie that brought her to Emily Blunt and ultimately, this very project) on film as well. “From a lighting perspective, the simplicity of shooting 35mm is you have your light meter, and you look on the set, you sit by the camera and it’s very analogue and I like that,” Christensen explains. “You can create a simple, strong image. Having seen the movie, we’re very happy that we ended on film.”

Of course, what ultimately separates A Quiet Place from its non-horror visual inspirations is the presence of the creature, a blind reptilian beast complete with Alien-esque rows of teeth and nightmare-inducing appendages. “That was the first time I worked on a creature movie with such heavy VFX,” Christensen admits. “And also John hadn’t done a creature movie before, so we were all out there looking for advice. We had the most amazing VFX supervisor, Scott Farrar from ILM, who took us through bit by bit and any question we had, it was just easy for him to guide us through and made it all so simple.”

Simplicity, of course, doesn’t always mean proficiency, and Christensen confesses to a bit of a learning curve in avoiding the studied approach of her prior work. “One thing that he really taught me, is when you do a shot that the creature is supposed to be in, sometimes you have a guy in a tracking suit, but sometimes you do shots where there’s nobody in the shot. And then I had to move the camera imagining that the creature would rise up, and I was so subtle with it because I thought it would look a little fake if I did anything [too big]. But he was like, ‘Just tilt up and pan this, and pan right!’ I come from the Ingmar Bergman study of the close-up, where you’re taught to not move the camera. So it was an amazing experience.”