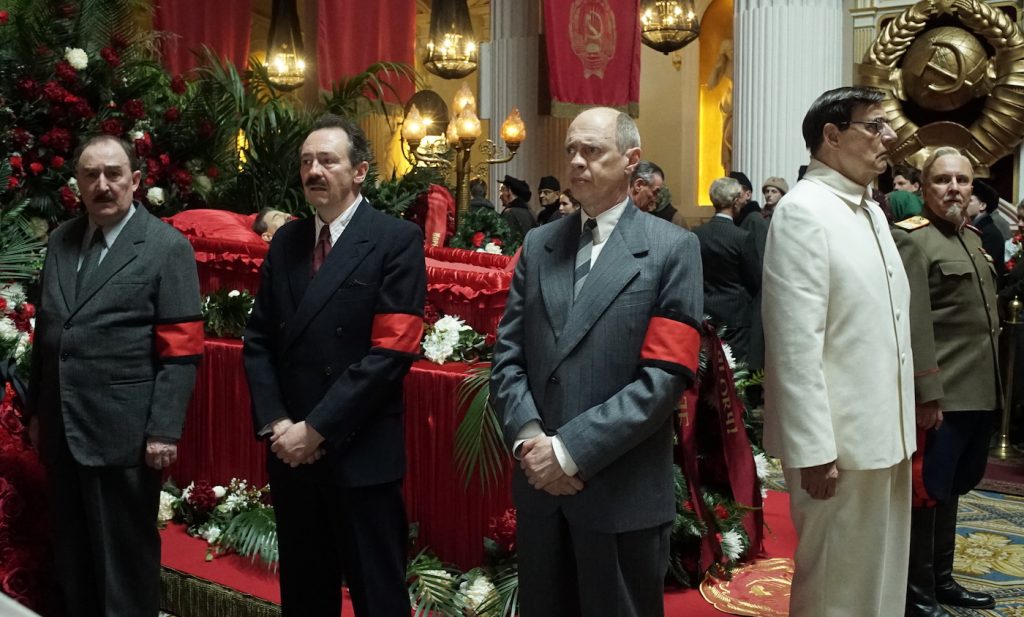 When we interviewed composer Christopher Willis about writing the now Oscar short-listed score for Armando Iannucci‘s hilarious, bleakly resonant dark comedy The Death of Stalin, he told us that one of his major influences in the film was the legendary Russian composer Dimitri Shostakovich. “Because he was famous, he had a complicated relationship with Stalin, he was in and out of favor. There were times he thought he’d written a piece that had offended the authorities, and he had his bags packed because he thought he was going off to the gulags. There are two levels to researching that stuff because it informed what I was going to do musically, as I learned about the history.”

In The Death of Stalin, everyone who surrounds the titular, terrifying ruler is on perpetual tenterhooks, never sure when the aging, volatile madman is going to put their name on his dreaded list. The final years of Stalin’s rule were a living nightmare for Russians, with the great terror tearing families apart as Stalin’s agents, working on orders fueled by his paranoia, destroyed countless lives.

It’s rich, dark territory to explore, and Willis makes the most of it. He said this to us last March: “There are millions of people outside the rooms where these men are making these decisions whose lives are being greatly affected. In a modern film, music like this can feel slightly preposterous, but this is not your average historical movie. We worked a lot of the start on that nervous tempo, a certain pulse running through the film that seems to say, ‘Oh shit.’”

In an exclusive video interview shared with The Credits, Willis discusses his working relationship with the brilliant Iannucci (their collaboration began on Iannucci’s hilarious HBO series Veep), and how they began discussing The Death of Stalin, which started as a conversation about classical music.

“I think in this kind of comedy, my job isn’t to create a light-hearted mood but paradoxically to create something very hard-edged, a kind of rigid surface for the comedy to bounce off. And I found on Stalin that the more deeply and authentically my score drew on the serious orchestral music of the period—Soviet music from the 1950s—the harder that edge became and the more I seemed to be helping the comedy. It’s been exciting to be involved in a film that has important things to say to us about our own politics in the present day. There’s an energy and urgency in the film, both on the screen and I hope in the music, animated by real anxiety about what can happen when the institutions of liberal democracy fall apart.”

Willis is currently scoring Iannucci’s next film, The Personal History of David Copperfield.

Christopher Willis is a composer working in film and television. His score for Armando Iannucci’s political satire The Death of Stalin recently made the Oscar shortlist for Best Original Score, and it also won the International Film Music Critics Association’s award for Best Original Score for a Comedy Film, took top honors at the International Sound and Film Music Festival, and was nominated at the British Independent Film Awards and Hollywood Music in Media Awards.