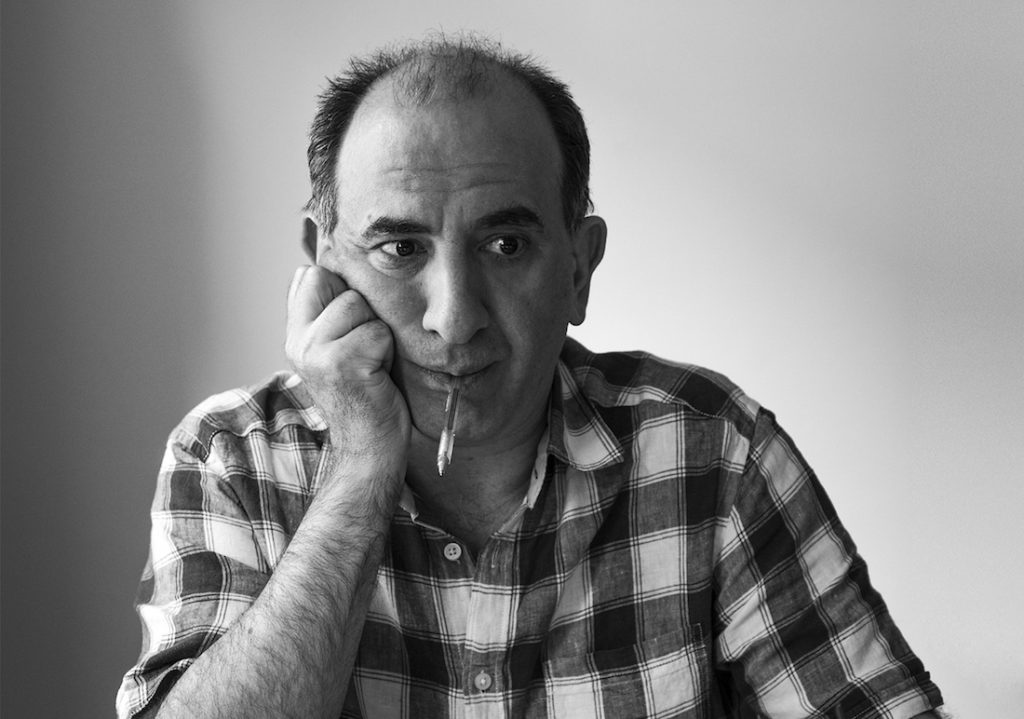 For some, politics is a horrific affair, but that’s not the case with writer/director Armando Iannucci. Throughout his illustrious career, Iannucci has found humor and humanity in the political world.

The auteur created the hit HBO comedy Veep, which has been making viewers cringe, laugh and marvel (it has somehow anticipated, with bracing, unfortunate clarity, our current bonkers political moment) since 2012. Before that, he produced the 2005 British television comedy The Thick of It, and directed 18 of the program’s 24 episodes (in addition to serving as one of the show’s lead writers). His 2009 political comedy In the Loop even earned him and his fellow screenwriters an Oscar nomination for best adapted screenplay.

Much of Iannucci’s work has derived from fictional stories, but his latest comedy The Death of Stalin has its’ basis in reality.

Adapted from a graphic novel, the feature focuses on the events in Russia following Joseph Stalin’s demise. After the dictator passed, there was confusion and mayhem in the top levels of the government. That left Stalin’s top lieutenants scrambling for power and skirting responsibility for Stalin’s tyrannical reign.

With an all-star comedy cast featuring Steve Buscemi, Michael Palin and Jeffrey Tambor, the new film finds humor in this dark, dramatic world as it shows bumbling wannabe leaders fighting amongst each other for control of the country.

Surprisingly, much of the film is based on real-life events. Members of the current Russian government were so offended by its contents that the comedy was banned in that country.

I recently had the opportunity to chat with Iannucci about finding the humor in politics, how important cast selection is and Russia’s official reaction to his provocative feature. Below is a slightly edited transcript of our conversation.

How did you originally come across the graphic novel?

I was sent it. It’s a French graphic novel and a French production company [named] Quad owned the rights to it, and they got in touch with me and said, “We want to make this as a movie and would you be interested?” Strangely I had been looking at dictators anyway, because I was thinking about doing something about a fictional dictator —a contemporary thing — and this arrived and I thought, “Well, it’s about Stalin and it piqued my interest so let’s read it,” and I was just completely caught by it because that opening at the concert [that has to be replayed in front of a packed concert hall because Stalin wanted a tape of the performance] and then Stalin collapsing and him being left alone because the guards were too scared. All these stories are true by the way. They all happened, and it was that blend of funny in a crazy kind of way [and] horrifying [that interested me]. The paranoia. Frightening. The madness about it all. Just instantly, I thought, “Well these are the things I was looking at anyway and it’s true.” As soon as I finished reading it, I was on the phone to them saying, “Yep. Absolutely. Let’s do it.”

Was there any hesitation because Stalin was a real person and there were so many victims of his reign?

No, no hesitation whatsoever. Instantly, I knew what I wanted to do with it and how to go about it. It’s the truth of it that actually appealed to me. The fact that this happened and it was this crazy. So if anything, that’s what drew me to it.

Also, there’s an element of I wanted to get out of my comfort zone and having done The Thick of it and then Veep, I’d done 10 years of politics [about] people who are fundamentally good people but just compromised and just try not to make mistakes, and I thought I’ve kind of done that. With this, this is about something else. This is about really deep kind of scenes of survival and murder and politics and state control. It’s [about] larger themes really.

How much did you rely on historical accuracy?

I thought the rule was to sort of try and find out as much of what really happened as possible and then work off that. Work from that, into our own way of telling it. It’s all our dialogue, and we’ve taken and reduced the timeline and so on, but I thought as much as possible, lets try to root it in incidents that happened because that way you can do both the tragedy and the comedy. They shouldn’t feel like they’re coming from separate worlds. They both come from these true events. That’s one way you can get that unity of tone.

How on set did you balance the absurdity of the situations with the seriousness of purpose?

Well two things. One, we did a rehearsal period and very quickly, we knew that the comedy has to be played straight. That you don’t play it for laughs. You actually play it for reality because the comedy will arise out of the circumstances, but the other thing I said to the crew before we started was, “We have to be very respectful of what happened to the people of the Soviet Union at the time,” so we don’t play that for laughs. We treat it absolutely as it happened. We don’t try to dilute it. Don’t try to hide it. It’s almost like the comedy takes place indoors, inside the Kremlin, and the reality takes place outdoors.

Did the script change during production?

I like to cast people fairly early, so we’re writing for them. We know who’s going to play the part so we can actually write with their voice in mind. And then, as I say, we got the rehearsals going and in the rehearsals, we do a little bit of improvising and trying things out and coming up with more funny stuff and we see that in the script, so the script changes right up to the day of filming. Then on the day itself, we shoot what’s on the page. There’s time at the end of the day to try some new ideas out as well, and quite a few of them make it into the film. I might just — while filming — think of a line and just say it to them and they say it back as we shoot it. There’s always room to keep looking for more.

You spoke about casting the actors early to write in their voice. When you are casting, do you simply have a rough draft of the script?

There was a rough draft of the script [but] there’s no explaining what happens next in terms of how we go about rehearsing and developing it, but I try and get the script. There’s occasions where we need to know what’s happening. Costumes need to know what’s happening, so we do come up with a working script. If all else fails, we’ll shoot this but I know I’m going to be working furiously beyond that…

Were you surprised to the movie’s reaction in Russia?

Well, it’s strange. I was saddened by it but actually the reaction in Russia widely was very different. The press saw it and loved it. We did previews. Audiences were standing and applauding. I did a day of press and that was all good. Russians who have seen the film have said how accurate it is. They say it’s funny but it’s true and true, not in a kind of, “Everything in it actually happened in real life” because it’s our dialogue and we changed the timeline, but true in terms of the atmosphere. What it must have been like to live in that kind of climate of fear. It’s surprising that someone in the ministry of culture there panicked and withdrew the license. In this day and age, you can’t really ban a film. People are going to see it anyway. They’re going to find it, so I don’t quite know what they were trying to achieve there.

A lot of people find the current state of politics very frustrating and disappointing. How do you find comedy in something so many people find so aggravating?

I think it’s just one way of trying to interpret what’s going on. One of many ways but at the moment, things are so crazy and so nonsensical that I think comedy seems like the perfect spirit for that. How else can you possibly make sense of what’s happening?