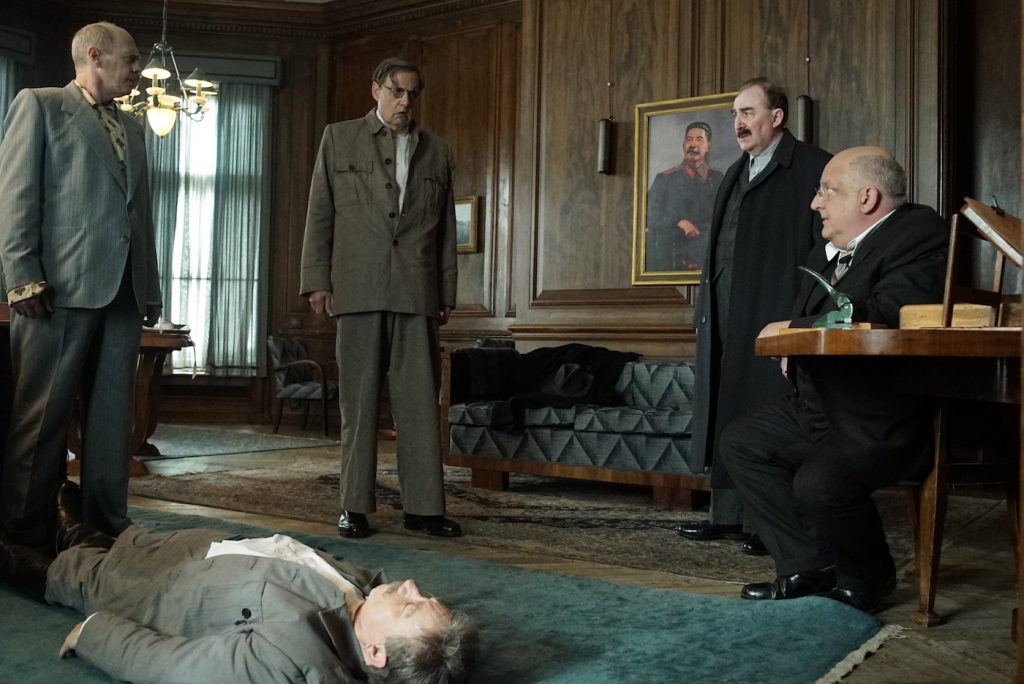 Armando Iannucci said that he wanted to take a break from the insanity of American politics after creating the critically acclaimed, depressingly believable satire Veep on HBO. After five years of looking at the inanities and insanities of Selina Meyer (Julia Louis-Dreyfus)’s rise, fall, rise and fall in Washington D.C., Iannucci needed a palate cleanser—so he turned his attention to the very end Stalin’s ruthless, murderous grip on the Soviet Union with The Death of Stalin.

The brilliant writer/director made the decision to cast mostly British and American actors in the roles of top Soviet officials, from Stalin himself (the British Adrian McLoughlin) to the crafty Nikita Khrushchev (the American Steve Buscemi), to the terrifying NKVD leader Lavrenti Beria (the British Simon Russell Beale) to the whiney Georgey Malenkov (the American Jeffrey Tambor). The film, which I caught at Sundance and has since been released by IFC Films, is hysterical. It follows the Soviet dictator’s final days, and introduces us to the bloody struggle that followed his death between the likes of Beria, Khrushchev and others for control of the vast empire. It’s fearlessly dark and relentlessly funny. It is also a joy to listen to, not only for the surprising pleasure of hearing stellar British and American performers play historically significant Soviet leaders without taking on a phony Russian accent, but also the fantastic score that bolsters, accentuates and improves the film’s best scenes.

You can thank composer Chris Willis for the film’s glorious music, which would be lush and gorgeous if listened to on its own, but which, when paired to the insanity on screen, becomes one of the film’s most potent laugh generators. Having worked with Iannucci on Vevep, Willis was more than prepared to tackle the film’s fearless humor head on. We spoke to him about turning one of the most gruesome periods in the 20th century into a dizzying dark comedy.

So how do you approach scoring a film that is this genuinely, brilliantly bonkers?

Working with Armando for a few years gave us a bit of a shared langue. We’d already established in Veep that the music can create a tempo against which the comedy works, although the comedy doesn’t rely on the music. A lot of the early conversations we had were about the score, as Armando is very knowledgeable about classical music. We talked about the Russian music from the 20th century that we liked.

Who were the classical composers you first discussed?

Classical music was hugely important to Russians in the 50s, as it still is now. Some of the big composers were huge celebrities. The most obvious one is Shostakovich, who had a very interesting relationship with Stalin, and there’s a movie to be made there about his terrifying ordeals. Then there was Mieczysław Weinberg, a lesser known talent. I wanted the film to sound like it was actually written in the 1950s. The music of that period is enormous and huge, and it can do the job of reminding you how much is at stake.

The film doesn’t shy away from the horror of the Stalin years.

Exactly. There are millions of people outside the rooms where these men are making these decisions whose lives are being greatly affected. In a modern film, music like this can feel slightly preposterous, but this is not your average historical movie. We worked a lot of the start on that nervous tempo, a certain pulse running through the film that seems to say, ‘Oh shit.’

One of the greatest bits in a film filled with them is the way the characters are introduced, in slow-motion, with your bombastic score behind it. How did you come up with that?

The sequence of those introductions, with the music doing its serious thing, there’s just something very Russian about it. Leading to halfway through the film, when we finally meet Zhukov (Jason Isaacs), it’s really funny because you’d think the slow-motion intros would be over by then, but then suddenly there’s another introduction a hour into the film.

Do you approach scoring differently when working with Armando on his caustic, bitterly hilarious comedies?

I often tell myself that the comedy doesn’t need me. The film was funny when I got it. When I first got a cut, it was very dry, and it was already funny. I didn’t need to make it funny with funny music. I did feel each time I really committed to a scene, that I could make the sense of scale and the tragedy more expansive, because there’s only so much you can see. The other strange challenge about this film is that I rehearsed and practiced the Russian style for many moths to sound as period as I possibly could. I think if I’ve done my job correctly if it sort of sounds like we’ve just grabbed Russian classical music and put it in the film. In fact that’s very rare. You can’t actually grab classical music and stick it in a film, because what a score is doing is much more specific than that. I’m trying to say very specific things that would be impossible to convey with a clip from some classical piece.

Give us a bit of a breakdown of how you looked at scoring the overall film.

At the start of film, things are very organized, as the great terror has been going on for a very long time. The first cue is a fugue, and then at the end, when all hell is breaking loose, the music has become very feral, very simple, very violent and unpredictable. So there are things I can do as the story unfolded to add layers of meaning, and this would have been impossible had we simply mined Shostakovich.

I noticed a lot of times the music simply stops, which is another tool in the composer’s toolkit, silence. How did you deploy this method?

Often there are moments where the music stops as soon as something really ridiculous happens. Sometimes I was thinking of it being almost like musical method acting, where you just get into character, forget that its a comedy, forget that its 2018, and you just compose a tragedy and let a lot of those other considerations take care of themselves. Some of the performances are like that, too. The panic and seriousness on Steve Buscemi’s face is far from comic, he’s doing an extraordinary job of allowing us to laugh at the situation, but he’s not mugging or inviting us to laugh.

I feel like it’s interesting, the response now in the U.S. is slightly more sober than the response was in Toronto last autumn, because the relevance just feels stronger and stronger as the months go by. Whether you’re on the right or left, it’s clear that we’re in a very factional time. Washington is full of in fighting, and this film shows you how bad it can get.

You used a full orchestra for the score?

We did get a huge orchestra for the project. I was researching the music of that period and noticing how huge the orchestras were, and although it’s a comedy, we had this unusual spectacle of using this massive orchestra—it was a session orchestra in Belgium. They were superb. Another odd thing musically, one of the most pleasing things came together very late, and that was the chance to write a piece for the end credits. Armando and I had talked about ending with this this quote unquote happy music, but when they tried to write happy music in the 50s in the Soviet Union, it came out manic and terrifying. We realized I could go for it at the end. Graphically they came up with the idea of having the photos scratched out with the tempo of the music, and I’m so pleased that came together. If you’re still sitting there thinking of the film, you’re able to think about the craziness of the time period.  Call it “The Comedy of Terrors.”