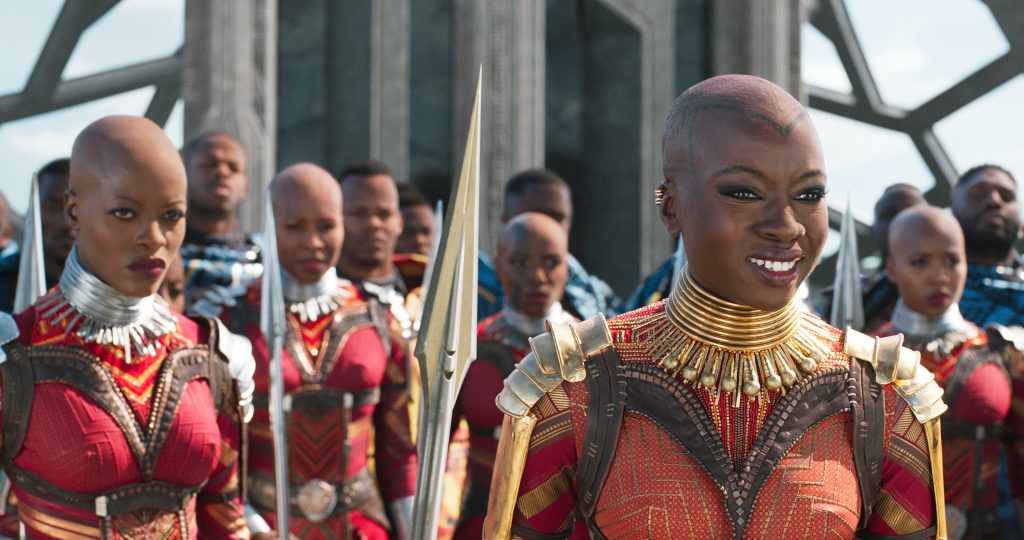 A rich African inspired heritage and fierce women warriors proved this year that fresh perspectives are long overdue on screen. Black Panther came out swinging and took a major swipe at barriers to cinematic representation. The immensely talented team dreamed up a world that was not only thrilling and gorgeous but also put new faces at the forefront of the superhero genre. Not only were there more black actors on screen than any other Marvel film, but many of the combat roles were portrayed by women. Powerful performances by Lupita Nyong’o, Letitia Wright, Danai Gurira and others were protected by a visionary guardian offscreen.

“My focus often was on the women of the film,” editor Debbie Berman said. “They were my goddesses. I would not let a frame go by in that film without making sure they were represented as strongly and powerfully as possible.”

That was not a passive mission. Berman says she had incredible footage to work with, but one particular scene struck her as inauthentic. During the film’s main battle sequence, the all-female Dora Milaje are surrounded by enemy forces until they are saved by a rival tribe, the Jabari.

“Originally the Jabari warriors were all men,” Berman explained. “I thought it really undercut so much of the work we put in building up the female characters throughout the film. They were so spectacular and so kick ass that to have the men save them at the end of the film wasn’t really the best way for that to happen.”

Rather than simply work with what she had been given, Berman spoke up. Shooting for the scene was finished, but she approached director Ryan Coogler with her concern. Agreeing the scene undid the message of the rest of the film, Coogler suggested the Jabari warriors should include both men and women.

“We had already shot this massive action scene with them all being men, but we both thought it was important enough to fight for and they ended up creating Jabari female warriors,” Berman said. “It became this whole new thing. We went and shot some footage and the very first Jabari warrior to break through the forcefield is this powerful, phenomenal female warrior. It is one of my favorite moments in the film. It meant a lot to people to see that.”

The final battle was far from the only fight sequence in the film. Black Panther was very action heavy and had multiple scenes where teams were fighting as an ensemble. There was memorable choreography, like Okoye (Gurira) ending a car chase with a spear, that needed to be protected. However, the fighting also had to serve the larger story arc which would not benefit from the audience being confused.

Black Panther also revealed the utopian nation of Wakanda for the first time and it was truly luxurious. Despite the temptation to spend hours touring the marvelous scenery, Berman had to be judicious in orienting audiences with the new setting.

“It was a huge challenge,” she admitted. “Initially there was a whole opening to that scene before T’Challa even arrived at Warrior Falls and it was a constant balancing act of how do we feel these moments without being indulgent. If you become indulgent, you lose the narrative and the core of the film. It’s experimenting and feeling it out emotionally. I always let emotion drive how long I want to stay in any moment in any scene.”

Part of the Marvel franchise success may be attributed to being open to creative input. Berman described the environment as being very collaborative and receptive to storytellers from all departments of a project. “People think that editors are just reacting to what footage exists and what is amazing about working on a film with a big budget like this, if you can dream it and it makes the movie better, they will support you and you will get it.”

With Spider-Man: Homecoming and Black Panther under her belt, Berman turned to Captain Marvel. Having proven she is a fierce advocate for women’s roles, she is a perfect fit for the first female-led Marvel project.

“I was very specifically drawn to both of those projects and it is kind of incredible to me that I got to work on both of them,” Berman said. “I spoke about them from the moment they came into existence. I really felt that I was personally drawn to them, but they were also important to audiences. I’m from South Africa so Black Panther has meant the world to me to think of my countrymen from back home seeing a film like this. It just gave me chills to think this film was going to exist. I just wanted to be a part of it.”

The hours were long and the pressure was high on the groundbreaking projects, but Berman recalled a rewarding moment where the impact of the films struck her on set. Black Panther may be fantasy, but its influence is real.

“I remember there was this moment where Ryan [Coogler], [cinematographer] Rachel Morrison and I were discussing this shot,” Berman recalled. “I’ve got this snapshot in time where I realize there’s this African American director and on one side of him was a female director of photography and on his other side a female editor and we’re making this $200 million film together and I don’t think that has ever happened before. It was really a magical moment. It was one of the reasons that I think this film has been so special. Voices that aren’t usually heard were given a chance to speak.”