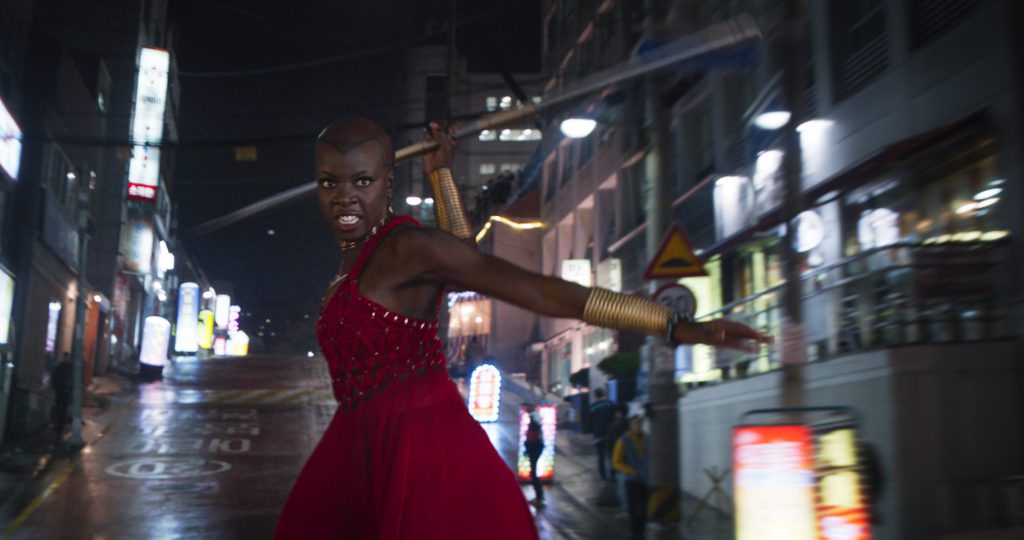 Okoye for Queen of Wakanda! Danai Gurira brought a brand new Black Panther clip to Jimmy Kimmel Live! and we are in awe. Silly Klaw (Andy Serkis) tries to attack Okoye and Nakia with mere bullets, but he is no match for their technology and super warrior skills. It only takes one shot for Okoye to totally wreck their car, and she does it in the most epic way possible. These ladies prove there is not a weak link in the entire nation of Wakanda.

T’Challa (Chadwick Boseman) may be king of Wakanda, and Black Panther, but he has some amazing backup. The title and responsibility of being Black Panther can transfer, as T’Challa picked up the torch from his father. In fact, Erik Killmonger (Michael B. Jordan) appears to be vying for the role in the film. Shuri has briefly taken up the mantle in the comics. Could there one day be a female Black Panther? This clip makes us think so.

Okoye is the leader of the all -female army, Dora Milaje. To be in top form for battle, the warrior women keep their head shaved. Gurira, who rocks very long locks on The Walking Dead, talked about the perks and drawbacks of shaving her head for the role. Gurira said it was a shock and took some adjusting, but she looks so awesome. She said it was great for bonding with her castmates and she now has an incredible Wakanda inspired design on the side of her head.

Gurira also opens up about being keeping the secrets of her insanely popular projects. Appearing in both The Walking Dead and Black Panther, Gurira says she’s, “very artful at saying nothing for hours.” We’re glad that she was cleared to share the amazing clip with us and we cannot wait to see more Okoye in the movie.