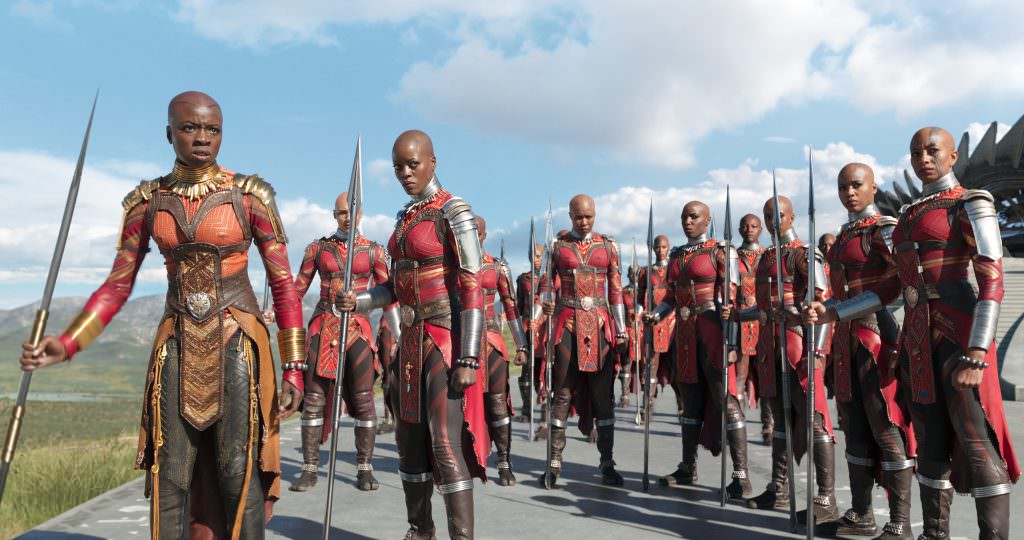 Bald, beautiful, and ferocious, Black Panther‘s elite, all-female fighting force the Dora Milaje are quickly becoming some of the most iconic characters in Marvel history. Lead by Lupita Nyong’o’s Nakia, Danai Gurira’s Okoyoe, and Florence Kasumba’s Ayo, the Dora Milaje are the protectors of the titular Black Panther, T’Challa (Chadwick Boseman), whose ascendence to the Wakandan throne is the central storyline in Black Panther. Survival won’t be easy (Michael B. Jordan’s Erik Killmonger wants the throne and the technology that comes with it), and T’Challa won’t last long without the Dora, and the Dora wouldn’t look nearly as glorious, and game for a fight, without costume designer Ruth E. Carter.

Building the fictional African nation of Wakanda and its proud inhabitants at the heart of Ryan Coogler’s Black Panther required both imagination and a deep respect for real African history and culture. Among Coogler’s many brilliant collaborators, from that sensational cast to cinematographer Rachel Morrison, were two people absolutely crucial to giving the film its soon-to-be iconic look; production designer Hannah Beachler and the two time Oscar-nominee Carter. The mandate for these filmmakers on Black Panther sounds almost like a diplomatic mission—help build a nation.

“I had to tread the waters very carefully in the beginning, thinking about how to create this world of Wakanda responsibly,” Carter told us. “In some senses you can say Wakanda is fictitious, yet even within that, people want this place to feel real.”

The Dora Milaje (which translates to “The Adored Ones”) are central to Wakanda’s history and culture. After T’Challa’s father is killed in a mass assassination that took place during the events of Captain America: Civil War, he takes up both the throne and the Panther suit. The Dora are there not only as his protectors, but as representatives of their specific tribes. Selected from all over Wakanda in order to give every tribe a seat near the nation’s power center, these warriors required a major deep dive on Carter’s part to make sure their individual personalities were as baked into their look as their unified mission to keep T’Challa safe. Carter’s research on their behalf meant not only immersing herself in the kaleidoscopic cultures present on the African continent, but sent her searching into the warrior customs of nations far afield.

“I looked at all kinds of armor, from indigenous African tribal armor to Japanese armor,” Carter says. “One of the most important things for me was to make sure their armor pieces look handcrafted, something from African tribes. Handcrafted elements looks a lot stronger and more personal.”

One of the brilliant ideas Carter mined from Japanese armor tradition was that of singularity. Each warrior wears bespoke armor, made just for him. The Dora, although a cohesive fighting unit that battles in perfect synchronicity, are outfitted in ways that reflect their unique characters—each piece is made just for her.

“I wanted to build this very hand tooled costume, with the idea that, like the way Japanese armor was made, someone [in Wakanda] was in charge of making the armor for this one person. Their armor is special to them.”

As the Dora are selected from all over Wakanda, they bring their specific cultures, customs and personalities to bear on their roles.

“It wasn’t like a sci-fi film where we were traveling to the moon,” Carter says. “Wakanda is rooted in Africa, and because the nation was never colonized, we imagined a world and how it would look if it remained unconquered. My first step was very similar to my approach to Malcolm X, Amistad and Marshall; to do the history, research, and gather the images from the different tribes, indigenous people, to look at Afro futurism, Afro punk, and to bring all of that together and use it for inspiration,” Carter says. “Then I divided up all this research into the various Wakanda districts.”

Carter plunged into African textiles, patterns and design to further wed the Dora’s look to the continent’s vibrant cultures.

“I had done the Roots reboot like a year before I started on Black Panther, and we had gone to South Africa and had these leather elements done by their traditional craftspeople,” she says. “They made hand tooled leather with beads and amber, and I took these leather straps to the craftsperson who was making the strapping on the Dora and said, ‘The leather on the Dora needs to look like this.’”

One central element to the Dora’s costume is the tabard, which is the striking, bespoke piece that runs down the very center of their bodies. The tabards are not only bespoke, but function as a layer of protection for the wearer.

“I thought if they’re going to wear something down the front of their costume, it should signify something significant,” Carter says. “The bead work across Africa, including within the Maasai tribe and their colors, with the Ethiopian Suri tribes, they all have this beautiful beadwork, so I thought we should bead the front of the Dora’s tabards, in the African tradition, and we’ll put some little areas of protection for each character.”

Carter imagined that the Dora’s tabards were not just were not just steeped in Wakanda’s tribal culture, but also had a hereditary element.

“I just wanted the Dora’s tabards to have the spirit of real armor that if I was a Dora, and training my daughter to be a Dora, I could pass down my harness and tabard to my daughter to protect her.”

Creating clothes for characters who need to not only look like they belong to their specific tribe and culture, but also who  need to fight, requires the ingenuity of not only a costume designer but an engineer.

“There were elements that were there for function, like the two way stretch of the leotard, and elements that were there for the culture, like the pattern work that evokes the sacred geometry of the line work that you see across the continent, and I infused all of that together,” she says. “That was when I was satisfied with the Dora. It took a while to get there. We had such great crafts people, but you have to communicate to them a whole host of ideas and thoughts, and remind them that this isn’t The Lion King, it’s Wakanda. It’s a real place.”