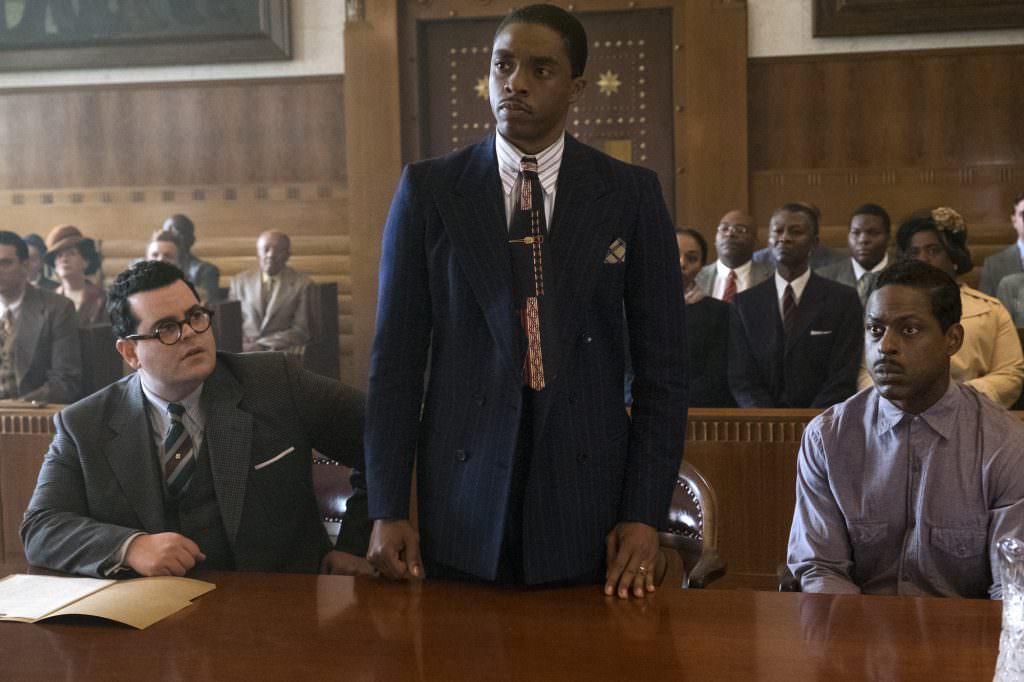 Ruth E. Carter’s designs have recreated some of the most powerful, tragic, triumphant, and moving stories in American history. She has already had a momentous career designing the costumes for the 2016 television remake of Roots, Denzel Washington’s stunning turn as Malcolm X, and the transcendent Martin Luther King Jr. biopic, Selma. Carter’s work is a master class in meticulous research meeting visionary creativity and it’s most recently displayed in new release, Marshall. Chadwick Boseman stars as the late Supreme Court Justice in the 1940s court case that launched the groundbreaking attorney’s career. Among a racially tense atmosphere, Marshall won the case without being allowed to speak in court. Carter and Boseman reunited for the highly anticipated Marvel’s Black Panther that premieres next year.

Carter shared with us her methods for designing period pieces, the fascinating research she uncovered, a glimpse into designing for Black Panther, and more.

The costumes you designed are so beautiful and reflect the period, but feel contemporary and relevant. How did you go about researching for Marshall? Were there many resources to reference?

Oh my goodness, I found some of the most amazing collections. They have this series of movies called Black Cat films and a lot of it was done in the ‘30s and ‘40s. They were independent films that were produced by African Americans and cast majority African American. You can watch these films and really get a sense of how people were and how they dressed and little nuances. That was really fun. Then I found a collection by two brothers who were photographers in the 1940s. They were African American and they shot all different kinds of pictures of people around Harlem. They would take group shots of organizations like the NAACP or Delta Sigma Theta or sororities and fraternities that have been established forever. It was the most gratifying research project.

What did you learn about Justice Marshall and others from that time period that comes across in the costumes?

Because of Thurgood Marshall’s influence on our history, it was important to me to get as many images of him I could find. I wanted to see what these dignified gentlemen of the onset of the NAACP looked like. On other projects in my career, I have interviewed detectives or people who are community leaders and they always say it’s better if they dress nice when they knock on someone’s door to talk to them. People respect you a little more. They are more open to trust you. I often look at these men who were the founders of the NAACP and they were always well dressed. These guys were walking into courthouses, standing in their offices when they were photographed, shaking hands with someone at a gathering. So, I think the image of a leader like Martin Luther King, Malcolm X, Thurgood Marshall is represented by his mode of dress. In this period of Marshall’s life in the early 1940s, he was put together: double breasted suit, carnation in his lapel, sometimes he had a pocket square and a pin, a three piece suit, always a clean shirt. This is someone who travels throughout the south as he fought the civil rights. I’m sure there were sweaty days and there were groggy days, but the producers as we talked about these images we found of Thurgood we thought represents him the way we see him in these images as ‘dapper dan.’ 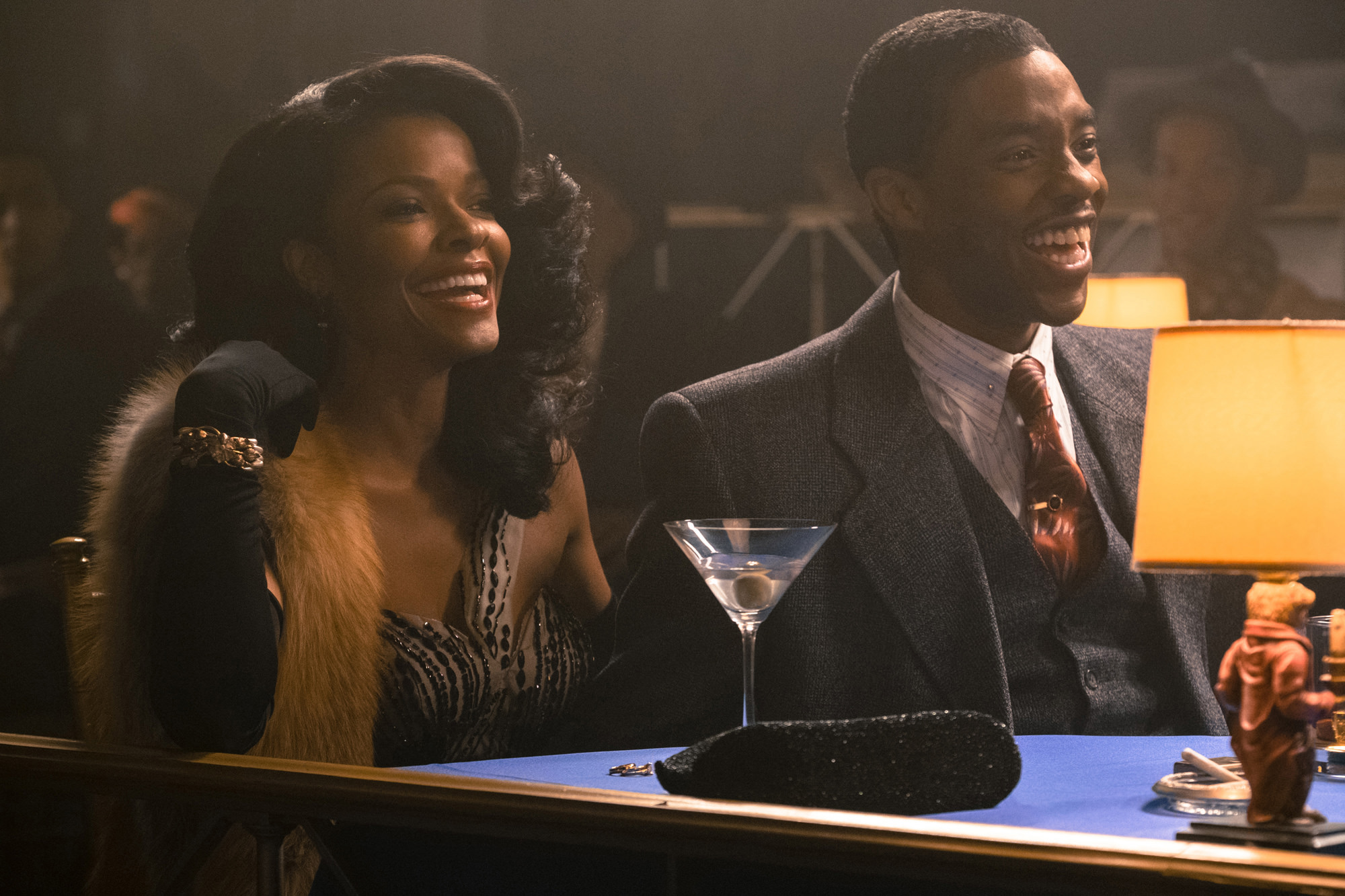 Once you had the style in mind, did you have to build the outfits?

I wanted to find authentic 40s clothing so that I would have the textures and the tones and the colors of the period. Sometimes that’s the hardest thing to gather because we live in 2017 and our colors have changed. Our way of dying fabric has changed. I found the most amazing collector in Albany, NY. It was like I was at the Marshall Field’s or the Neiman Marcus of the 1940s. If you want it to be your project and your aesthetic, you have to search for these collectors, these gems.

Did you have an idea of what was there, or did you just search the racks?

It was winter and it was a little bit cold and these warehouses are usually not as well insulated. There are a couple of rooms that are heated and that is where you set up your notebooks or your research. As you go floor to floor pulling your costumes, it’s cold. I spent a good amount of time there with the owner and she was amazingly versed in the period because that was her specialty. We pulled the palette and we pulled the costumes. After a while you get really, really good at knowing what’s early 40s and later 40s. 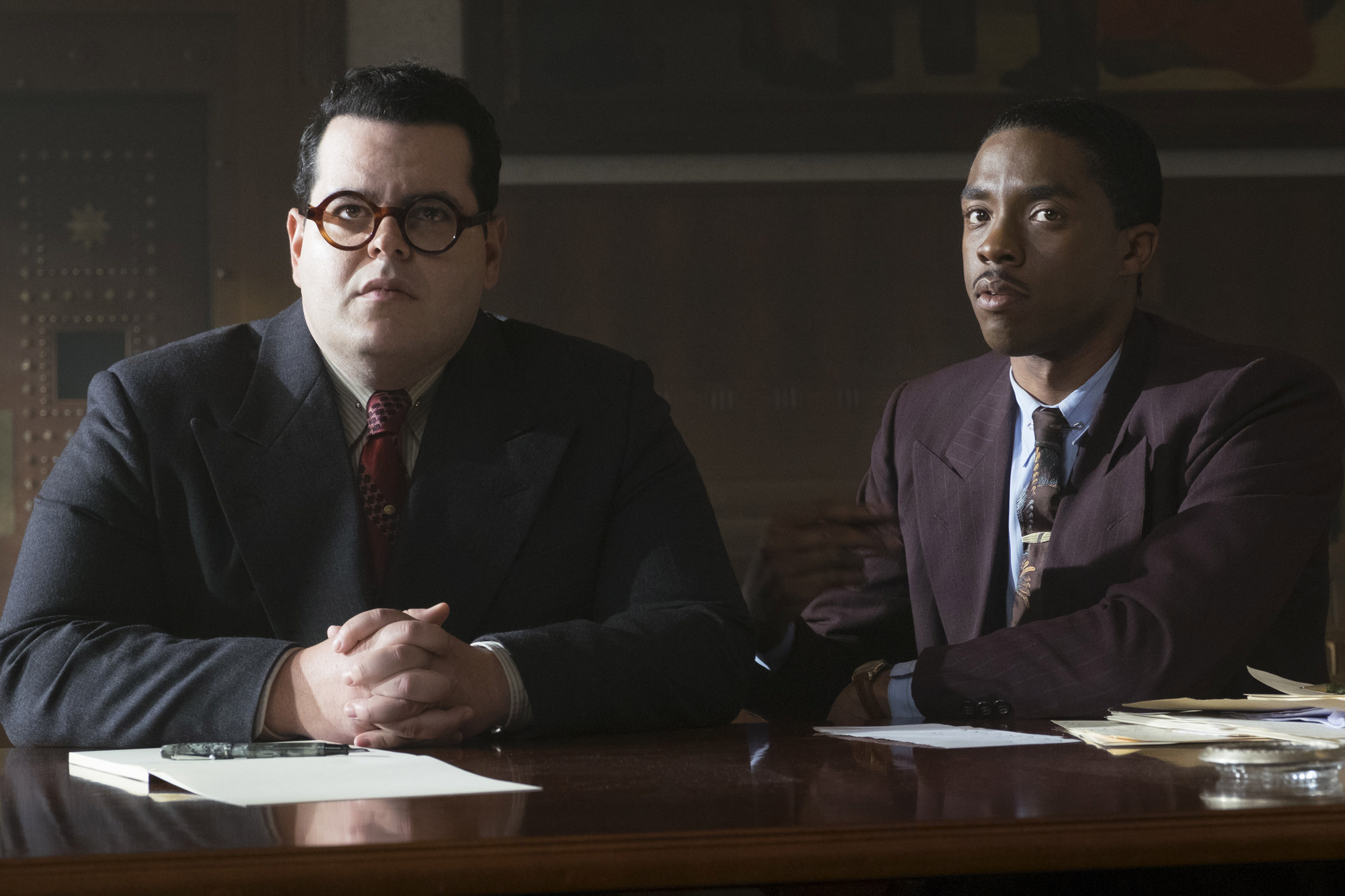 Are you able to artistically decide what works for each character, or are you limited by what clothing fits an actor?

I have so many ideas about the nuances of character. We have a guy that plays James Baldwin in the film. I was able to look at James Baldwin and see how he styles himself and get the real pieces. Not just make-up the stuff. I gave him real pieces from the period. He got real shirts, real scarfs, real pins and styled in the same way. That’s really gratifying. There’s another source here in Los Angeles and she has the premium collection. I struck a deal with her for Kate Hudson. I had Kate Hudson sitting in her studio and we were trying on designer originals, some of them unworn from the 1940’s.

Marshall really explores the racial and economic divide of the period. Was that apparent in Kate Hudson’s costumes?

For sure. Her character is from Greenwich, CT. In the 1940s, it was as rich as it is today. It’s also just a 30-minute drive from the Bronx and Harlem, New York. It’s a coastal community right on the water and so we wanted to dress her as a socialite. She was married to a rich man, had an upstanding image in the community. It’s a true story. She had an affair with a black man and she’s a socialite who panics and makes up a lie. The story has been told so many times. This particular story is the case that Thurgood Marshall won in court without saying a word, which is completely amazing. He wasn’t allowed to speak in court. He had to write notes to the Jewish attorney who was representing the case. Her character had to be something that stood out as the epitome of class, social status, and privilege so that we get it when we see the flashbacks and the truth of her life is revealed. We see the cloak that she’s under. 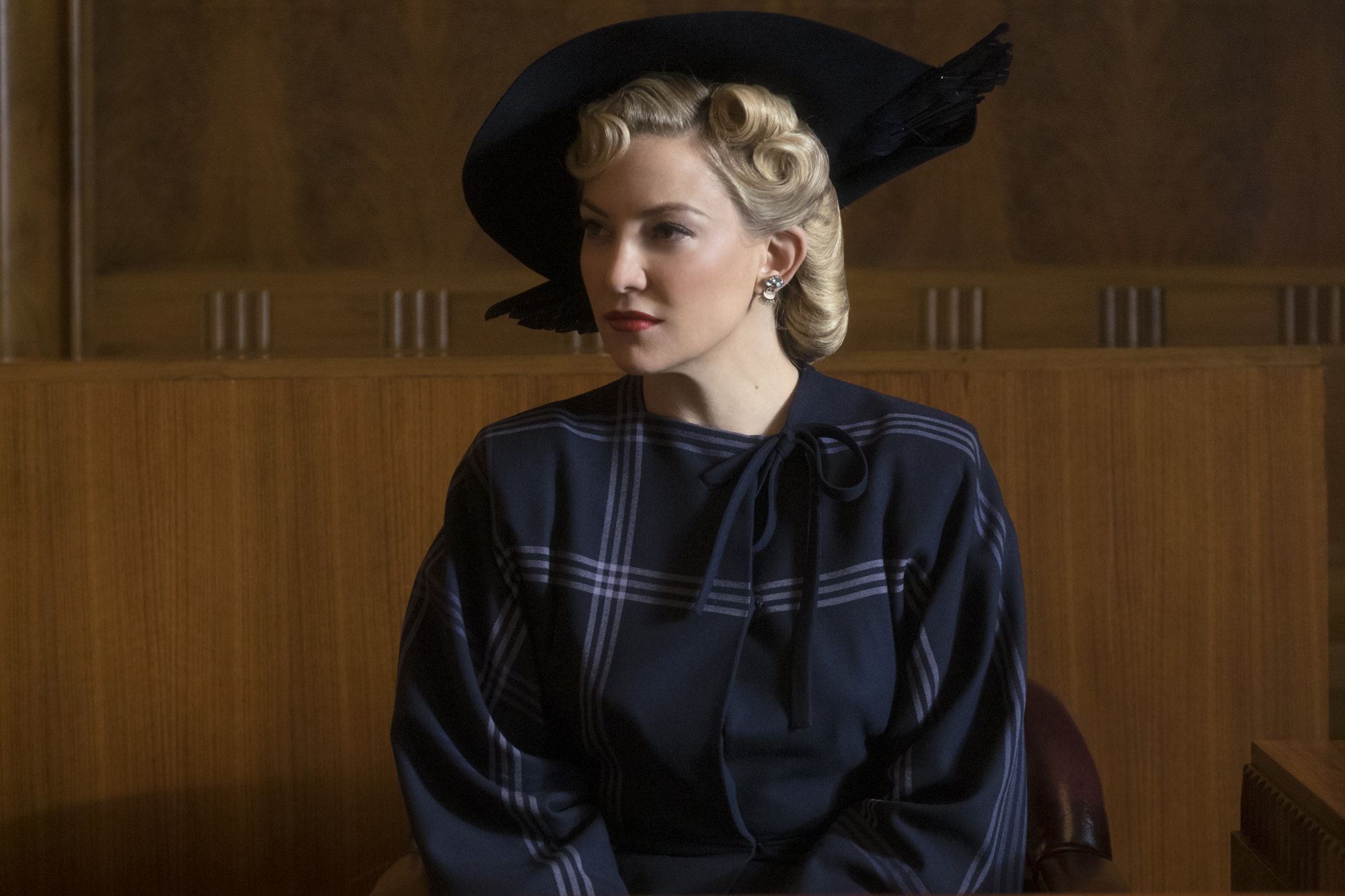 I’ve had a chance to speak to other artists working on Black Panther and they rave about your designs. What was it like working on that film?

The experience was a culmination of everything that I have done and you can translate that into a futuristic mode. How do you take black history or African diaspora, the African tribal history and make it real and move it forward? I brought all kinds of research with me from things that were not necessarily sci-fi. When the trailer came out, I was like a lot of people who watch it over and over again. I was so busy. Every second there was something to prepare for. You don’t always get to work on a Marvel film. Not everybody gets one of those. Some people go their whole career and never do one, but it doesn’t mean they didn’t have a successful career. It’s just that Marvel, especially right now, is a benchmark for what’s really appealing to a mass audience. The resources that you have as a designer that aren’t on your typical film. So, in that way it’s an opportunity to really reach out and do some creative work. 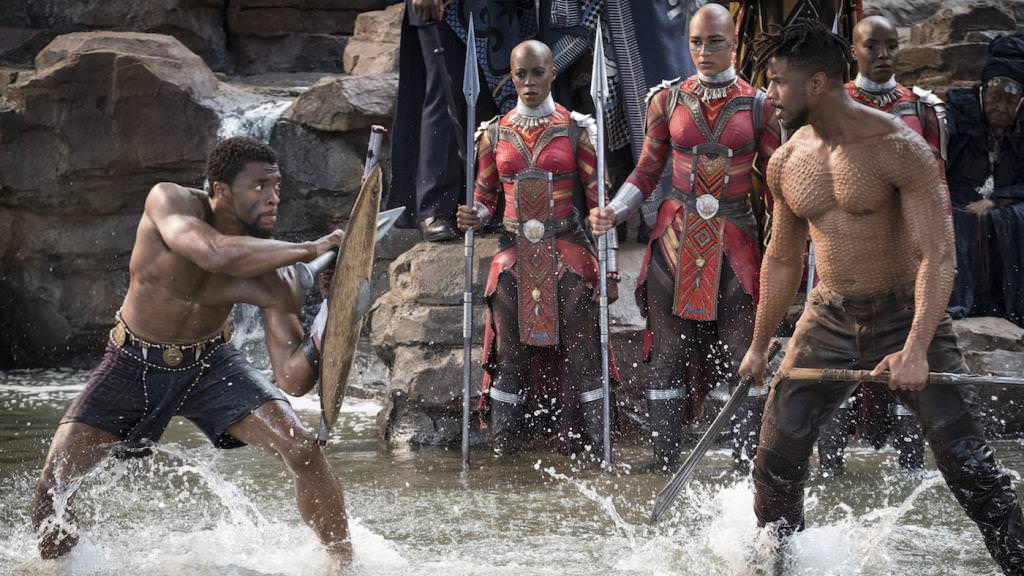