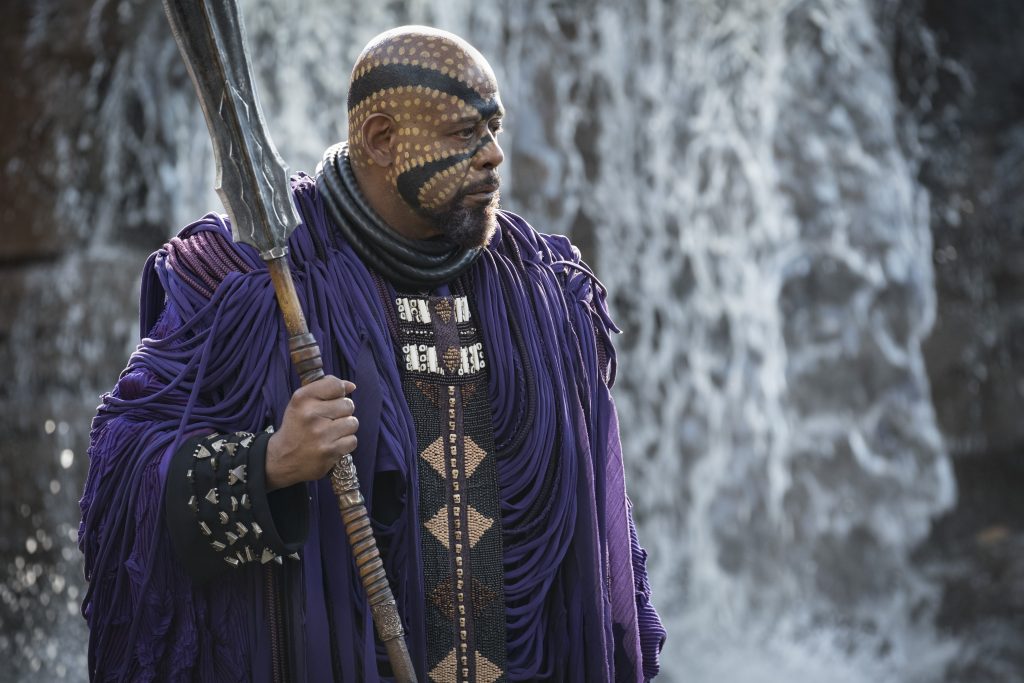 The Amazing & Unconventional Creations of the Black Panther Makeup Designer

If Wakanda were a real place, its tourism would be booming right now. Black Panther is a visual feast that celebrates the best of Africa in bold and colorful ways through a fantasy utopia. Visiting the theater is the closest fans can come to seeing Wakanda up close, and they were rewarded with well researched and stunning designs. The makeup design, production design, and costume design were so enveloping that people were actually searching for flights to Wakanda. The world co-writer and director Ryan Coogler created with his incredible team has resulted in a historic film: Black Panther cracked the top ten highest-grossing films in history. Makeup designer and department head Joel Harlow said there was a ‘wealth of research’ invested in the film that gave the story credibility.

“We went off as the make-up department and researched various African tribes to draw upon to create our five tribes in Wakanda,” Harlow explained. “That’s certainly the groundwork of a film like this is being true to the heritage of these actual tribes. Even though we’re creating fictional tribes, you can’t stray too far. Otherwise it becomes disrespectful.”

Harlow has a history of working on enormous films with a high volume of makeup designs. Specializing in special effects makeup, Harlow led the makeup team for Logan and the creation of 56 new aliens for Star Trek. For Black Panther, his inventive techniques were applied to large pieces, including Erik Killmonger’s (Michael B. Jordan) full body scars. The process was exhaustive and delicate, but absolutely worth it. The moment when Killmonger reveals them in full is arresting.

“That started with a body cast and we drew out the pattern, all those hash marks, on this body cast,” Harlow recalled. “Once we had everything plotted out, we took sheets of saran wrap and laid them over the top of the body cast then traced those little hash marks onto the saran wrap.”

Once the scar marks had been designed, Harlow and his team grouped them into sections of the body. The designs for the upper pectoral, middle abdomen, triceps, biceps, and so forth were transferred to a flat board. Each small section contained around 100 hash marks.

“From that we sculpted them raised out of chavant clay,” Harlow explained. “We molded them in a clear silicone. When that was dry, we removed the clay from the silicone, so now we’ve got a flat silicone piece with a hundred negative hash marks in it. And into that we put a thickened glue substance. Once that was dry, it was ready to go.”

That process was repeated each day, then the glue pieces were applied to Jordan’s body. The clear sheet would be pressed onto the actor’s skin, then the silicone sheet would be peeled away leaving the raised marks. Then, the appliques had to be blended and painted to match Jordan’s skin tone.

“All-in you’re talking about four guys at 3am applying 78-80 different sheets of a hundred hash marks each,” Harlow said. “Once that was done, I went in with individual cuts and slashes to bring the whole thing together.”

The method Harlow and his team created gave the character the look that was needed, referring to Killmonger’s life in the military, and as a mercenary, before he makes it to Wakanda to stake his claim to T’Challa (Chadwick Boseman)’s throne. It told a spectacular story and immediately gave us information about this character’s life and mindset. However, thousands of tiny glue pieces were difficult to maintain during filming. Killmonger is a highly active character engaged in fight sequences, particularly in the famous water challenge with T’Challa. Continuity was a critical concern.

“Water is the enemy of prosthetics, and when you’re splashing around in it, not just getting wet, but also engaged in a combat sequence where you’ve got rubbing and scraping and falling and flipping and kicking and punching,” Harlow said. “You are going to lose prosthetics through the day, but that’s the job. Between shots, you go in and you make sure that you’re 100% for that shot. If you can do that throughout the day, just focus on what you’re seeing on camera, then you’ll be successful.”

The ritual combat scenes in the water are some of the film’s most thrilling. They have highly focused action in an intimate environment where we got to see all five tribes of Wakanda come together to share in ritual of ascension (to the throne) by combat. There they wear traditional dress, including the lip plate of the river tribe. The real world tradition of the Mursi requires removing the four bottom teeth and resting the plate on the lower jaw. Dental surgery was not an option for the actors, so Harlow and his team tackled the challenge of inventing a method for replicating the look.

“We have to somehow lock that plate into our performer’s mouth,” Harlow explained. “We basically do a sculpture of that lower set of teeth minus those four front teeth. From there we have a little wire coming out with a magnet on the end of it. That magnet is what holds the actual lip plate in place. And then over the top of that, we glue a prosthetic around the outside of the lip plate blending off onto the actors’ mouth.”

Much like the challenge of keeping Killmonger’s scar marks in place during water sequences, moisture was a persistent threat to the lip plate design. Saliva threatened the prosthetic, and the team had to be diligent about keeping the lip plates in place. Harlow and his team had to design the actual plates as well to work in tandem with the lip prosthetic and ensure they looked convincing.

“That plate can’t be too heavy,” Harlow said. “The aesthetic of where the lip leaves the face and wraps around the plate has to be perfect. If there’s a little wave in it at all, it’s not going to look like it’s under tension. If that prosthetic is glued even just a little bit off, it’s going to ring phony.”

That level of authenticity and detail was maintained across the film’s characters. T’Challa, Killmonger, and M’Baku (Winston Duke) had some of the most intimate fight scenes of the film, but the women of Black Panther handled most of the movie’s combat. General Okoye (Danai Gurira) led Wakanda’s all-female fighting force who had serious skills and always looked flawless. Each member of the army had a personalized head tattoo, designed by Ken Diaz and Kentaro Yano, that Harlow told us had special meaning.

“The idea behind the Dora Milaje is there’s a ranking order to them,” Harlow explained. “Okoye is the general, so her tattoo denotes that rank in both the aesthetic and the sheer size of the tattoo. The idea behind it is it’s supposed to look somewhat aggressive, like a fighter pilot helmet, but the designs within that exterior stencil are obviously very influenced by African design.”

Each of the Dora received a head tattoo. Early in the design phase, the tattoos were very similar with small details indicating their militaristic rank. Harlow explained that after camera tests, they had to be redesigned as fine detail wasn’t visible onscreen. Once the design was finalized, it had to be reapplied to each actor every day of filming.

“Danai’s tattoo is obviously the most time consuming because you’re dealing with the compound curves of the human head,” Harlow said. “It’s not a traditional, one plane tattoo where you can just apply it in a traditional method, it’s almost like a transfer. Her tattoo was several different techniques. It was a stencil and then a cleaning up of that stencil and then multiple transfers within that stencil to get the detail. All of that had to be applied every day, and of course you had to keep re-shaving her head every day, because even the slightest bit of hair growth is going to disrupt the look of the tattoo. You can’t apply it over hair.”

In addition to the intricate face, head, and body makeup designs, Harlow and his team were also tasked with sculpting other important pieces in the film. During the combat challenge to become King of Wakanda and the Black Panther, the fighters wear intimidating carved masks. T’Challa wore a panther mask, M’Baku a gorilla, and Killmonger the jackal he stole from a museum of African artifacts. The makeup department was responsible for their creation. In addition to being visually striking, they had to be functional for the actors.

“You’ve got Chad and Winston fighting as T’Challa and M’Baku in water on a multilevel set,” Harlow said. “They’re having their vision somewhat restricted because the mask does protrude away from the face. It eliminates some of that peripheral vision. You want to try to make it as easy for them to perform in it as possible, but still keep the aesthetic of what it’s supposed to be.”

The makeup department also designed the neck piece of Shuri’s (Letitia Wright) warrior outfit near the climax of the film. For her to be comfortable in a fight, the piece had to flex with her neck, so it was made as a prosthetic. They also designed Klaw’s (Andy Serkis) prosthetic arm. Of course, the blasters were created in visual effects, but the arm itself was made in Harlow’s department.

“We had Andy’s arm scanned and then we took that scan and we reproduced it in something solid,” Harlow said. “We sanded it down in areas so that it would fit tighter and then we sculpted that sleeve basically over the top of his arm. Every day that he was working when he had that arm on, we’d slip that glove on and he could perform as if it were his own.”

Creating pieces that might be traditionally thought of as the prop or costume department is where Harlow thrives. He has a special skill for designing unique pieces with his own methods that make the movie experience truly magical.

“That’s the part I really like, the crossover. There’s so many things in every movie that aren’t really specific to a certain department. In our production meetings when we come to a place in the script where there’s a question, we all discuss which department is able to take that on and sometimes it falls under our watch. The same materials, the same techniques we use to create our make-up, can be applied towards so many other things: props, wardrobe, things like that. The techniques and tools and material can be applied towards a great many arenas.”