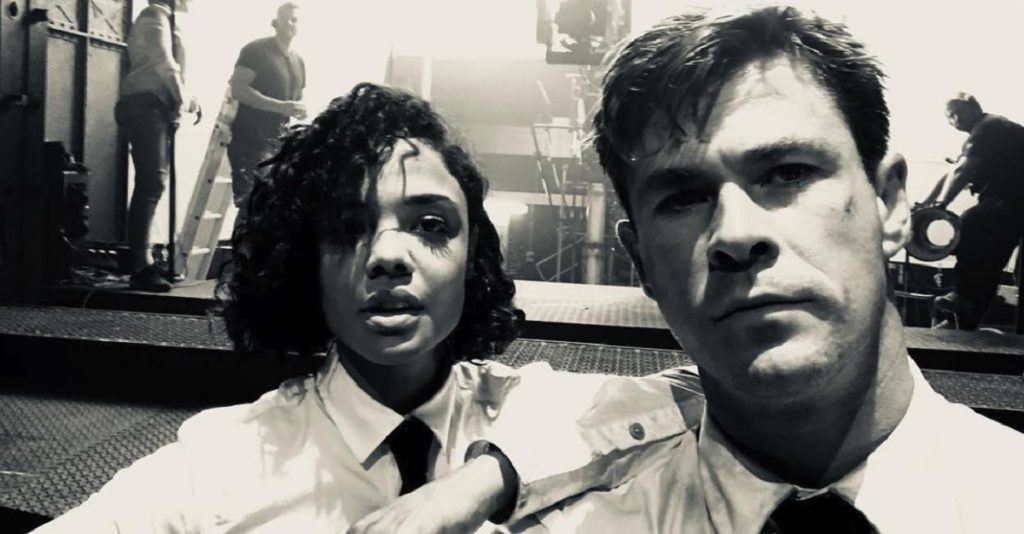 Men in Black Reboot has an Official Title & new Image

Tessa Thompson and Chris Hemsworth are no strangers to battling aliens in faraway lands—the two last teamed up for Taikia Waititi’s cosmic superhero caper Thor: Ragnarok. The dynamic duo is back for F. Gary Gray (Straight Outta Compton)’s Men in Black reboot, and now we’ve got the official title—Men in Black: International. The film was a part of Sony’s presentation down in São Paulo for the Comic-Con CCXP, which also included the first trailer for Spider-Man: Far From Home. And like Far From Home, which takes Spidey from Queens to Europe (to say nothing of his trip to space in Avengers: Infinity War, which didn’t turn out too well for him), the fourth installment in the MIB franchise takes Thompon’s Agent M and Hemsworth’s Agent H to London. Thompson was down in Brazil to help hype the new iteration of MIB.

Hemsworth shared a new image from the film on his Instagram feed:

#FBF shooting MIB with my partner in galaxy protection @tessamaethompson when we were ripping aliens a new one. From memory, this shot was taken in between set ups when Tessa and I noticed some criminal activity on the streets in London. We immediately drew our laser guns and took down one of the largest crime syndicates in the city. Happy to say the streets of London are now safe again. You’re welcome world. #MIBInternational ? @meninblack

The Men in Black have always protected the Earth from the scum of the universe. In this new adventure, they tackle their biggest, most global threat to date: a mole in the Men in Black organization.