They invented gangsta rap and put West Coast hip hop on the map, and in the process triggered a tectonic shift across an entire cultural landscape. N.W.A. was the baddest, boldest, most influential rap band of their era. Coming from South Central Los Angeles in the mid 1980s, N.W.A.'s members—Ice Cube, Eazy-E, Dr. Dre, DJ Yella and MC Ren channeled the rage, remorse and bravado of the streets of Compton, a hotbed of police brutality and gang turf wars between the Crips and the Bloods, and blasted it into the cultural firmament. Hardly aiming to change the world, N.W.A. created music that was radical for being so raw and honest, reporting on and from a place most of America knew nothing about.

Their music was, of course, revolutionary. Two of its founding members have gone on to become hugely successful. Ice Cube and Dr. Dre have conquered Hollywood (Ice Cube has gone from Boyz in the Hood to Friday—which he co-wrote—to family films like Are We Done Yet to 21 and 22 Jump Street) and they've conquered business (Dre is a co-founder of Beats, which Apple bought in 2014 for $3 billion), while both staying active in the music world. Dre has become one of the most successful music producers of his era, having launched by Snoop and Eminem, and just released his first album since 2001's 'The Chronic,' titled 'Compton: The Soundtrack,' to stellar reviews. While DJ Yella and Mc Ren haven't had the same success, they've remained active in music and varied interests (DJ Yella was a prodigious porn director for a time, and MC Ren has worked with bands like Public Enemy). The fate of N.W.A.'s brashest member, however, was a much darker picture. Eazy-E died of complications due to AIDs in March of 1995.

For a band that invented a new genre of rap and put an entire geographic region on the map, their story has largely gone untold. That is until in March of 2009, when development of the film that would become Straight Outta Compton began at New Line Cinema, enlisting writers S. Leigh Savidge and Alan Wenkus, with Tomica Woods-Wright, Ice Cub and Dr. Dre set to produce. As production moved along, another writer was brought in, Andrea Berloff, who set to work interviewing everyone should could to help craft a story worthy of the band's turbulent, explosive rise. Eventually Universal got on board, the script was finished and the cast, including O'Shea Jackson Jr. playing his father, Ice Cube, Corey Hawkins as Dr. Dre and Jason Mitchell as Eazy-E was set.

We spoke to Berloff about what it was like working with Ice Cube and Dr. Dre to craft this story, how she did her research and more.

How did you get involved with the project?

In 2010 I was approached by New Line Cinema. They knew I had a lot of experience, well, "a lot" is relative I should say, in putting together true stories and working with real people to get their stories told [Berloff co-wrote World Trade Center for Oliver Stone]. I think the reason they brought me on is I was really insistent from day one that this wasn’t an urban movie, but an event movie about the whole country.

What were some of these national themes you thought the story of N.W.A. would touch upon?

I think there’s so many themes the story of N.W.A.'s rise brings out—this is the story not just of the rise of hip-hop, but also the rise of testing the limits of what is freedom of speech in this country. What is art? What isn't art? All of these are gigantic themes that N.W.A. provoked. 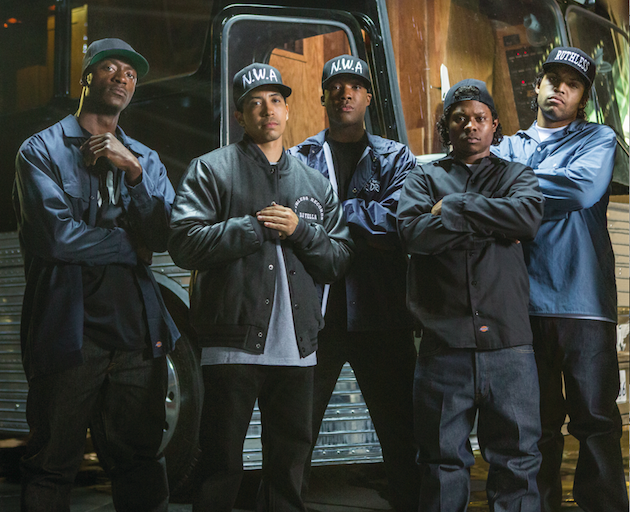 How'd you approach the script? How'd you figure out what had to be in, what to condense, and what to leave out?

I approached this the same way I’d approach any story about a living person, I sat down and talked to all of them. It took me over a year of interviewing everybody, I had something like 1,000 pages of transcripts, I had the guys, record executives, cultural historians, anyone who could shed light on N.W.A. and their time. It’s one thing for me to say what I think what a movie about N.W.A. should be, versus asking Ice Cube what he thinks a movie about N.W.A. should be. Cross referencing all those points of view with cultural historians—that process took well over a year. I worked on the script for three and a half years, and I wasn’t the only writer on the movie. [Jonathan Herman eventually came in and did a final pass on the script.]

What do you do with 1,000 pages of transcripts?

The good thing about all those pages is you really have some of your dialogue written for you—I don’t have to make up the words, I can use it the way they phrased it. So it becomes almost the spine of the screenplay itself. That’s the artistry behind it, looking at those 1,000 pages and figuring out what to do with it. When you get to a place in the transcript where the hair on the back off your neck tingles, you’ve got something interesting.

What did you in the case of conflicting memories?

Great question—at one point one of the producers and I actually called a meeting with Dre and Cube, and said, 'Okay, you say it’s this way, and you say it’s that way, let’s figure it out.' So they talked it through and came to a conclusion. That’s the gift of having them involved, I didn’t have to make any decisions about the truth of something that happened twenty five years ago. 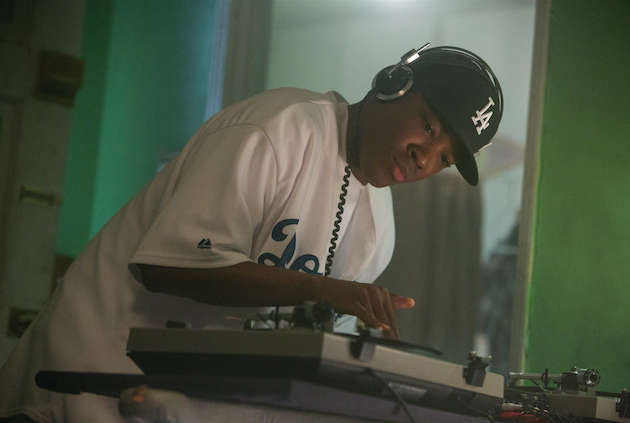 What were some of those conflicting memories?

It wasn’t over anything big, just small points about how certain songs were created.

How did you thread in the music?

N.W.A. didn’t have 30-years of music to choose from, they had a couple of albums, and on those albums they had a few songs that were absolutely necessary. “Fuck Tha Police” is their seminal song, in my opinion. The world they lived in created that song, and then we looked at how that song turned around and affected the world they lived in. That and “Straight Outta Comptom” were the two songs that really informed the storytelling. The other songs are there for fun and color, but those two songs you can start to build a story around.

Dre’s mom has written a book, and Jerry Heller wrote a book (their former manager, played by Paul Giamatti in the film), but beyond those two books, which weren’t using the guys POV, there wasn't much. There was a couple of great articles, one written by Jonathan Gold in LA Weekly at the beginning of their rise that was an interesting, gushing piece about their importance. But beyond that article, which captured the energy of what was coming, there’s really nothing. If I hadn’t had access to the guys, I don’t see anyway we could have written this script.

What did you learn that surprised you while researching and writing this script?

Once you start realizing what their world was like, what was going on in Compton and South Central in the 80s, it was fucking chaos and hell, the power of their music becomes obvious when you think about it. They were abused by the LAPD. Of course they wanted to say ‘Fuck tha Police,’ and once they had the platform and power, they threw it back at the police. Much of America was appalled, but it really hit a nerve for a lot of young people. It should have been obvious, once you analyzed it, but it should be especially poignant right now. We did not have a crystal ball, we had no idea this conversation would be going on right now.

Any specific difficulty you faced in writing the script?

Pacing on this one was actually not an issue because I felt like the music moved so fast so you had no choice but to move fast. I didn’t have a hard time there, but I know which part I like best.

Which part is that?

It's when Easy steps up to record "Straight Outta Compton." They’d rented a studio, and somebody else was going to record the song, this group called HBO from New York, who didn’t show up, but they’d paid for the studio space, so Easy stepped up. At that point, Easy didn’t see himself as an artist—he was a businessman who was going to put this venture together with Dre because he believed in Dre’s talent, but he did not set off to be a rapper. So at first in the studio, he was screwing around, but Dre heard something in his voice that he thought was unique and interesting. And Dre is an incredible artist and can spot talent…he heard the first line out of his mouth and stopped him and said, 'Wait, that was good.' That spark of discovery is so great, and the fact that Easy didn’t know he had it in himself, but Dre heard it, and that this could have only happened in that moment in time…that’s so exciting to me. That was the moment I couldn’t wait to write.

What do you hope people take away from this film?

What’s going to be compelling, I hope, is the music which is still as fantastic today as it was 25-years ago, and I think people are going to be surprised how just awesome it is, once you really hear the full force of the music again behind you, and asks the question whether it belongs among the classic albums in American music, and I think it does. These unlikely guys created such a powerful album, I think that will be much more apparent.