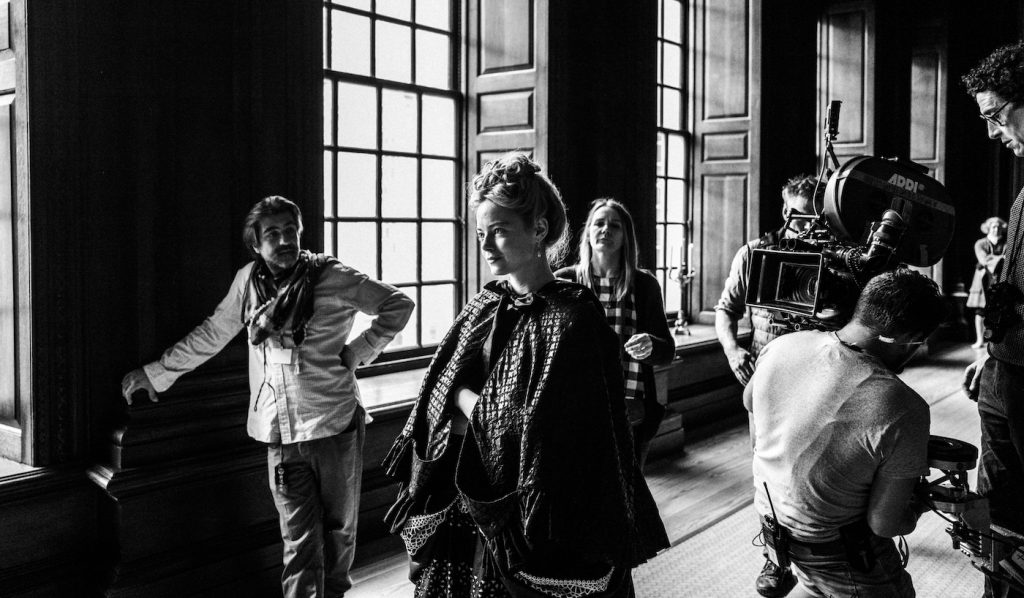 Before The Favourite came his way, Robbie Ryan had never worked with Yorgos Lanthimos, but he did admire the Greek director’s offbeat art house films Dogtooth and Killing of a Sacred Deer. So when Lanthimos invited Ryan to shoot his 18th-century black comedy about Queen Anne (Olivia Colman) and rival courtiers (Rachel Weisz and Emma Stone), the Irish cinematographer, fresh off indie film triumph American Honey, eagerly signed up. “Yorgos doesn’t stick to convention,” Ryan says. “He wanted to bring a new style to this genre and was very keen about shooting on 35-millimeter film with available light and different kinds of camera moves.”

For The Favourite, Ryan frequently positioned the camera at an extremely low angle. Why go low? Referring to the 17 rabbits that Queen Anne kept as pets – – one for each of her dead children — Ryan says, half-joking, “Somebody said it’s the point of view of the rabbits, so I’ll stick with that.” Fitting the camera with an ultra-wide fisheye lens, Ryan used a dolly rig mounted with a low-slung camera head. “It’s literally on the ground, but you can still move around,” Ryan says. “You have to get into this very contorted position, and then operate off the monitor because there’s no way you can have your eye to the eyepiece.”

Cast members quickly became accustomed to the odd camera placement, Ryan says. “I remember the first day we shot Emma Stone in this scene where she’s making hot chocolate for the queen. The camera was really low on the floor so she just looked down at me and said ‘Oh, it’s going to be that kind of shoot is it?’ Actors don’t like cameras at low angles but I think this film actually makes them look more beautiful. Olivia, Rachel and Emma totally trusted Yorgos and did anything he asked of them.”

Relying mainly on dolly-mounted Panavision cameras equipped with Primo lenses, Ryan deployed 360-degree “whip pans” to move quickly from one character to another. He says, “I’d never done whip-pans before so I quite enjoyed it. In a normal edit you might have a shot of someone coming through the door and then you get a [separate] shot of the other person reacting to them. With whip pans, you’re doing the edit in camera, which is exciting. It’s a bit more pressure, but we’d usually get it right after a few takes.”

The Favourite was filmed in and around Hatfield House, a 16th-century estate in Hertfordshire furnished with grand staircases, giant drawing rooms, and long corridors. The capacious interiors, dressed by production designer Fionie Crombe (Top of the Lake) provided Ryan with actor-friendly backdrops. “The walls in the castle are fairly dark because there’s a lot of tapestry and dark wood,” Ryan says. “That backdrop allowed the skin tone of the actors to really shine.”

Even though Lanthimos banned artificial lights from the set, Ryan managed to capture vivid images. Taking inspiration from Stanley Kubrick’s Barry Lyndon, Ryan and Lanthimos used candlelight to illuminate interior night-time scenes. For day-time scenes, Ryan relied entirely on natural sunshine. “Luckily the castle has very big windows, so when it was sunny out, we had this soft light coming in,” he says. “It was almost like the kind of beautiful light you’d have in photographer’s studio, the kind of light Irving Penn used for his still portraits.”

For exterior scenes, filmmakers accommodated the whims of weather. One scene features Weisz and Stone shooting at pigeons against a backdrop of overcast skies. Ryan says, “It’s a British spring so obviously on some days the skies were a bit gray. Because our film language tended to be a low angle, we see a lot of sky, but if you look at the costume and production design, the palette is very black and white. The grey sky reads as a light background, so the characters in their dark costumes stand out against white. We got this kind of monochromatic effect that turned out to be good for the color palette of the film.”

For all its off-kilter design elements, The Favourite serves first and foremost as a showcase for three stars traversing emotions from the sublime to the ridiculous. “It was a pleasure to work with these actresses because they’re a very animated, friendly bunch,” Ryan says. “A lot of time, they’d be talking so much between takes that Yorgos would have to shout them down and say ‘Okay, we’re making a film here. Can you stop talking please?’ Even when they didn’t have a scene to shoot, they all wanted to be on set as much as possible because they were telling each other stories and having a laugh.”

Ryan’s camera work goes a long way towards underscoring the royal characters’ neurotic interplay. He says, “Camera movement is very tuned into the way Yorgos likes to make films. He’s a director who likes to try things out and on The Favourite, he was great at surprising everybody. He’d go ‘Let’s try this’ and you go ‘Really?’ ‘Of course!’ Working with Yorgos, every day was interesting.”

The Favourite is in theaters on this Friday, November 23.