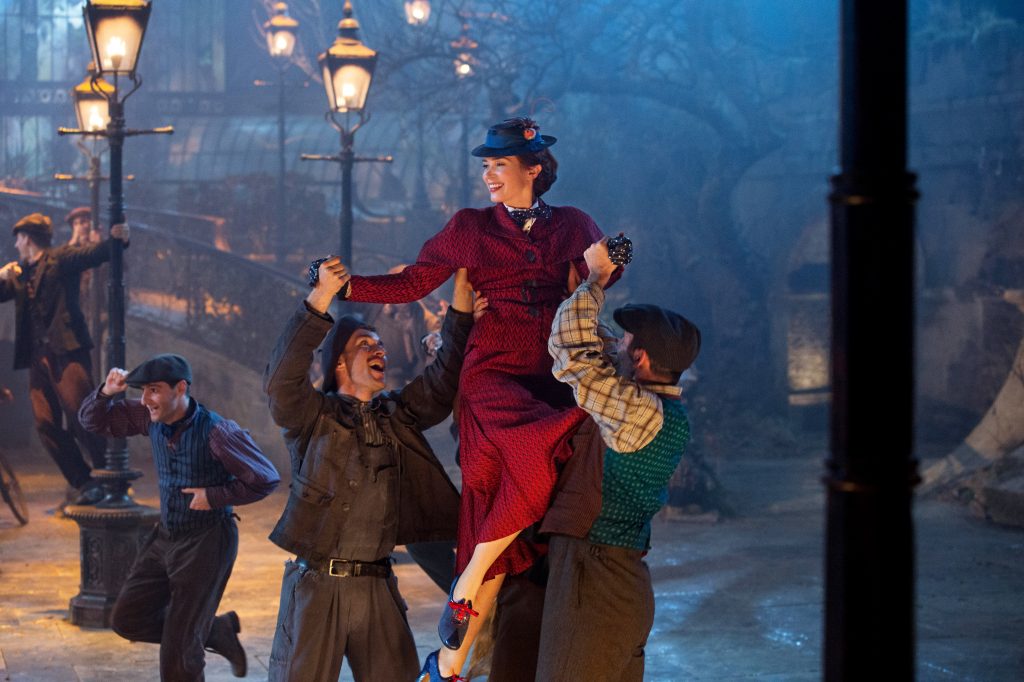 Every sight, sound, and sneak peek of Mary Poppins Returns has indicated it is going to wrap everyone in a cotton candy cloud of joy and nostalgia and float us all away to the sky. However, you can never fully count on a confectionary cloud floating experience until it is confirmed by the critics. Consider it done. Disney held the magical premiere last night and early reviews report that the audience was completely enchanted.

#MaryPoppinsReturns is wonderful. It anticipates and miraculously evades any cynicism and leaves you in a state of joy.

#MaryPoppinsReturns is absolutely delightful, packed with old school charm and it keeps you smiling the entire time. So much color and warmth and wonder – a film about believing in the ones you love and loving to imagine the possibilities. pic.twitter.com/6WmYErvUWD

I can finally say that I loved #MaryPoppinsReturns! Emily Blunt is practically perfect in every way! Also, @Disney needs to make branded tissues for every showing! So lovely! pic.twitter.com/z7LmfJMrde

Nearly every portion of the production has been complimented. The animation, choreography, original songs, and production design all received high praise. Several people said they adored Lin-Manuel Miranda in his biggest film role to date, and Atom Tickets’ Alisha Grauso said he even got to flex some of his Hamilton type muscles.

#MaryPoppinsReturns has all the nostalgia you’d expect while still feeling modern. Emily Blunt lights up the screen as Mary and you will fall in love with @Lin_Manuel‘s Jack. And oh the music! It’s so good and nearly inspired us to stand & cheer at the end of many songs. (2 of 3) pic.twitter.com/OPwJIF1ZW3

And – *ahem* – they allow Lin-Manuel to go full Hamilton in it. Just sayin’.

#MaryPoppinsReturns is a jolly nostalgia-high with a blend of whimsical and heartwarming musical numbers & moments. It does feel more like a remake than a sequel at its core but it’s a new good old-fashioned musical worthy of jumping back into. Blunt & Miranda are magic. pic.twitter.com/TskLuXowI6

Most of all, however, no one can stop talking about Emily Blunt. Paul Carlson hailed, “A perfectly cast Emily Blunt is exquisite as the fantastical nanny.” Blunt has spoken on press tour about how nervous she was following in Julie Andrews’ footsteps, but it seems the fear was unwarranted. Cinema Blend said their expectations were met in the most satisfying way.

#MaryPoppinsReturns is a faithful whirlwind of magical delight! A perfectly cast Emily Blunt is exquisite as the fantastical nanny. The overall movie is very reminiscent of the original – but it’s a progression and not a retread. A sequel & performance worthy the beloved classic. pic.twitter.com/m0zbKp2h9H

#MaryPoppinsReturns is a delightful journey down memory lane full of uplifting messages and sound advice. The animation pops, the song & dance numbers sing, and Emily Blunt is as great as she could be taking over for the legend that is Julie Andrews. Overall a resounding success! pic.twitter.com/ai18jRun6A

The thing about #MaryPoppinsReturns is that the movie experience was literally everything I hoped it would be from the day Emily Blunt was cast, and that never happens.

Flickering Myth writer EJ Moreno said it was the best Rob Marshall musical since Chicago. In my opinion, Chicago is only rivaled by Joel Schumacher’s Phantom of the Opera for the greatest modern movie musical, so that is cause for excitement. Mary Poppins Returns is also generating awards season buzz, while will soon be upon us.

“Mary Poppins Returns is a showstopper! Disney pulled every trick out of the bag for this film, and this is Rob Marshall’s best musical since Chicago. A must-see for some uplifting fun!” – EJ Moreno, Flickering Myth pic.twitter.com/1wJ39LGGFj

Not coincidentally, Chicago was the film that put movie musicals back on the map and pulled down six Oscar wins. It even took home Best Picture in 2003. Catherine Zeta-Jones won best supporting actor and the film nabbed Costume Design, Sound Mixing, Film Editing, and Production Design. Those are all categories that have tongues wagging for Mary Poppins Returns. Perhaps this could be another big year for the movie musical.

Tons of nods to the OG. The awards landscape has been turned on its head. #MaryPoppinsReturns is an instant classic! pic.twitter.com/ets2YVro52

I am fortunate enough to have seen #MaryPoppinsReturns 4 times already and I can’t wait to see it 40 more. It is the most joyful, magical, heartwarming and charming film I have seen all year and it deserves every ounce of praise there is! Practically perfect in every way! pic.twitter.com/qDHvTo7N9x

Featured Image: Emily Blunt is Mary Poppins in Dinsey’s original musical MARY. POPPINS RETURNS, a sequel to the 1964 MARY POPPINS which takes audiences on an entirely new adventure with the practically perfect nanny and the Banks family.