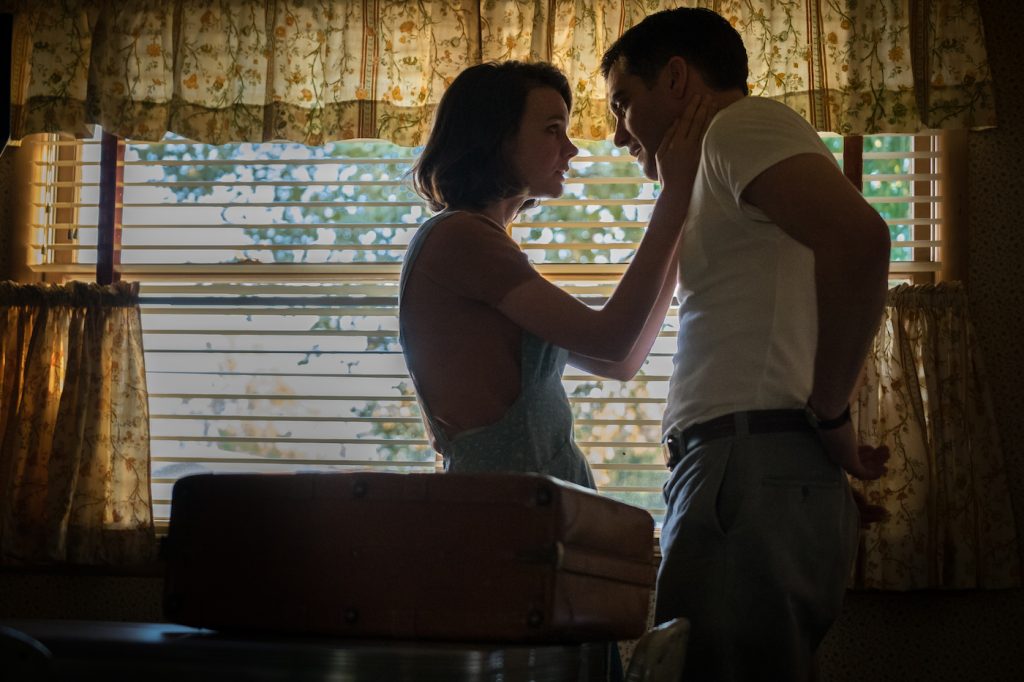 “Rarely do you get a character so well written as a woman,” said Carey Mulligan of 34-year-old Jeanette in Wildlife, co-written by couple Paul Dano (There Will Be Blood) and Zoe Kazan (The Big Sick).

Jeanette, a dutiful wife and mother, begins to unravel when her husband Jerry (Jake Gyllenhaal), newly jobless, leaves their family to fight wildfires raging across the Montana mountainside near the Canadian border. It’s 1960, and Jeanette’s composed façade gradually crumbles to reveal a woman clinging to whatever she can to survive. Feeling indignant and vulnerable, Jeanette catastrophizes his departure. “A part of her thinks he’ll never come back again. We see her having to take control, and the misguided way that she does that,” Mulligan said at a recent Times Talk post-screening discussion with Dano, Kazan, and Gyllenhaal, moderated by veteran New York Times reporter Logan Hill.

“I think she had an unspoken contract with her husband,” Mulligan continued. “As long as he keeps trying, so will she. In turn, she’ll be a good wife and a good mother, and make do with the little that they have. When he breaks that contract, everything that she’s suppressed for 14 years starts to come out.”

Based on the 1990 novel by Richard Ford, “Wildlife” marks Dano’s directorial debut. The audience observes the dissolution of the couple’s marriage, and Jeanette’s flailing rebellion, through the eyes of their son, 14-year-old Joe, played by Australian actor Ed Oxenbould.

“The character reminded me of myself,” said Dano, acknowledging his adolescent desire to grasp the mystery of “who our parents are. I wanted to know more, by making a film, to understand Jerry and Jeanette, as if to understand why things can fall apart or crash together.”

Tension simmers under the surface as Joe observes his mother’s increasingly erratic behavior, and with a refusal to turn a blind eye, witnesses her betrayal of his father. It’s evident that, for the first time, Joe is realizing his parents possess hopes, desires and needs exclusive of one another or the family unit.

Rediscovering her individuality, while fearfully navigating the pressure to support her son financially, Jeanette copes by playing with her sense of identity. She revives the clothes of a former self and unfurls a flirtatious and vibrant disposition.

“I remember discovering that my parents had past lives,” Dano said.

Young Joe’s awareness is constant, active and seeking. “We talked about needing to weaponize his watching,” said Kazan, who then turned to Dano: “I think I see that in you. The way that you were with your family is probably how you are in the world, always observing.”

Dano wrote the first draft of Wildlife in his hotel room while filming Prisoners, a 2013 crime/thriller also starring Gyllenhaal and Hugh Jackman. Kazan, his partner of 10 years, refined the emotionally-attuned screenplay.

Co-writing the script was a “lovely, conflict-free process, trading the script back and forth for three to four years,” said Kazan. She actually chopped Dano’s initial script “to little bits, and like rearranged it on the living room floor, because the book has a very different structure. Freud would make a lot of that probably,” Kazan joked.

The screenplay follows suit. Dano commended the actors’ character development and ability “to fill the space between the lines—which is where the film is,” Dano said. “I feel like life is about that. It’s not always what we say.”

A Sundance and Cannes Film Festival favorite, Dano’s adaptation captures nuanced textures of time and space. Gyllenhaal underscored Dano’s powerful perception of the pace of time—when the awakening of adulthood feels both sudden and gradual. “You want everything to move so fast” in adolescence, Gyllenhaal observed, “but the slow movement will stay with you forever.”

Kazan added: “A week can feel like a year.”

Dano also pursued exquisitely composed shots. “Paul had spent so much time picturing what an image would be, based on where the sun was setting, and this one particular house he had seen,” Gyllenhaal said. “As an actor, as much as you like to have the opportunity to spend time and indulge, sometimes, when someone sets a timer and says: ‘go, you literally have 30 seconds,’ something else happens. There was a true beauty.”

Gyllenhaal continued: “There’s a reason people are talking about what an incredible filmmaker he is in this space, because the profound confidence and skill it takes to do what he’s done as a first film, it’s really rare. It doesn’t just take preparation and focus and giving your whole heart to something. It takes a skill that is inexplicable. He has it.”

Wildlife is in theaters now.