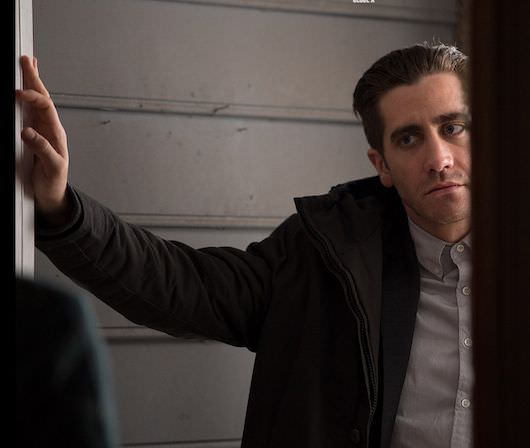 Scorsese has De Niro and DiCaprio. Steve McQueen has Michael Fassbender. Nicole Holofcener has Catherine Keener. Now Denis Villeneuve, whose 2010 Incendies earned a Best Foreign Language Film Oscar nomination, also has a muse: Jake Gyllenhaal. The actor teamed with the French Canadian director in two films that sparked plenty of buzz earlier this month when they screened at the Toronto International Film Festival.

The higher profile of their one-two punch is the thriller Prisoners, which gets a wide release from Warner Bros. on September 20. Gyllenhaal plays Detective Loki, a taciturn cop in a dreary Pennsylvania town who's charged with solving the disappearance of two six-year-old girls on a bleak Thanksgiving day. Their fathers, played by Hugh Jackman and Terrence Howard, take matters into their own hands when they corral the suspect (Paul Dano) that Loki questioned and released. Prisoners, with a powerhouse cast that also includes Maria Bello, Viola Davis and Melissa Leo, laces its story of vigilante justice with moral ambiguity.

The second collaboration is the surreal psycho-drama Enemy, a Canadian production that Villeneuve and his star shot in Toronto prior to Prisoners. Based on José Saramago's novel "The Double," Enemy features Gyllenhaal in a dual role as a history professor who sees his doppelgänger in a film and decides to track him down. A24 snagged the U.S. distribution rights to Enemy, which also stars Melanie Laurent, Sarah Gadon and Isabella Rossellini, for a spring 2014 release.

It was the experience of shooting the experimental Enemy that bound the actor and director, says Gyllenhaal.

“When I read Aaron Guzikowski’s script [for Prisoners], I was in the middle of shooting Enemy with Denis. That collaboration was so layered and so intense — we were out every night after shooting, discussing the scene, the structure of the story.” He trusted that Villeneuve could deliver a quality film with a bigger budget and higher profile. “His intention is just to make great movies, no matter the size. We both love studio movies, larger movies, but Denis is obsessed with details and the themes that connect to the movie,” says Gyllenhaal. “He’s interested in the psychology of characters, and in the detail and the preparation and exploration. I love that.”

“When we met to rehearse Enemy, we bound together like we were brothers,” says Villeneuve. “It was the right project for both of us. I had just come off Incendies and wanted to try something different. So we spent several weeks in a Toronto apartment experimenting with the character and how we would tell the story. We'd sometimes do 30 or 40 takes to get something right. We wanted to continue that on another project.”

Before Enemy, Villeneuve had already read the script for Prisoners but had resisted making it. “I was scared of the material at first,” he says. “It was too much darkness, too much violence… I was anxious about a lot of scenes; I did not want to fall into cliche. I was so lucky to work with [cinematographer] Roger Deakins. He is a genius. He’s like a painter. There was a lot of ugliness in this story and he made poetry out of it.”

Villeneuve’s confidence was bolstered by having Gyllenhaal and Jackman in the leads; the two actors became close friends during the shoot as they worked closely with Villeneuve to create characters and an atmosphere that transcended genre confines.

“When you have a screenplay that’s so structurally sound, there are a number of different interpretations you can take,” says Gyllenhaal. “Denis and I talked, and I thought it would be fascinating to play Loki against type. I liked throwing question marks all over — not randomly, but based on a backstory. Denis allowed for great improvisation in those moments. Other directors might be afraid of where that might be going but he was so loving and encouraging.”

Gyllenhaal says he also immersed himself in watching police interrogation videos that he admits were “horrific.”

“I could feel myself resist how dark this world was. I could feel it inside, so visceral that it made me panic. But it broke me into this world.”

The disturbing subject matter no doubt contributed to the tension-releasing ribbing that was still flowing during TIFF press interviews. When Gyllenhaal was asked about a scene in which Loki does battle in a basement infested by snakes, he said it was “an allegory for my relationship with Denis.” Then he did an imitation of the director’s French accent: “They’re going to be real snakes! And they’re going to be poisonous!” he joked. But he quickly returned to the somber tone that marks Prisoners. “The snakes were no fun but Denis had no fear. He’d grab them by the fistful. I pretended I wasn’t afraid of them. There was a risk, but Denis wanted everything to be real and that elevated [the film]. At the end of the shoot, we had to make sure we had them all and didn’t leave any behind,” he said.

This is why Villeneuve enjoys working with Gyllenhaal. “He is able to surprise me. What I love about Hollywood is that I get to work with this level of talent,” he says. “Look at the actors that I get to put in the same frame. It was explosions going off and all those moments are in the film. That was a huge privilege for me.”