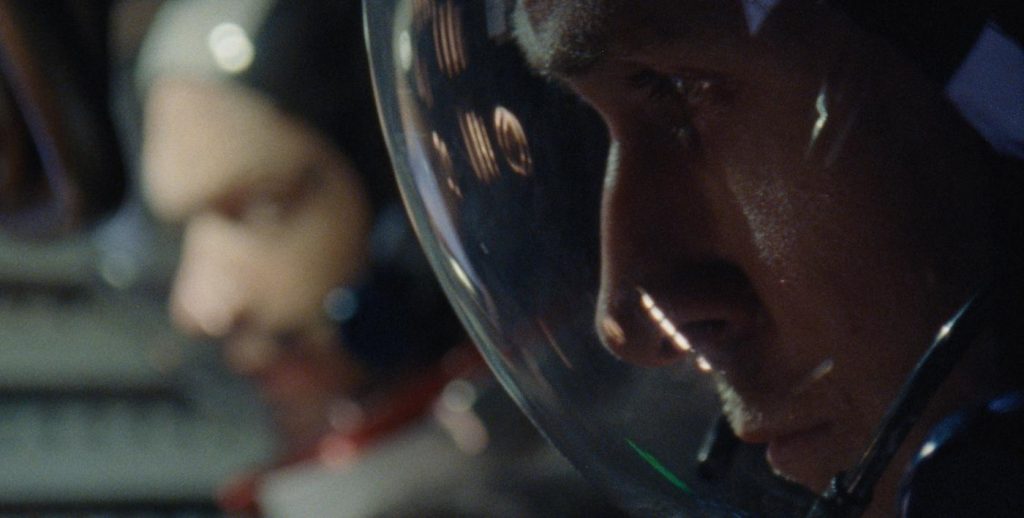 On September 12, 1962, President John F. Kennedy gave what would be one of the most iconic speeches in American history. Speaking at Rice University just six weeks after the Soviet Union’s Yuri Gagarin became the first human being to reach space, Kennedy delivered his speech in support of NASA’s fledgling Apollo program. In a riveting new trailer for Damien Chazelle’s First Man, Kennedy’s speech is the backdrop for the action on screen, in which Neil Armstrong (Ryan Gosling) his fellow astronauts, and NASA’s team of scientists prepare for what was at the time the most dangerous mission in human history.

First Man bowed at the Venice Film Festival to rave reviews, and only garnered more acclaim when it made its North American premiere in Toronto. When we spoke to actor Skyler Bible in Toronto, who plays backup pilot Richard F. Gordon Jr. in the film, he made it clear to us that he knew something special was going on while he was on set. “There was meticulous attention to detail about everything, down to the food in the mission control room. Everything was very historically accurate, even the watches we had on were set to the actual time of the meetings we were in during each scene. I mean every detail of this amazing story just adds up. It was really cool.”

That obsessive level of detail, coupled with the film’s relentlessly tense point of view (there has never been a movie about space exploration in which you’ve gotten a more visceral look at what the experience is like for the astronauts themselves) has elevated First Man to one of the best film ever made about space.

Check out the new trailer here. First Man blasts into theaters on October 12.

Here’s the part of Kennedy’s speech used in the trailer, in case you’re hungry for a reminder of what presidential inspiration reads like:

“These are extraordinary times, and we face an extraordinary challenge. The dramatic achievements in space which occurred in recent weeks should have made clear to us all the impact of this adventure on the minds of men everywhere. Now it is time to take longer strides. Time for a great new American enterprise. Time for this nation to take a clearly leading role in space achievement, which in many ways may hold the key to our future on earth. I believe this nation should commit itself to achieve the goal of landing a man on the moon and returning him safely to the earth. We set sail on this new sea because there is new knowledge to be gain. Can we help decide whether this new ocean will be a sea of peace or a new terrifying theater of war? But why some say the moon? Why climb the highest mountain? We choose to go to the moon in this decade and do the other thing and do the other thing not because they are easy, but because they are hard.”