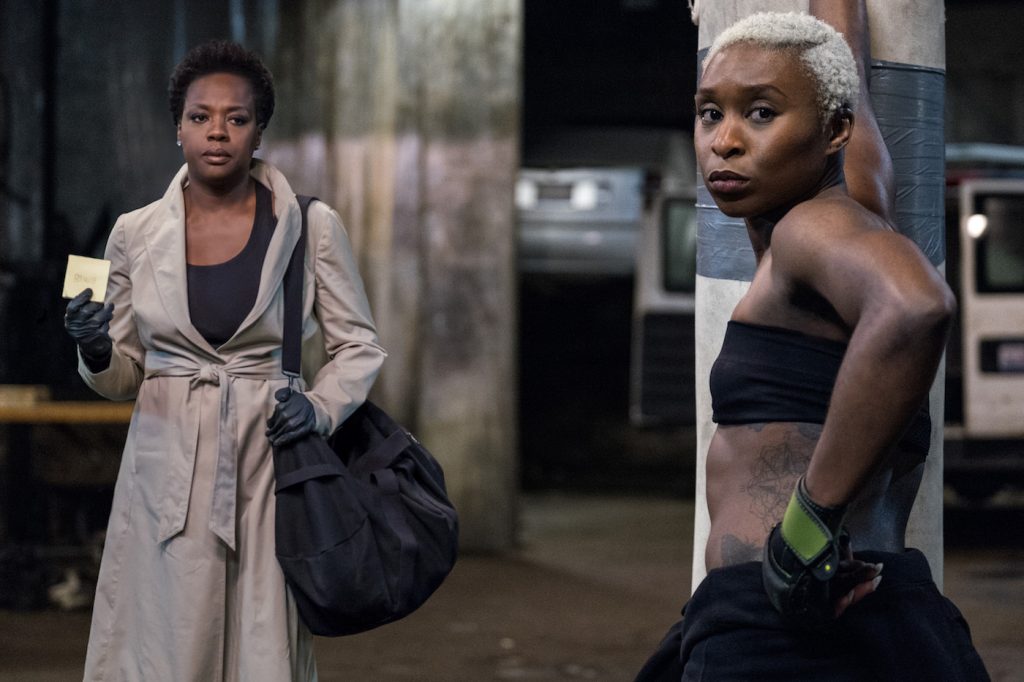 In the post-Wonder Woman era, warriors like Black Panther‘s Okoye (Danai Gurira) make mincemeat of evil-doers with the swing of a spear. This fall at the movies, plenty more fierce female characters are taking matters into their own hands as they fight for justice, power, respect or all of the above. Historical perspective comes courtesy of Mary Queen of Scots (Dec. 7) featuring Saoirse Ronan as the 20-year old monarch who commands an army of thousands in her attempt to take over England. Colette (Sept. 21) shows how the turn-of-the-century novelist defied her domineering husband, scandalizing Paris high society in the process. As for contemporary takes, here’s a look at six fall movies that celebrate women, both fictional and non-fictional, who forge their own paths.

She helped define the action heroine archetype 17 years ago by starring in J.J.Abrams TV hit Alias. Now Jennifer Garner returns to action thriller mode as a young mother-turned-vigilante Riley North. Peppermint director Pierre Morel helped create the modern male-centric revenge fantasy with Liam Neeson’s Taken and here, he showcases Garner’s physical prowess as her character goes after the killers of her husband and daughter. As in Alias, Garner did most of her own stunts, with a little help from longtime body double Shauna Duggins. Addressing the movie’s dark themes, Garner muses, “I don’t know if this version of justice fills the hollowness in Riley’s soul.” Not to get too heavy about her genre romp, she adds, “I hope audiences get a huge tub of popcorn in the theater and have a blast.”

Still belting out “I Love Rock and Roll” at age 59, guitar-slinger Joan Jett broke the mold not by looking pretty but by playing hard. This documentary looks at her early years in the all-girl band The Runaways as the foundation for her solo career as a black leather-clad champion of no-frills rock. Director Kevin Kerslake waxes poetic about the subject of his film. “Joan Jett’s an alley cat whose iconic howl is either mother’s milk or a call to arms or both for millions of people all across the world,” he says. “A feminist manifesto in the flesh. A defiant, never-say-die general and foot soldier who tore down the old world patriarchy so that little girls could plug in and play it loud.”

Starr Carter (Amandla Stenberg) in The Hate U Give  (October 19)

Based on a best-selling Young Adult novel inspired by the Black Lives Matter movement, The Hate U Give casts 19-year old actress Amandla Stenberg (The Hunger Games) as high school student Starr Carter, who takes action after a police officer shoots her best friend. Stenberg, a voracious reader, lobbied for the role as soon as she read Angie Thomas’ manuscript. “I called my agent and said ‘We gotta do this!’ The way that this black girl is characterized, there’s so much heart and depth and nuance.” Stenberg did not hold back when it came to making suggestions to screenplay writer Audrey Wells. “Anything that struck me as inauthentic or not accurate to me and Starr’s experience, I would communicate it,” she told Variety. “I didn’t feel like I was just fulfilling the role of an actor. I felt like I was doing a lot more.”

War correspondent Marie Colvin risked her life in order to cover terror-ridden hot spots from Syria and Zimbabwe to East Timor and Libya. The Long Island-bred, Yale University-educated reporter braved hazardous conditions in order to tell the truth about the facts and faces on the ground. In this biopic, Oscar-nominee Rosamund Pike (Gone Girl) portrays the London Times correspondent. “I didn’t realize how timely it would be, with journalists under attack and truthful reporting suddenly called into question,” Pike told USA Today. “I feel that there’s no better moment to be telling the story of a journalist who literally put herself on the line to give a voice to people who didn’t have a voice themselves.”

This heist flick from Oscar-winning 12 Years a Slave director Steve McQueen re-makes the 1983 British mini-series by Lynda La Plante, who later created Helen Mirren’s tough detective character in the ground-breaking Prime Suspect series. This American version of Widows takes place in Chicago, where four women (Viola Davis, Michelle Rodriguez, Elizabeth Debicki and Cynthia Erivo), burdened by the deaths of their husband, hatch a scheme to get themselves out of massive debt. “When you see the movie, it’s not the color or the sexual orientation or the ethnicity [of the characters] that walk into the room,” Davis told Entertainment Weekly. “What walks into the room are people who are in a desperate situation, and that, in and of itself, is a revolutionary idea.” As her character Veronica says in the trailer, “If this whole thing goes wrong, I want my kids to know that I didn’t just sit there and take it – I did something.” Bonus points: Widows is co-written by Gone Girl author Gillian Flynn, whose recent HBO series Sharp Objects galvanized fans of female-centric thrillers.

The grim adventures of Sweden’s best know badass Lisbeth Sanders continues in this new iteration, which features The Crown Emmy nominee Claire Foy as a very different kind of powerful woman. Unlike her hyper-genteel Queen Elizabeth, Foy’s Lisbeth strings men upside down until they accede to her demands. Lisbeth’s mission in The Girl in the Spider’s Web remains undiluted from the previous movies based on Stieg Larsson’s best-selling novels. She’s still wreaking havoc on the abusers of battered women. But this she’s taking on a scary crew of Russian gangsters. As director Fede Álvarez explained to Collider, “[Lisbeth] doesn’t care if you like her or not, so it’s different from most heroes who are looking for some sort of approval or they are more socialized. She’s none of those things, and that’s part of what fascinated me.”