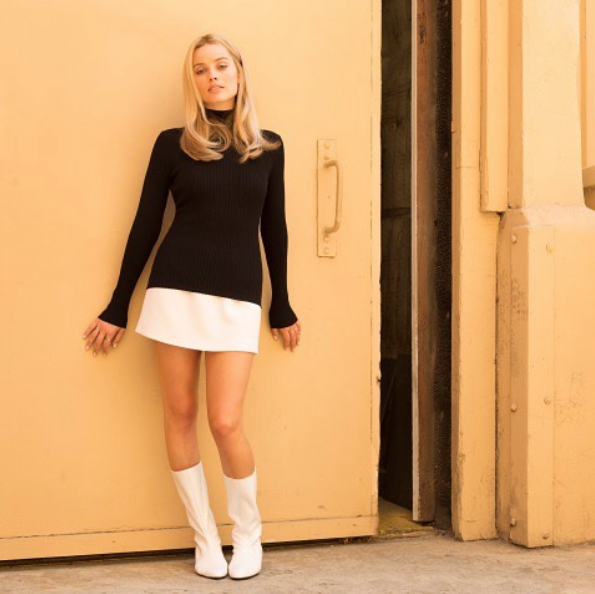 We’ve already gotten our first look at the fellas (Brad Pitt and Leonardo DiCaprio), and now it’s Margot’s turn. The I, Tonya star has shared the first photo of herself as Sharon Tate on set of Quentin Tarantino’s Once Upon a Time in Hollywood, looking strikingly similar to the late actress who was tragically, infamously one of the victims in the Manson murders.

Once Upon a Time in America was the subject of an intense round of bidding by most of the major studios, and was ultimately won by Sony. The original script from Tarantino is apparently something of a kin to his legendary 1994 stunner Pulp Fiction, with an outrageous cast and multiple storylines. DiCaprio and Pitt play former Western TV star Rick Dalton and his longtime stunt double Cliff Booth, respectively. DiCaprio’s Dalton lives next door to Tate, where she and four other people were murdered by followers of Charles Manson.

There’s not a whole lot we know about how Tarantino is dealing with the Manson murders (of if we’ll even see them), but Robbie’s involvement would lead us to believe Tate plays a fairly big role in the film. Word from Los Angeles is that Tarantino and his team have been transforming swaths of the city into its 1969 iteration, with period cars lining the streets. The costumes we’ve seen thus far, from costume designer Arianne Phillips, are perfect. Tarantino is also re-teaming with cinematographer Robert Richardson, who did such stellar work on Tarantino’s 2009 World War II flick Inglourious Basterds.

Featured image: Margot Robbie as Sharon Tate in ‘Once Upon a Time in Hollywood.’ Courtesy Margot Robbie/Sony Pictures.