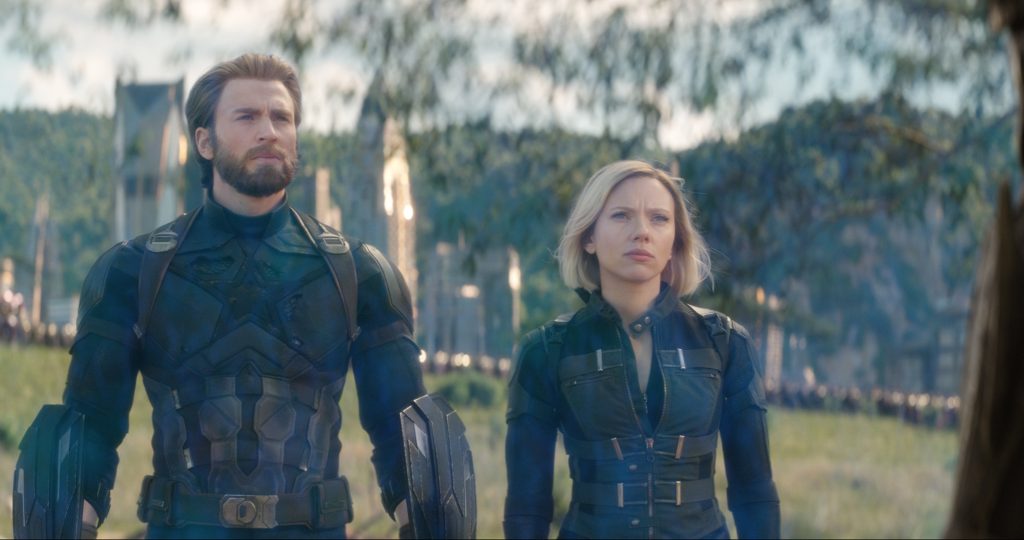 You had to figure that anyone who made it out of Avengers: Infinity War alive would be scarred. (This should go without saying, but, spoiler alert.) Now that the Russo Brothers MCU-shattering epic is out on Blu-ray and digital download, we’ve had a chance to re-watch the film and get reacquainted with just how brutal the Thanos snap really was. The experience of watching so many characters turn to dust in the theater was shocking and overwhelming. Watching it a second time, you’re able to pick up on the specific circumstances of each victim in the seconds before they dissolve. Black Panther (Chadwick Boseman) is trying to help his fiercest warrior, Okoye (Danai Gurira), to her feet when he dematerializes right before her eyes. Rhodey (Don Cheadle) is looking for his pal Falcon (Anthony Mackie), unaware that Falcon has just been wiped away by Thanos mere feet away. After her heroic effort trying to save Vision (Paul Bettany), then her even more heroic decision to kill him for the sake of humanity, Scarlet Witch (Elizabeth Olsen) is forced to watch Thanos bring him back from the dead, only to kill him once again after he removes the mind stone from his head. After all that, Scarlet Witch also turns to dust. And then there’s Spider-Man (Tom Holland). As if Tony Stark (Robert Downey Jr.) didn’t have enough guilt, the kid from Queens who he tapped to be a part of the Avengers dies in his arms. Tony knows he’s wholly responsible. This is to say nothing of Rocket (Bradley Cooper) watching his best friend Groot (Vin Diesel) die before his eyes. Oh, all the rest of the Guardians died up on Titan. Rewatching Infinity War gives you the chance to take in these moments afresh and see just how calibrated they were to take the largest possible emotional toll on the survivors.

In an interview with Wired, which we came to by way of CBR.com, Joe and Anthony Russo talked about the toll Thanos’s universe-halving snap had on the surviving characters. First, here’s the full video if you want to hear the Russo Brothers expound on every character in the film:

While everyone lost somebody in Infinity War, the Russo Brothers say that Captain America (Chris Evans) and Black Widow (Scarlett Johansson) will have a “much harder edge” in Avengers 4. In the years between Captain America: Civil War and Infinity War, Cap, Black Widow, and Falcon had created the Secret Avengers, fighting evil across the globe clandestinely. “You can’t go on the run without it affecting you,” Joe Russo says about Black Widow and her comrades. Coming back into the light (and facing a court-martial for doing so) to fight Thanos in Infinity War was a personal risk that had to be taken. After years working in the shadows, Cap and Black Widow reemerge only to watch their friends die all around them. We know that Avengers 4 is the end of the road for Chris Evans as Captain America, and while we’re excited about the Black Widow film in the works, we get the feeling that our bruised and battered Secret Avengers are going to have to give everything they’ve got in Avengers 4—which possibly means Cap’s life—before Thanos can be killed. We assume this will also include some kind of time-travel or time-reversal scenario that will bring back Spider-Man, Black Panther, the Guardians, and Doctor Strange, but we won’t know for sure until Avengers 4 hits theaters on May 3, 2019.