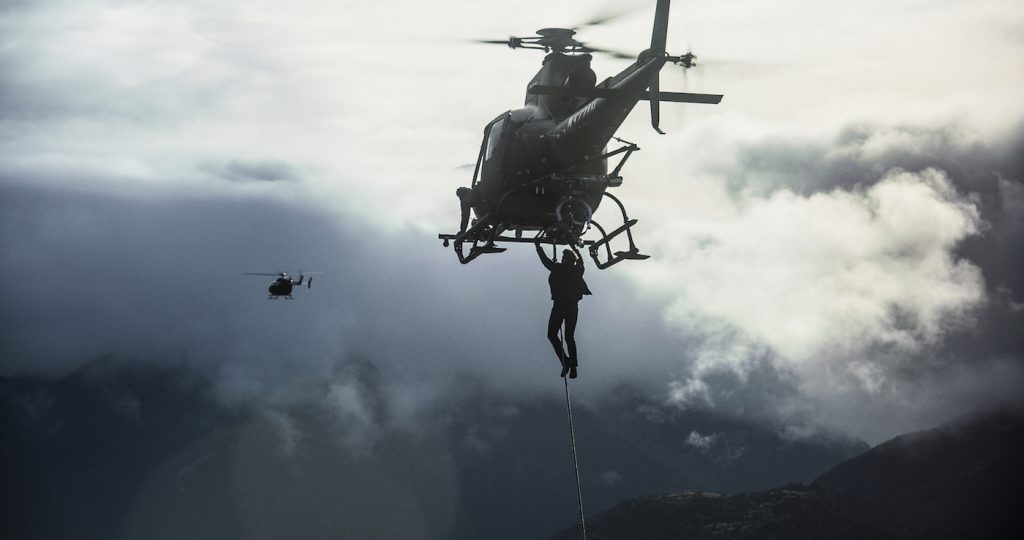 By now it is well known that Tom Cruise, age 56, performs his own stunts. What is not as obvious, unless you are familiar with his whole body of work, is that he is always training, that he learns fresh stunts for new films, and that, according to those who work with him, he shows absolutely no sign of slowing down. Of course, if you caught the commercial and critical hit sixth installment of the Mission: Impossible franchise over the weekend, you might have gleaned some of this. Fallout sees IMF agent Ethan Hunt back in force with his team, composed Luther (Ving Rhames) and jittery Benji (Simon Pegg) to deal with some missing plutonium, a returned foe, anarchist Solomon Lane (Sean Harris), a new, unseen foe, an arms dealer named John Lark, and a purring but foreboding broker tying the fates of the last two together, the White Widow (Vanessa Kirby). Then there’s Rebecca Ferguson’s equal-in-all-ways Ilsa Faust, who can do everything Hunt can do.

In getting the better of these various hostile parties, we see Hunt chased through the streets of Paris, helmet-less on a motorcycle, running after a newly minted adversary across London rooftops to end up on the top of the Tate Modern, and guiding a flaming helicopter in a realistically menacing mountainside chase. The helicopter sequence, in particular, was new territory, even for an actor like Cruise. To get some insight, we spoke with Wade Eastwood, the film’s stunt coordinator and a longtime Cruise collaborator. Eastwood, a former professional athlete, a pilot, and a stunt actor, has worked on action films from Inception (for which his stunt ensemble won the SAG award) to Terminator 3 to Tomb Raider, and he has worked with Cruise on the actor’s own stunts both within and without the world of Mission:Impossible for years. Here, Eastwood explains the stunt design process, the new tricks Cruise took it upon himself to pick up for MI6, and what it was like shooting in the film’s most remote locations.

Can you explain how the stunt design process began on the film, and who works together to create them?

I was the second unit director and stunt coordinator, so I direct the action unit and am the stunt coordinator. So I designed the stunts, choreographed them, and executed them with my team. I had an incredible team who’ve been with me for a number of years, they’re like family. It’s a very organic process with the Mission movies, because we don’t have a solid script and a solid idea, we have a bunch of crazy ideas that we then have to somehow make sense of, and make the storytelling element of it. It’s quite a process. I can have a bunch of ideas, Tom’s got a bunch of ideas, and McQ’s [director Christopher McQuarrie] got a bunch of ideas, and that’s sort of the creative triangle that we had. We spent a lot of time sitting down at all times of day or night and coming up with, ‘okay, we do a car chase. Does this prove the character? Does this enhance the story? Does this make sense to the story? What’s the major story point? Are we going after a bomb? Does all this keep us in the story, or is it action for the sake of action?’ — which I hate doing, as much as I’m an action guy, I don’t ever want to do action for the sake of action, visual spectacle for the sake of visual spectacle, or say, well, we’re thirty minutes into the movie, let’s do an action sequence.’ It’s got to be character- and story-driven, and that’s where the collaboration between me, McQ, and Tom [comes in].

Tom makes sure he really stays in character. [Ethan’s] not a planned operative, he’s an impulsive, drive-by-the-seat-of-his-pants [guy], doesn’t really want to be doing the things that he’s doing and if someone would just say, ‘all right we’ll defuse the bomb and you don’t have to do anything,’ he’d stay at home. It’s that character — he’s not going out there to do crazy things just for the sake of it, so I want to make sure I don’t create action for the sake of it. It’s got to be very strongly character-driven. And I love the creative process. We sit at Tom’s or McQ’s house or my house, a studio, a restaurant, coffee shop, and hash out these ideas and connect them with storytelling. Sometimes the story drives the action, and sometimes the action drives the story, throughout the whole movie.

What’s an example of an action element driving the story?

We love doing car chases and Tom’s such a good driver. That’s him 100%. I raced cars in Europe, so I’m a car nut, and Tom used to race cars, too, so we’ve got a lot in common with that. Racing and drifting are two different things. On Rogue Nation, I wanted him to be drifting the M3s, and really in control, more rally-style. I’m a drifter so I taught him how to drift. His consistency was incredible; Tom got to a professional level. On Mission 6, we picked up where we left off. The thing that makes a difference is the car. We had a 1980s BMW M5 in this beautiful green shade that completely blended with the cobbled streets of Paris, and it was like a romantic, aggressive car. It was what the character in the story was all about. That’s what made the car chase special, not necessarily what we did in it, aside from the fact that it was Tom driving. The car told a story in itself. Not the action sequence, but the action itself was telling a story, taking us on a journey.

So Cruise jumping out of that stealth airplane was real?

Oh god yes. Tom jumped over 100 times, from 25,000 feet, 27,000 feet. He trained throughout the film. I’ve got a great skydiving team I’ve used for years and years. Ex-British military, they trained Tom up, and he loved every second of it. He was physically and mentally exhausted, to do that many jumps, and to get to that level so quickly, while acting and producing, doing fight training, driving, and fight rehearsal. I’ve worked with him a long time, he’s a solid guy. He put so much into this movie. We have to top if all, and it really shows.

The helicopter sequence was another thing. Tom and our flyrunner had to run all over the place in order to get to [different sets] quickly. We had to be drifting on a racetrack, then get back to a studio, then fight rehearsal, then shooting. I’m a helicopter pilot, and my life was in New Zealand many years ago. [Tom and I] were catching up one day about how great flying in New Zealand would be, so we said one day, we’ll do something. This was years ago. We were chatting about how we could do it, and he said, let’s do it on this. Let’s do the coolest helicopter sequence ever done in a movie. And that was an example where the action drove the story.

Do you have to take more safety precautions than you used to?

There’s not really any more safety precautions. I have to make the stunts possible, regardless of who’s doing them. What it is is preventive measures — I have to make sure that actors are correctly trained. Tom doesn’t have an entourage like a lot of Hollywood actors who are way smaller than he is. Tom has a team. He has a security guy and someone to take care of the little things. But the rest of his team are a physiotherapist, physical trainers, a nutritionist. He keeps himself in a very peak physical condition, like any top athlete, and that enables him to carry on. Everyone thinks, oh, Tom with his entourage, and it’s not like that at all. He just has a team. He’s always in the stunt area with us, or coming in and training with us even when he doesn’t have to be. You’ve got to know the man to be able to understand him. There’s nothing ego-driven about him at all. He just loves his job and wants to be good at it, so the audience is engaged and stays with the character. He’d never do it stupidly, and I’d never let him, because it would be unsafe. There’s always a correct training routine we go through. He does all his own helicopter flying. I’d never let him go near the mountain until he’s done proper mountain racing, in New Zealand, with a proper New Zealand racing pilot, who makes sure, when he signs your piece of paper, you’re at that level. Those are the people Tom circulates with. We make sure that he’s safe, and he makes sure that he’s safe. He makes sure he’s able to do it, and he’s running around like a 20-year-old.

How did you prepare for that helicopter chase?

The training was a year. We shot for six weeks in New Zealand. So Tom flew every day. He flew himself to work, home, he loves flying. It’s not like the pilot sets up and Tom gets into a pre-warmed seat. He does the pre-flight check, he’s his own engineer, and gets in there and flies it.

What was the experience like in shooting that final action scene, on that remote piece of rock face in Norway?

It was an incredible location. It was so remote. We had to walk halfway up one day because the weather was so bad. At times I had Tom and Henry down on the rock face, and I was leaning over the edge, talking to them, and they would disappear into the clouds completely. We’d have freezing rain. It was so bitterly cold. We were up against every element you can imagine on that movie, as well as time, and schedule, as well as all the other things that go into making a big movie. The day we wrapped that unit, I took off with my crew and the whole helicopter shook sideways, plummeted, and when we landed, a massive storm came in. The place was just whited out, the day after we took off. Everything was intense about that movie, behind the scenes as well in front of the camera.