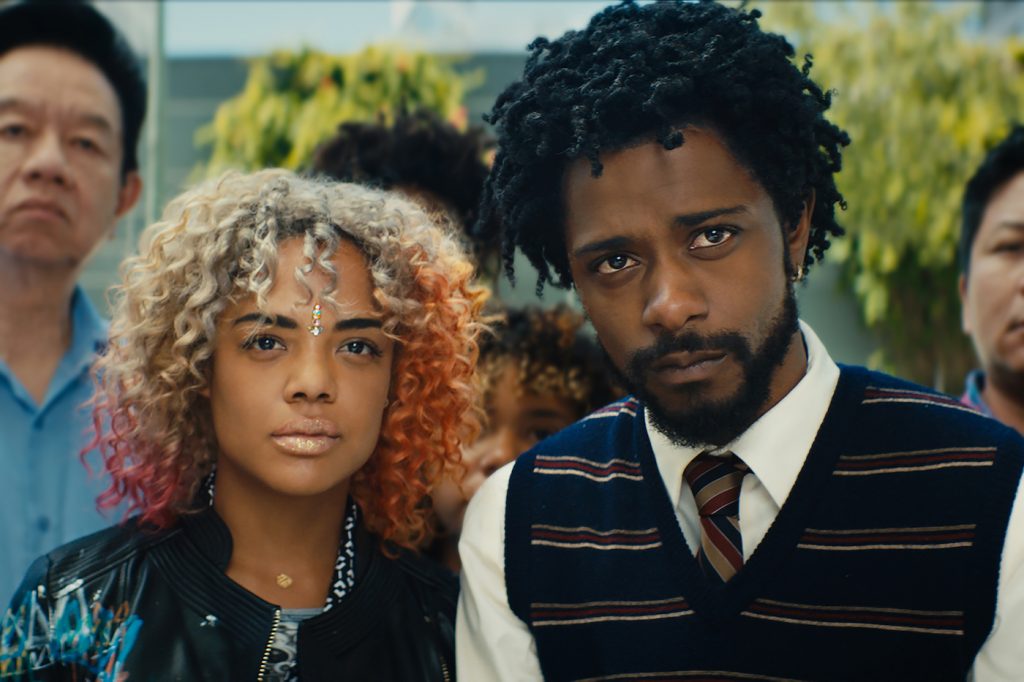 Sorry To Bother You is coming to a theater near you, courtesy of Annapurna Pictures, after being one of the most buzzed about films shown at this year’s Sundance Film Festival.

The directorial debut from Boots Riley, articulate troublemaker and frontman for the band The Coup, has had a bumpy but fascinating road making it to the screen. This satiric, decidedly trippy film is about a young, seemingly malleable telemarketer named Cassius Green (Lakeith Stanfield) and his girlfriend, a politically engaged artist named Detroit (Tessa Thompson) who navigate the world of sales in a dystopian future America, and discover a magical secret to success for a man of color in big business. Co-stars like David Cross, Armie Hammer, and Terry Crews play characters that build a story so strange it has to be seen to be believed.

The film is getting a spectrum of reactions, from walk-outs by the confused and offended, to standing ovations by viewers who place it near the top of their cult favorites. We talked to Boots Riley about the long, strange trip it has been getting Sorry To Bother You to the screen.

As brilliant and nuts as this film is, I have to wonder what your elevator pitch was for the story, and how you found a way to sell the idea.

The thing that I would get to hook people in is, “It’s an absurdist dark comedy, with magical realism and science fiction, inspired by the world of telemarketing, and it’s called Sorry to Bother You.”  That would make people ask more. I had a very succinct three short paragraphs, which I can’t share now because of spoilers, but every sentence was something that would hook you in to the next one. This didn’t turn into anything, but I remember we had a meeting at A24 with this dude named Noah. This was a couple of years ago, and when we got there, and sat down with him and his assistant, he said, “Hey, guys, I’m really sorry, but I only have two minutes, and then I have to get on this call. I’ll listen to the first two minutes and then I’m going to leave, but my assistant is going to stay and take notes.” I started with the pitch I just mentioned, and the meeting went on for two hours, and he stayed.

Ultimately Significant Pictures wound up working with you. Can you talk about the journey to getting this film made?

The chronology is, I had done a show with David Cross in 2002, and I had his email. When I wrote the script, I emailed him, asking him to read the script. He said for me to send it to his house. What he told me later is, he had no intention of ever reading the script! It turns out he was gone when the script got there. His assistant was housesitting, and she read it because she was bored, and told him he had to read it. He did, and said it was hilarious. He said I could use his name to shop it around. I got in touch with Patton Oswald, and told him he should read it because David Cross said it was hilarious. He loved it, and said I could use his name, too.

Jump to a couple of years later, when I ran into Dave Eggers on the street in San Francisco. By this time, I thought I was just going to put the story out online. I told him about my plans, but I wanted it to be as tight as it could be, so I once again said David and Patton thought it was great, and asked if he’d read it, and give me some notes. He read it and said publicly that it was one of the best un-produced screenplays he’d ever read. He told me he could help me by putting it out as a paperback book. He put it out on McSweeney’s and packaged it with the quarterly, so then I had those things.

I went to the San Francisco Film Society, and I didn’t even know that they had this filmmaker-in-residence program, but because that was about to happen at the same time as McSweeney’s, I went to them. I’ll tell you right now, this is the only thing that helped me about being known from music, because with everything else it was a detriment, like, “I’m a musician, but I wrote this script,” and nobody wants to read that. I was talking to them about being a filmmaker in residence and maybe getting a grant later on. I was walking down the street with the woman who decides all that stuff. Around the corner this black car comes up, and the window rolls down. I hear someone scream, “BOOTS RILEY! BOOTS RILEY!” It’s Dave Chapelle. He invited me to his show that night. The woman with me said “That’s Dave Chapelle!” and I guess that affirmed there was something I could do, or there were people who believed in my work. Everybody wants to be a part of something that’s actually going to happen.

I became a filmmaker in residence there and actually, once the books was printed, I went to the Sundance Film Festival with my books in-hand, and was giving them out to agents. That did nothing, but I did meet folks from the Sundance Feature Film Project, and they said I should apply to the writers lab. I got in. In between the writers and directors lab, they had this thing called the Catalyst. They select 12 projects every year to do a presentation in front of 60 investors. I did a presentation, and there was a lot of buzz. That’s where I met producers Nina Bongiovi from Forest Whitaker’s Significant Productions of Dope and Fruitvale Station, and Charles King from Macro of Mudbound. Nobody was totally sold, but they were interested. Then I got into the directors lab, and was working on who to cast in the film. We were going through different folks to have as our lead. We ended up meeting with Lakeith, and he was all the right kinds of crazy. He wasn’t the Lakeith that he is now, as far as being famous. Two episodes of Atlanta had come out and that’s about it. I started putting the cast together, and then the funding just started happening.

It’s hard to imagine anyone else in the role, but I understand Tessa was like an accidental co-star of the film.

Lakeith was already cast at that point. A year before, I had written a letter to Tessa that she never answered. Then, during the casting process, I had an actor that I wanted that didn’t have a big enough name.The producers were saying we had to find someone else, and Tessa’s name came up.  Now, she knows I tell this story.

I was always told that she would never do any kind of chemistry read, but I was adamant that it was the most important thing, that the chemistry between them had to be right. I thought if I didn’t know whether it would work, I wasn’t going to have her in the movie. My way of trying to get the person no one seemed to want, was to say I’d only talk to Tessa if she would do a chemistry read. I knew she was in upstate New York and Lakeith was in LA. To my surprise, she said yes, and asked if we could do it via Skype. I figured there was no way it was going to be better than the many reads I’d had with other actors and Lakeith in person. I figured I’d get my way. We did it on Skype with the three of us spread out over New York, LA, and Oakland. It was electric. It was undeniable. I knew she was the one.