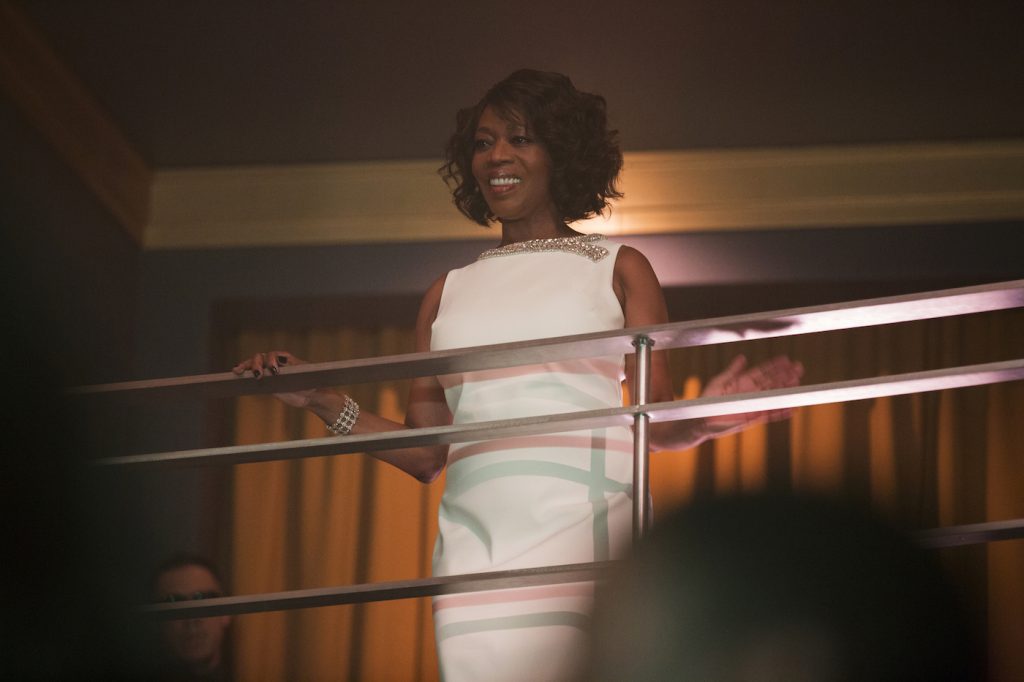 In the first season of Netflix’s adaption of the Marvel superhero comic Luke Cage, Luke, née Carl Lucas (Mike Colter) emerges from a quiet Harlem existence to fight his neighborhood’s most nefarious criminals. With inhuman strength and unbreakable skin, Luke is in a unique position to go head-to-head, or body-to-bullets, with local gangster Cornell “Cottonmouth” Stokes (Mahershala Ali) and his lackeys, and later in the season, Willis “Diamondback” Stryker (Erik LaRay Harvey).

In season two, the insidious Hernan “Shades” Alvarez (Theo Rossi) aligns himself in more ways than one with Mariah Dillard (Alfre Woodard), a corrupt councilwoman who evolves to truly embrace her dark side. The second season also sees the introduction of new friends and foes, with Mariah’s daughter, Tilda (Gabrielle Dennis) emerging as a foil to her ruthless parent, and the complicated Bushmaster (Mustafa Shakir) blowing in from Jamaica to wreak revenge on the councilwoman and tussle with Luke as he seeks vengeance for Mariah’s past misdeeds.

Critics have hailed the show’s second season, its complex new villains and deeper takes on longstanding characters. Reflecting these developments are the show’s costumes, which hew to Harlem’s street style in both season, but have taken on more verve since the understated designs of season one. We spoke with costume designer Stephanie Maslansky, a native New Yorker who is also a Marvel expert—she’s outfitted Jessica Jones, Iron Fist, and Daredevil, about the growth we see in Luke Cage and outfitting this corner of the Marvel universe

How has Harlem street style and the neighborhood influenced how you outfitted the characters?

Well, location does make a big difference, as it has for all four of the superhero shows I’ve designed.  Each one has been associated with particular colors which kind of describe the area, and the superhero himself. For example, Luke Cage is a very black and gold [scheme] but the light in Harlem is very different from the rest of the city. It’s very warm, because the streets are pretty wide and there aren’t as many tall buildings. There’s a lot of greenery in the parks around, and Harlem has an interesting, very long and storied history. The people that live in the neighborhood love to wear color, and often the colors are reflective of where their families have come from. It’s just really interesting and fun to see the vibrancy of the colors of the people, and how the light reflects off characters in the show and people who live in the neighborhood.

The show has an understated, subdued palette. It seems like only some of the female characters ever wear bright colors, like Tilda and Mariah, and even then it’s seldom. Can you tell me about that?

That’s an interesting observation. I will say that there’s been a lot of evolution in each of the characters. As a result, the style of clothing has changed quite a bit. Not only has each character evolved from season one, but throughout the next, evolves even more, to become almost an entirely different character by the end of the second season. So for example, Mariah is now involved with a younger man with whom she’s having this sensual relationship, and she’s also embraced her inner villain. In a way, she’s become more sophisticated, so her clothing has become more sophisticated, more elegant. She’s no longer trying to fit in as a politician who does the right thing, she’s not interested in that anymore. She’s embraced her past and looked at how her future could be.

I’ve always been attracted to muted, rich colors, and haven’t been a fan of big, pop-y colors unless it’s really necessary to tell a part of the story or describe a character. I usually find the use of a strong, muted, but vibrant vibe in color is what I like. One of the first outfits Mariah wears is a navy blue dress with an interesting neckline, cap sleeves, and shot through with silver threads, so there’s sparkle and elegance to it. Sometimes she wore white, and that in and of itself is a very strong color. There were a lot more muted fabrics used on her this season. There was one magenta dress we used [however] — it all depended on the mood of the character within that episode. We always try to help tell the story of the episode, and drive the story and characters forward.

Luke Cage has always been the working class hero, wearing his black, his navy blues, charcoal grays, sometimes with [a bit of] gold. But there’s a lot of evolution, you’ll find a lot more bold color. The character Bushmaster, from Jamaica, embraces color, particularly. You’ll see, in the portions shot in Jamaica, the colors are reflected back in how Bushmaster carries himself and what he wears.

How do you manage all of Luke’s sweatshirts and other clothing worn when he’s attacked?

On a technical level, you buy as many of those as you possibly can, because they’re constantly being shot up. His whole thing is that he doesn’t have a lot of clothing. If he has a black sweatshirt, he goes out and buys four of them, or just replaces them with the same one. So we have many, many of these sweatshirts. They have to be pressed, you have to put holes in them, there’s a whole process of special effects and visual effects that get involved. You have to have a lot of multiples of the same thing, especially if you shoot backward, and start off with a sweatshirt that’s been shot up already, and have to work backward with a sweatshirt, before it got shot, dirty, or burnt. You always have to anticipate the most you possibly could, and work from there.

Are the clothes worn by the characters typically off the rack, or are you designing and building most of their looks?

Well, it really depends. We wound up designing and building about 85% of Mariah’s costumes. That was really fun; I love designing and making original things, and her character really felt like she warranted it. And then for somebody like Tilda, I would have been happy to design clothes, and was prepared to, especially when I felt like there was something really specific that I couldn’t find. But there were a lot of options for her, and we always found what we needed. We make a lot of big changes, however. I love shopping at consignment stores. Sometimes we’ll find something beautiful but it’s three sizes too big, so we have to cut it down, or it’s two sizes to small and we have to figure out a way to make it larger. We’re always trying to come up with creative ideas and make something work if we really love the piece. We really love using beautiful clothing, and can’t always afford to go to Bergdorf Goodman. We’d love to go and buy fresh off the rack, high end clothing, but that’s not always possible, so we either copy things, or we build things and design them from scratch, or buy things, for example at the Real Real, and find ways to make them work.

We built some of the men’s suits. Like I said, Bushmaster has some pretty crazy outfits. There was one time we decided we wanted to build a suit for him — there’s a scene where you’ll see him visited by a familiar tailor, and then you’ll see him at Harlem’s Paradise, wearing a gorgeous, three-piece custom-made suit. We made that, and the shirt as well.

You also worked on Jessica Jones, and have a ton of prestige television experience, in general. Was Luke Cage a natural sort of Marvel-universe follow-up for you?

Each superhero has had an entirely different personality and story. The one thing they all have in common is they’re very authentically grounded in New York City, they all struggle with their abilities, and they all have very tragic backgrounds. We try to make these characters as authentic and realistic as possible, given that they’re superheroes and have abilities no human being has ever had or will ever have. We do our best to combine the comics’ characters with real live action. Obviously belief has to be suspended, somewhat, but it’s fun, and I love these characters. I’m a New Yorker, so I enjoy working in my own city and really dressing other New Yorkers.