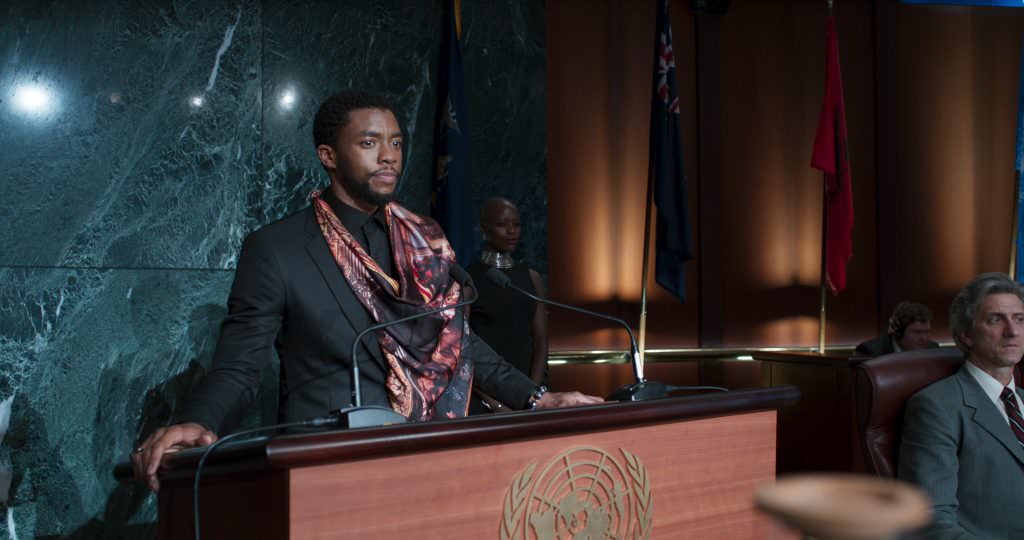 Black Panther had a really ambitious goal in creating Wakanda. It’s a fictional place born in a comic book world, but rooted in real African cultures. Production designer Hannah Beachler did extensive research to bring the technology and architecture to a place of believability. Costume designer Ruth E. Carter incorporated custom concepts into her designs for both the Black Panther and the Dora Milaje. Another really impressive piece of the puzzle was incorporating a reimagined dialect for an African nation that wasn’t ravaged by western civilization.

Chadwick Boseman, who stars as T’Challa, has spoken about his specific choice to speak in an African accent. There are actually a few different dialects that were adopted for Black Panther. Slate spoke with the film’s dialect coach, Beth McGuire, and she had some fascinating insight. For T’Challa, McGuire and Boseman settled on a Xhosa accent.

“Linguistically, what we did is we honored the genealogy of the precursor to Black Panther—Captain America: Civil War,” McGuire told Slate. “T’Challa’s father, T’Chaka, played by John Kani, is in the previous film. John Kani is from South Africa and he’s Xhosa, and he’s playing the king of Wakanda. So, Ryan and I went back-and-forth and talked about it, and I said it just makes sense. If that’s who you started with, that’s your king of Wakanda, that’s who it is, that’s the language. And so we did. We chose Xhosa, and it’s a very challenging accent, but it was kind of the kosher thing to do if we’re going to look at the genealogy of who they started with in the Marvel story.”

Unless you really know your African languages, you’ll likely be reading subtitles through part of the film. Here’s what you’ll be hearing.

“Yes, so that was a mishmash. Like for instance, a number of the actors had private Xhosa people that they knew, so we’d get in touch with them and I’d listen to the recording and make sure that [the actors] were saying it correctly. And then of course, if something was off, we had the advantage of [automated dialogue replacement], to be able to doctor it after the fact.”

Ultimately there were a lot of actors coming from all parts of the world and all ancestries. This made for a really interesting final palette. Wakanda is intended to have been formed by multiple tribes and was inspired by multiple tribes, so the differences add depth and character to the design.

“What was really interesting is, you’ll hear that they all sound like the same world and they’re all speaking with a Xhosa accent, but they’re slightly idiolectical. Daniel Kaluuya’s accent is a little different than Letitia Wright’s accent, even though they’re both Brits, because Daniel’s parents are from Uganda, whereas Letitia was born in Guyana.

“So you know, you have South America and Africa, and yet they’re both black Brits. There’s all sorts of interesting overlapping and you’d have somebody like Chadwick, who is a very trained actor but who’s from South Carolina, and Angela Bassett, who’s also a very trained actress, who is from, she’s like New York and Florida and, I think, North Carolina as well. You know, you have all of these original primary accents folding into another accent, so you get what I thought was a really great sort of natural distinction that had to do with all of the mix of tribes that are in Wakanda. Although we were really gathering and using Xhosa as our hub, this sort of just naturally happened and I thought it was kinda cool.”

The result is fascinating and worth a serious listen. It will take a few viewings to even begin to take in all of the layers of detail in this film, and we’re happy to watch it over and over again.