Part of Black Panther costume designer Ruth E. Carter‘s many responsibilities included steeping the characters of the fictional world of Wakanda in a wardrobe that spoke to the real Africa, while retaining the mythic quality that the reclusive, technologically advanced nation required. We saw this in her work on the bald, beautiful and bad ass Dora Milaje, the elite, all-female fighting force at the heart of the film. In part two of our interview, Carter takes us deeper into what we now think of as her research and development lab, to tell us how she helped come up with the most iconic single design in a film filled with them, the panther suit worn by the new king of Wakanda, T’Challa (Chadwick Boseman).

“It wasn’t like a sci-fi film where we were traveling to the moon,” Carter says. “Wakanda is rooted in Africa, and because the nation was never colonized, we imagined a world and how it would look if it remained unconquered.”

What this meant practically for Carter was steeping herself in the rich, multifaceted customs and cultures that exist on the African continent, while imagining a nation not only unconquered, but possessing the world’s most advanced, environmentally sound technology. Stepping into a movie as big as Black Panther, with Marvel Studios housing a vast catalogue of source material, as well as a decade worth of proven success in creating their Marvel Cinematic Universe, was the first of Carter’s many challenges. 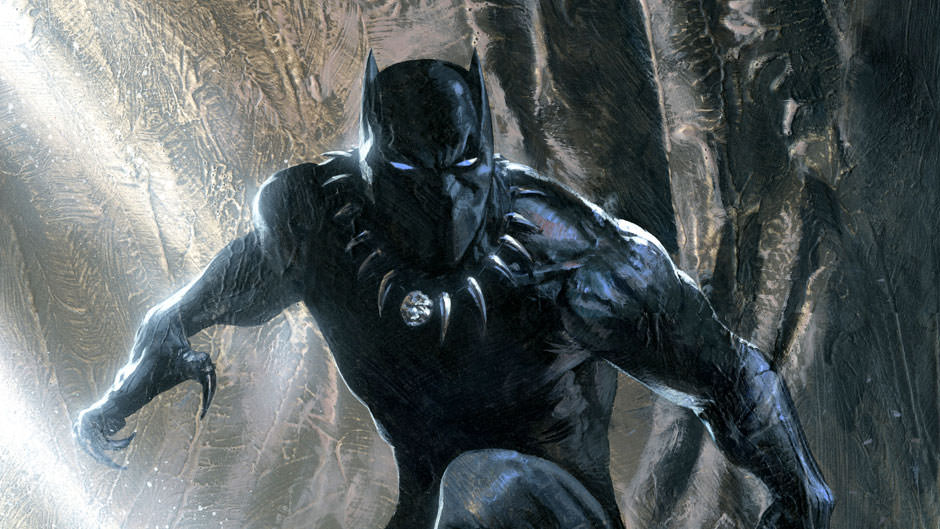 “When I went into my interview, Marvel’s walls were littered with images. There’s an in-house development team there that had been working on the panther suit and the Dora Milaje, so as I was stepping into meetings, and looking at so many images, it was daunting for me. I had to surmise in my own mind creatively what I was looking at and infuse my ideas about what Wakanda would look like.”

For Marvel fans, Wakanda is most famous for its coveted natural resource, vibranium—the super-alloy infused in both Black Panther’s suit and Captain America’s shield. Carter had to thread vibranium throughout her entire design process, a challenge considering the material doesn’t actually exist.

“We used vibranium, the strongest metal known to man, a lot,” Carter says. “I laced everything with vibranium, which looks a bit like silver or platinum. The blankets the border tribe uses as shields is completely covered by virbanium, which we silkscreened. We had to go through several versions, because any kind of cracks or breaks, Ryan [Coogler] was like, ‘That’s not vibranium.’ So that was really hard, imagining that this is that metal must stay solid.”

Vibranium is what gives the panther suit its super powers. The panther suit is, of course, much more than protective armor. In fact, it’s the most technologically advanced suit of any Marvel character, save for Iron Man. It might actually be more impressive than Tony Stark’s endlessly inventive, perpetually upgraded super suit thanks to its kinetic powers, which it derives, of course, from its source material. But how to actually make a suit that looked like it utilized this fictitious metal and was drawn from the kaleidoscopic cultures of the African continent?

“One of the first meetings regarding the panther suit was about function,” Carter says. “The Captain America: Civil War suit was successful for him, but in the context of this story, T’Challa needed a new suit, one that was thinner, lighter, and more powerful.”

Carter studied the suit that Black Panther wore in Civil War and decided that, while beautiful, it had less nuance and specificity than many of the superheroes he was fighting with—and against. What she wanted to do, what she needed to do, was give the panther suit a proper, African makeover. One that spoke to Wakanda’s unconquered history and the super powerful vibranium that was the suit’s chief source of power.

“I wondered how I was going to make the panther suit interesting. In the Civil War suit, it had this all over texture and pattern, and I knew I had to reinvent that,” Carter says. “I had to make it look less dense, and I knew from my research that the African continent has the sacred geometry, and I need the texture of the panther suit to reflect that.”

Carter found her inspiration for the new suit in Botswana.

“I decided I’d give the panther suit this pyramid shape. We called it the Okavango pattern, based on the Botswana people along the Okavango River where you see this triangle shape,” Carter says.

Once Carter hit upon using sacred geometry and the Okavango pyramid pattern in the suit (and went through several different sizes of the pattern until they found the one they liked), the next question became how glossy or dull T’Challa’s suit should be.

“We wondered if the suit should be shiny and slick, like panther’s fur,” Carter says.

While Carter was fine-tuning the panther suit, she was also looking to his fellow superheroes, not only on the Marvel side of the aisle, but also to DC’s most iconic characters.

“I went to a special place at Warner Bros. to see Superman, Wonder Woman, and Batman throughout the ages,” she says. “I looked at all of these superhero suits, and saw how through the ages the suits really did kind of root themselves in a place and time. When you looked at Batman from the 60s and 70s, he had one surface treatment, then today, you noticed there’s 3D printing and this raised treatment to the surface of his fabric. They modernized him.”

This made Carter wonder how she was going to give the panther suit an ageless quality, something that would still work in a decade.

“I thought, in ten years is this suit going to date him? I tried to take a classic approach, but everything gets dated to some degree,” she says. “But some designs you do look back and say, ‘I still love it. I can’t believe it’s been 20 years.’”

Carter happily took what she liked about some of the other superhero suits and infused it into her panther design. That included a special part of Superman’s costume that most people aren’t even aware of.

“The man of steel has a muscle suit beneath the surface of his costume, which is this steel color that bleeds through the top layer, and you could see his muscles are made of steel,” Carter says. “I thought if I could use this simple approach, and make Black Panther’s muscles look like they’re made of vibranium, it would be similar, and it would give his muscles this luminosity. I just didn’t feel that the vibranium was seen enough in his previous suit. The Panther needed to have vibranium laced into the work of his costume, so we made his muscle suit, which he wears over his own muscles, and it makes the dynamic of his superhero suit come to life. The muscle suit is a silver color, made out of very thin Euro jersey with the Okavango pattern printed on top, and once you see him in it…he became someone you’d never get tired looking at.”