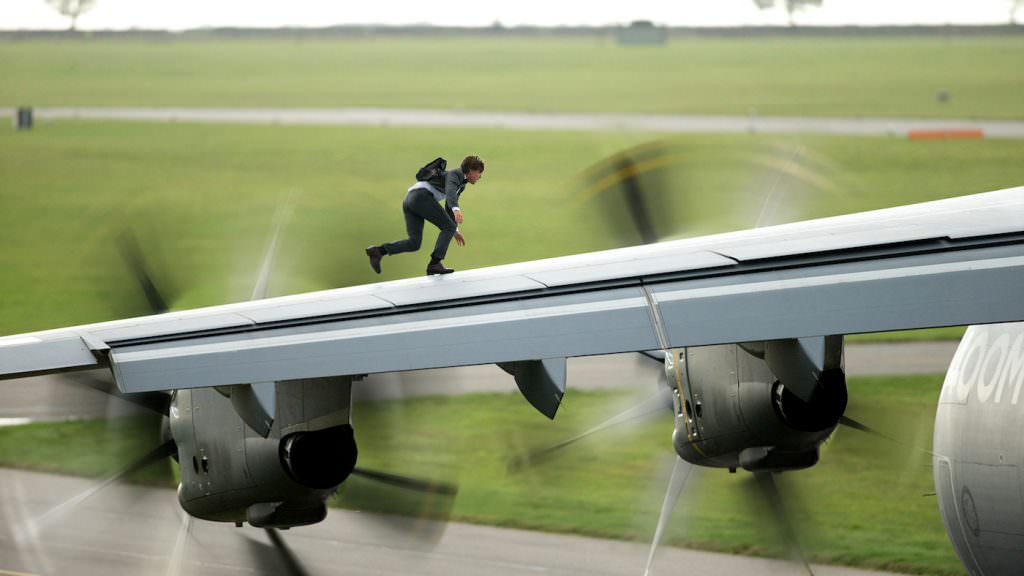 No, the featured image above is not from Mission: Impossible 6—we wanted to save that beauty for below. Also the new title, which we’ve been waiting a long time to find out, from the very first images released by writer/director Christopher McQuarrie all the way through Tom Cruise’s injury, and now, finally, we have our answer. Ethan Hunt himself hopped on Instagram and, with his very first post, revealed both the film’s title and this epic image.

We’ve upped the ante for the sixth #MissionImpossible. I can’t wait for you guys to see more.

Mission: Impossible – Fallout is a pretty fantastic title, and although we still don’t have an official synopsis, we can be reasonably sure that the titular fallout has to do with the ramifications from Mission: Impossible – Rogue Nation, in which Ethan Hunt and his team went to extreme lengths (as is their wont) to take out the Syndicate, an organization of rogue agents hellbent on destroying the Impossible Mission Force. Yet all we can do is speculate, because, in a very Mission: Impossible-like way, the current status of Fallout‘s story on IMBD.com is “plot unknown.”

Here’s what we do know—the best part of Rogue Nation will be playing a very big role here. We’re talking about Rebecca Ferguson’s MI6 agent Isla Faust (what a name), who nearly stole the show from Cruise’s Ethan Hunt, proving herself as capable, cunning and tough as his legendary super spy. Joining Cruise, Ferguson, and Impossible stalwarts Simon Pegg, Ving Rhames, Michelle Monaghan and Sean Harris are a stellar cast that includes newcomers Henry Cavill, Vanessa Kirby, and Angela Bassett. Every film is improved by Angela Bassett. Every. Film. (We can’t wait to see her as Ramonda, Queen of Wakanda, in the upcoming Black Panther).

We’ll share the trailer when it drops, which we expect fairly soon. Mission: Impossible – Fallout is due in theaters on July 27.