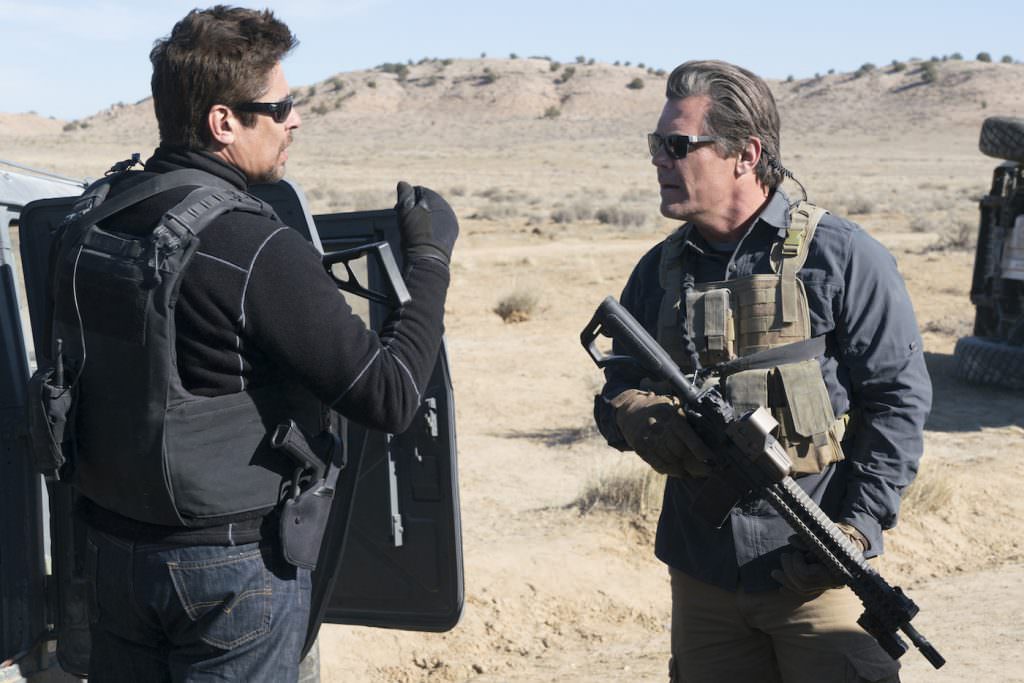 We’ve had the privilege of speaking with Sicario 2: Soldado screenwriter Tyler Sheridan three times. Most recently, it was for his directorial debut, Wind River (which he also wrote), about the murder of a young Native American woman in rural Wyoming. Wind River was the third film in Sheridan’s trilogy about the state of the American frontier, which also included Hell or High Water, a cops-and-robbers tale set in Texas, and Sicario, his thrilling, terrifying look at crime on the Mexican/American border directed by Blade Runner 2049’s Denis Villeneuve.

“I have family in law enforcement and have grown up around it,” Sheridan told us. “Sicario had international agencies, strange organizations coming together as a means combat a new enemy. Or, maybe, they are the enemy. Hell and High Water shows the autonomy that the Texas Rangers have. Wind River has the Bureau of Indian Affairs dealing with the FBI.”

Sheridan has added a fourth film to his frontier saga, Sicario 2: Soldado, which brings back two of Sicario’s main characters in what looks to be an even more brutal look at Mexican/American drug war. In the film’s first trailer, we’re reintroduced to Josh Brolin’s Matt Graver and Benicio del Toro’s Alejandro, two men who played very fast and loose with the law (if they adhered to it all) in the first film, and who are now asked to intervene in a drug war that’s escalated to the point where they no longer have to play by any rules at all.

Missing, of course, is Emily Blunt, who was so affecting as Sicario’s moral center, and who Sheridan didn’t bring back because after the events in the first film, he couldn’t find an unforced way to include her character (Sicario ends with del Toro’s Alejandro threatening her life). Also gone is director Denis Villeneuve and cinematographer Roger Deakins, replaced by  Stefano Sollima and Dariusz Wolski, respectively. Yet Sheridan penned the sequel, and with Brolin and del Toro back, joined by Matthew Modine, Catherine Keener and more, the film has a very good chance of being one of 2018’s most impressive thrillers.

The trailer is captivating, and captures the sense of seriousness and moral ambiguity that made Sicario such a bracing film. As Sheridan told us, what motivates him is not the action or the violence, but the drama inherent in films that deal with crime, hard scrabble lives and life and death. A Sheridan-penned script may have a few clearly good and bad characters, but most exist in that grey area, operating in a world that’s thrilling to watch, but that none of us want to experience first hand.

“I try to play with structure,” Sheridan told us. “I don’t think of what I do as action films. I think of them as drama with a whole lot of action. A perfect film for me would be Michael Mann’s The Insider with a gun fight. Love the action but with emotional reflection.”