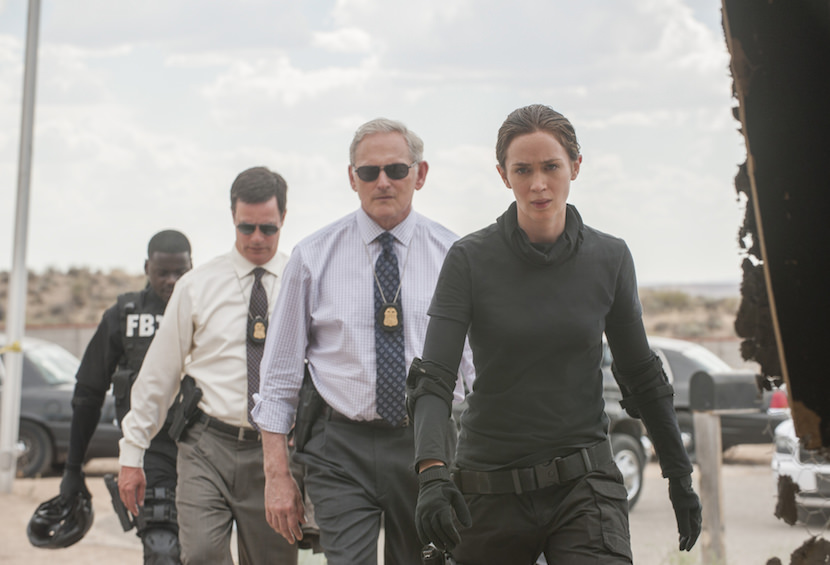 In Sicario Emily Blunt stars alongside Josh Brolin and Benicio Del Toro as an FBI agent who is struggling to maintain her principles when she is recruited into the war on drugs at the border between Mexico and the US. The Credits talks to screenwriter Taylor Sheridan about what attracted him to this world and how being a “not terribly good actor” helped inform his scriptwriting.

What attracted you to this topic? It seems like the drug trade is so messy that you’re dealing with a lot of gray areas.

The only gray area exists in combating it, because the world itself is just pitch black. So it was really exploring the logical evolution of confronting it as it grows, as it gets more sophisticated, as it gets stronger: which it has. How does one combat it, you know? It’s something that the War on Drugs was declared in the ‘80s and it was lost almost the next day and we just continue to lose it. This is the consequence of a lot of things and let’s examine it, you know? That’s what I do.

You’re a native Texan and are familiar, to a certain extent, with the world that the film is set. Can you tell me a little bit about how you went about researching the film?

There are countless outlets where you can educate yourself very quickly if you wish to learn about it and the more challenging aspect of the research was constructing a plausible means of utilizing military intervention within the borders of the US and really understanding the layers. At what point have we bled from federal employee to contractor to independent operator? All these things, you know these missions that we watch unfold, they are rather routine throughout the globe. It was just imagining what are the consequences and methodology of utilizing military as a police force? Something that they have been forced to do in Iraq and Afghanistan and any number of different places. What does it look like if you do it at home?

Why did you choose Kate (Emily Blunt) as the person we’re seeing the story’s perspective from?

Well, it was very important that the character be someone that doesn’t physically appear naturally suited for the job. You get a sense that she overcame a tremendous amount to be as respected and as effective at what she does. When I wrote the character, I wrote that she is little thin. She’s the kind of person that achieved her position you know, through grit and persistence and tenacity, rather than raw, natural ability. The reason is that I wanted you to see as an audience the toll that it would on her life. You know, divorced and moved into this apartment where she hasn’t unpacked a single box, place is a frickin’ mess. I mean her life is consumed by her job, which is an all-consuming job anyway, if you look at what she does for a living.

It was important that you really see how committed she was and you see how much it cost her to get to that position so that you would believe how much she would fight for them to do it the right way on this journey. Otherwise there could be an ambivalence. Why is she so rigid? Well, she is so rigid because she has dedicated and sacrificed her entire personal life and everything she has to do things this way, the right way.

Then she sees other people being effective in the complete opposite way and questions her whole life.

Yeah, well what you learn about her by the end is she refuses to be coerced, which makes her an extreme liability. That was one of the things I was exploring: if you have a place where the rule of law doesn’t exist and you drop someone who is committed to the rule of law into that world, what happens?

There is a moment at the end where she has every opportunity to do what she thinks is the right thing from the standpoint of lesser evil or greater good, that would technically be against the law, and she is incapable of doing it.

I dragged that character through absolute hell because I wanted to drag the audience through hell and I needed a conduit. I needed a surrogate. I was like, who is going to take us through this hell and how can we do it in a way that you never question that individual’s morality?

It’s interesting dealing with those sorts of themes of good and evil in such an environment because at each point you sort of want her to side with someone and in the end she is still completely alone.

Yeah, I mean it’s a wretched journey for Kate and in lesser hands, it took an actor of an impeccable skill, talent and commitment to find all that nuance with very little to do by design. Intentionally, very little to do. There were things that [director] Denis [Villeneuve] and [director of photography] Roger [Deakins] did that were so brilliant in the manner which they exacerbated that situation for her with the camera angles. Keeping us and her in the dark with the perspectives of the way that they shot things, that enhanced that tension even more. I was in awe of what they did.

You are an actor yourself [Sheridan had roles on Sons of Anarchy and Veronica Mars]. Do you feel like that brings a different perspective to writing a script?

Absolutely, I think that it’s tremendously helpful with dialogue because I understand, not that I was a terribly good actor, but because I wasn’t a very good actor, the kind of roles that I played were roles on largely not very good things, spewing exposition. Not only was I not terribly gifted at it, I was also compelled to say some of the more difficult things to say and so I try like hell to avoid that.

I try to go through a script and anywhere that I see like, hello, yes or no, there must be a more interesting way to say those things that tell us something about somebody. I think it has been very helpful in that I do understand the consequences of forcing an actor to help the story move itself. Then they are not reacting. I think it was vital for me, the way that I tell stories. It was a great proving ground.

What are you working on next? Have you got some more screenplays in the bag?

I do. I have a film coming out next year called Comancheria which is with Chris Pine, Jeff Bridges and Ben Foster. A really gifted director named David McKenzie directed that, and then I have a film called Wind River, again with Chris and Elizabeth Olsen, that I am directing. We will start that up here in a couple months.

So you’ll get to see it right through to the end. That’s exciting!

And scary I guess?

I have to admit I have been very fortunate in that I had a director of Denis’s immense talent to direct my film and so there is nothing to blame but this time whatever the movie does, it does it because of me in entirety, so I guess there’s a certain nakedness to that.