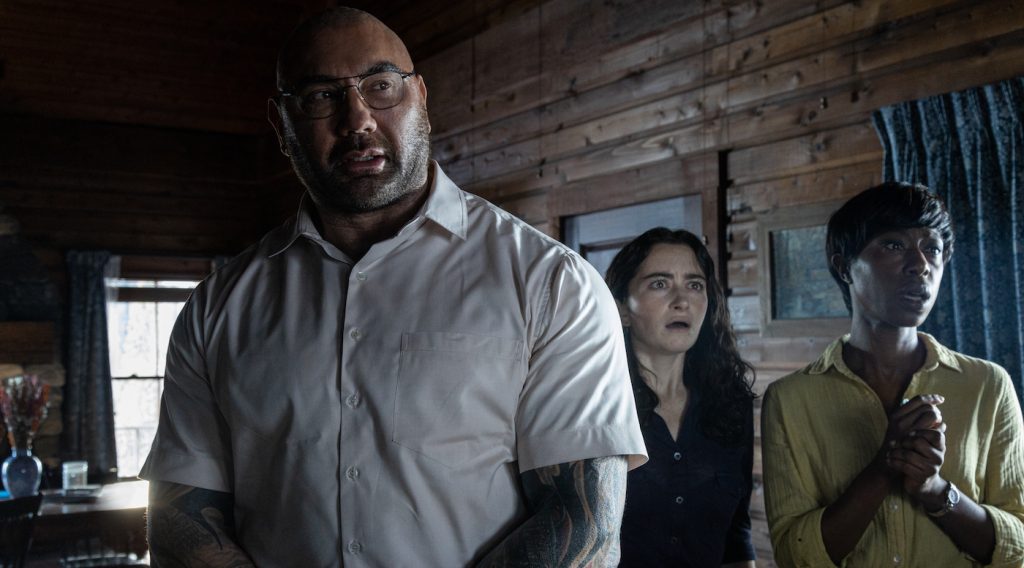 When you’re watching an M. Night Shyamalan movie, even the most common sounds are terrifying. And nothing, it turns out, is scarier than the sound of a knock at the door, especially when you’re renting a cabin in the woods for a weekend and not expecting any company. What’s even worse is when the person doing the knocking is Dave Bautista’s Leonard.

In a new behind-the-scenes look at Shyamalan’s latest released by Universal Pictures, Bautista sets up the film’s conceit; we have a family of three made up of Wen (Kristen Cui) and her dads Andrew (Jonathan Groff) and Eric (Ben Aldridge) whose weekend idyll is obliterated by the arrival of Leonard and his accomplices (played by Nikki Amuka-Bird, Abby Quinn, and Rupert Grint). The reason for Leonard’s arrival is dire; here’s there with news of the end of the world, and the only way to keep the apocalypse from coming is for one of the three members of the family to sacrifice themselves. Talk about a buzzkill.

“I believe in this type of storytelling that when you come to the movie theater, you want to see something incredibly powerful,” says Shyamalan, “incredibly emotional, experiential, but you want it to be bigger than life.”

“There is no place to run, no place to hide,” says Bautista, “so I think it’s like layers of nightmares in this film.”

Shyamalan explains that, as he’s done so evocatively in his past work in contained thrillers like The Sixth Sense and Signs, Knock at the Cabin tells a larger-than-life story through a very suffocating, confined space.

“I’m very drawn to stories of confinement and telling very large stories through a small window,” he says. “That constriction, that balance, the juxtaposition of the size of the story and the way we’re telling is very exciting to me.”

Leonard and his accomplice’s mission seems nearly as hard on them as it is on the family. With brief sequences showcasing visions of the apocalypse that Leonard promises is nigh if they don’t choose—planes falling out of the sky, a terrifying tidal wave—Shyamalan seems to have built his very favorite kind of film, a puzzle box that opens out into a vast nightmare.

Check out the behind-the-scenes look below. Knock at the Cabin Door arrives in theaters on February 3.

Featured image: From left: Dave Bautista, Abby Quinn, and Nikki Amuka-Bird in KNOCK AT THE CABIN, directed and co-written by M. Night Shyamalan