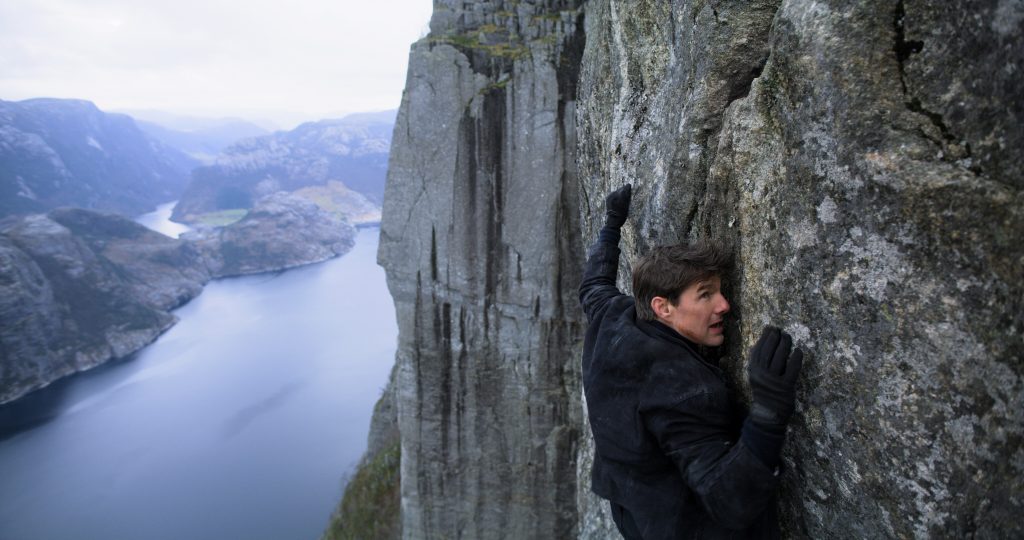 Paramount has released a look at what might be one of the most insane stunts in the history of cinema. Tom Cruise, legendary (among other reasons) for upping the ante with his stunts for each and every Mission: Impossible installment, can be seen in this new featurette pushing the envelope presumably as far as one would think it’s possible to go. The new stunt is for Mission: Impossible – Dead Reckoning – Part One. It’s been years in the making, requiring Cruise to ride a motorcycle off a cliff and launch himself into a BASE jump. But of course.

This kind of lunacy is all in a day’s work for Cruise and the Mission: Impossible creative team, especially for Cruise and stunt coordinator Wade Eastwood. Eastwood is featured in the video, explaining that a year of BASE training, advanced skydive training, canopy control, and a slew of other skills were required to pull off the feat. While Cruise is the center of attention, the video shows how it takes a team of experts to deliver a stunt like this while keeping everyone safe.

“This is far and away the most dangerous thing we’ve ever attempted,” Cruise says.

It wasn’t just the aerial work Cruise had to master, but also motocross riding. The Mission: Impossible team built a motocross track for Cruise to practice, learning how to get comfortable riding the bike and jumping far distances. Writer/director Christopher McQuarrie explains that the cameras required to capture all this in the most thrilling way possible didn’t even exist when they were filming the last installment, Mission: Impossible – Fallout.

The years-in-the-making stunt was filmed in Norway and has to be seen to be believed. Check it out here:

Separately, Cruise also jumped out of a plane to thank Top Gun: Maverick fans for coming out to the theater in such massive numbers. This type of thing for him probably doesn’t even get his heart rate up that much anymore, but it’s still worth a watch.

Cruise thanked the fans in the most Cruise-ian of ways, by very casually leaning back and out of a plane over the coast of South Africa. The beauty? He continued his tribute to the fans while in mid-air, taking his very sweet time before pulling the ripcord to release the parachute. In fact, we never see the parachute itself, but we do get to watch Cruise finish his thanks and start spinning crazily towards the beach below.

Cruise made this special announcement while filming Mission: Impossible – Dead Reckoning, which will be released in two parts, a year apart, and represents Cruise’s last mission as Ethan Hunt.