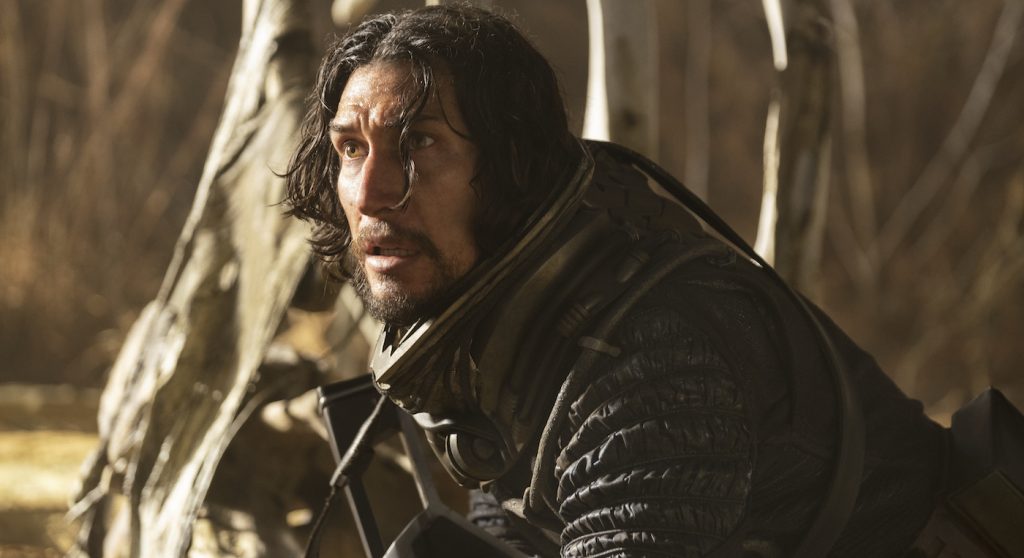 What happens when you pit Adam Driver and some high-tech weaponry against…some dinosaurs? This conceit alone is enough of a draw for us, but there’s a lot more to his upcoming thriller 65, which finds Driver playing Mills, a spaceship pilot who crash lands on a mysterious planet while ferrying thirty-five sleeping passengers. Once on the planet, and now saddled with only one survivor (a young girl named Koa, played by Arianna Greenblatt), Mills makes a shocking discovery—the mysterious planet? Yeah, it’s Earth, only it’s Earth 65 million years ago. This is why Mills and Koa end up having to face dinosaurs.

65 will now be heading to theaters on March 17, 2023 (moved back a week), and it looks like the type of early-year adventure that could draw in an audience and provide a much-needed shot of adrenaline. The film comes from directors Scott Beck and Bryan Woods, who previously co-wrote, along with John Krasinski, A Quiet Place, so these two know how to set up a tense, pared-down thriller. In this case, they trade those sound-hunting aliens for prehistoric carnivores, but there’s no doubt they’ve deployed what they learned from their critically acclaimed work in A Quiet Place into their new feature.

For a taste of what you’ll be getting with 65, check out the trailer below.

After a catastrophic crash on an unknown planet, pilot Mills (Adam Driver) quickly discovers he’s actually stranded on Earth…65 million years ago. Now, with only one chance at rescue, Mills and the only other survivor, Koa (Ariana Greenblatt), must make their way across an unknown terrain riddled with dangerous prehistoric creatures in an epic fight to survive. From the writers of A Quiet Place and producer Sam Raimi comes 65, a sci-fi thriller starring Adam Driver, Ariana Greenblatt, and Chloe Coleman. Written and directed by Scott Beck & Bryan Woods and produced by Sam Raimi, Deborah Liebling and Zainab Azizi. Also produced by Scott Beck and Bryan Woods.