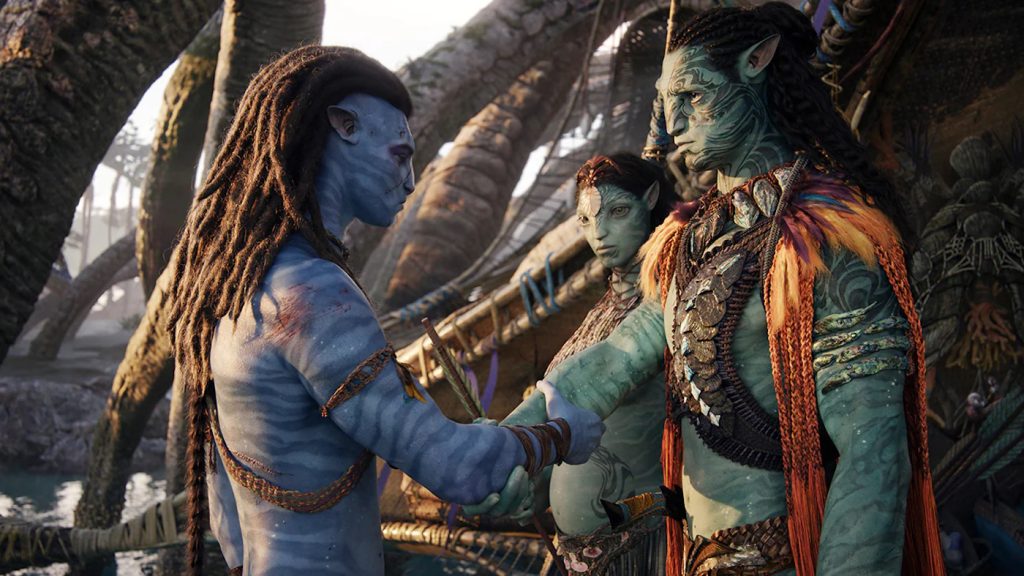 With the early reactions to James Cameron’s Avatar: The Way of Water coming in so overwhelmingly positive (the common theme was, essentially, “never bet against James Cameron“), the prospects for Cameron completing his entire Avatar saga (he has three more films planned) seems more possible than ever. Cameron already shot Avatar 3 and parts of Avatar 4 — they filmed The Way of Water and 3 concurrently — so they’ve already got that footage in the can. If all goes to plan, Avatar 3 would bow in 2024,  Avatar 4 in 2026, and Avatar 5 in 2028.

In an interview with Collider‘s Perri Nemiroff, Cameron spoke about writing his Avatar sequels (he had every script finished before they began production on The Way of Water) and why Avatar 4‘s script is possibly the wildest of the bunch. Cameron wrote The Way of Water with Rick Jaffa and Amanda Silver.

Cameron told Nemiroff that his model for his epic saga was, appropriately, what Peter Jackson pulled off his The Lord of the Rings trilogy. Cameron was impressed with how Jackson launched all three films at once. “He had the books mapped out, so he could always show the actors what they needed to know about their character arc,” Cameron told Nemiroff. “So I felt I had to do the same thing. I had to play this as if the books already existed. So the only way for us to do that was to write all the scripts and let the actors read all the scripts and see where their characters were going and what it all meant.”

Cameron pointed out that for the world to ever see what he and his team cooked up for Avatar 4 and 5, things will need to go well at the box office for The Way of Water and Avatar 3. “By the time we get down to 4 and 5, if we’re so lucky, knock wood, to get that far, which is obviously driven by market forces, we have to be successful,” he told Nemiroff. But about Avatar 4…

He also added this nugget about people who, after seeing Avatar: The Way of Water, might be able to guess how Avatar 4 could play out: “If you think you know what it’s about, and then, oh no, you don’t,” he said. “I hope I get to make that film, is what I’m saying.”

Considering Avatar: The Way of Water is being hailed as a visual masterpiece and another masterclass in creating a sequel from the man who brought you Aliens and Terminator 2: Judgement Day, the chance of us all seeing Avatar 4 seems more likely by the day.

Avatar: The Way of Water comes to theaters on December 16.