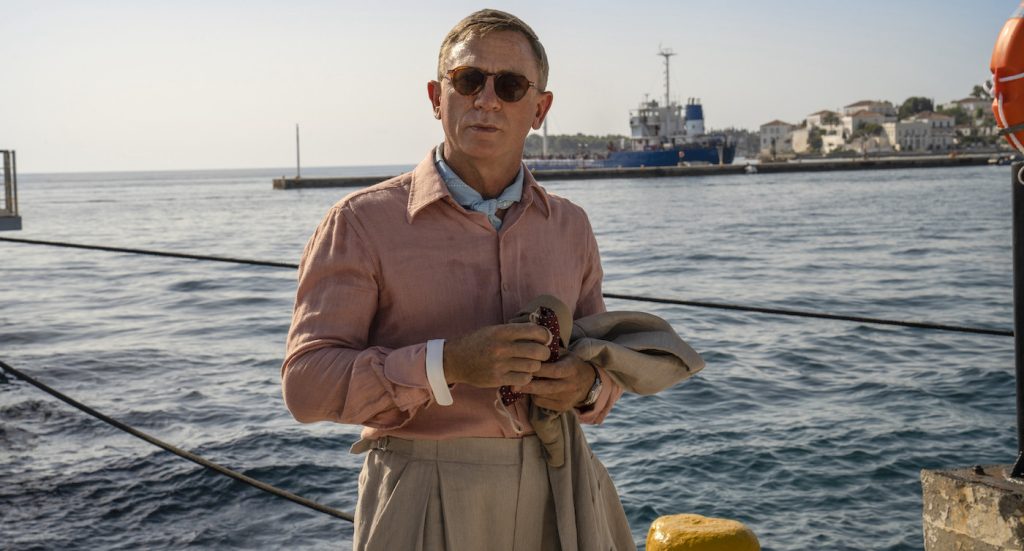 When released in 2019, Rian Johnson’s star-studded, deliciously delightful who-done-it Knives Out was met with universal acclaim and became a smash hit. In it, star Daniel Craig shed all remnants of his Bond persona to play the quirky Southern genius detective Benoit Blanc in a performance so winning and a film so enjoyable even a character’s sweater became a sensation. (Granted, that character, the spoiled viper Ranson Drysdale, was played by Chris Evans). The stage, therefore, was immediately set for Johnson’s second installment, Glass Onion: A Knives Out Mystery. The new release, another darling with critics, has the envious holiday release dates of November 23rd in theaters and December 23rd on Netflix.

Much like its predecessor, Glass Onion features a stellar ensemble cast. Craig’s Benoit Blanc is invited for a lavish weekend to a private island off the Greek coast by billionaire Miles Bron (Edward Norton).  Blanc is the odd man out in a yearly gathering of friends that includes Connecticut governor Claire Debella (Kathryn Hahn), right-wing social media star Duke (Dave Bautista), scientist and futurist Lionel Toussaint (Leslie Odom Jr), fashionista and former supermodel Birdie Jay (Kate Hudson), and Bron’s estranged former business partner And Brand (Janelle Monáe). Each character has their secrets, and when one of them is murdered, it is down to Blanc to find the killer and separate the truth from lies while keeping himself alive.

The Credits spoke to writer/director Rian Johnson about the newest film in his Benoit Blanc series, which is inspired by the best Agatha Christie mysteries and their classic 70s and 80s cinematic interpretations. He talks about his collaboration with Daniel Craig, his love of whodunits, and how he drew from his brushes with the crazy world of billionaires and celebrities to make Glass Onion equally funny and up-to-the-minute.

How has Daniel Craig acted as your muse to collaborate in creating a 21st-century detective like Agatha Christie’s Hercule Poirot?

The interesting thing is I had grown up with Poirot so much in my head that when I sat down to create this character, Benoit Blanc, I messed myself up a little bit because I started going down the wrong path. I started thinking in terms of like the great detectives like Poirot or Miss Marple or Nero Wolf; I started thinking in terms of quirks. I started thinking in terms of the superficiality of what I knew about them, so I started trying to build a version of Benoit Blanc, like, what’s his thing? Does he have two different colored eyes? It was awful. So I just had to clear the deck and say no quirks. I’m gonna give him a slight southern accent because he’s in the Northeast for the first movie, so that will make him a little fish out of the water. I decided to write him very straight, and then I’d find an actor. I didn’t know who it would be, or who I’d collaborate with.

Daniel really found, literally, Benoit Blanc’s voice, but also, one thing that I love that he has in common with Poirot is that he loves hearing himself talk in that slightly pompous, self-elevated, but endearing way. That, and the other thing that was important to me to capture was I always loved the moments where Poirot connects on an emotional level. There’s always a moment where he has an aside, like a heart-to-heart with one of the characters, or sees the good in someone, or even the good trying to get out from under the evil, and tries to have a sincere appeal. That heart at the center of it was something that I’ve tried in both of these movies to have Blanc always have. Whereas there’s so much cynicism in the motives for murder and money and everything, centering these movies around an emotional core where Blanc sees the good in somebody and is engaging with that is something that felt important.

Specifically, in the Hercule Poirot novels, there is always a political element to the way that he approaches his work, where it’s about the haves and have-nots, and his heart-to-hearts tend to be about people feeling a loss, feeling like they’re been left behind. That’s certainly present in your Benoit Blanc films.

Yeah, I mean, even down to Christie’s decision to make Poirot Belgian, to make him a foreigner, and what that meant in British society at that moment, and how that meant he was seen and regarded. That was the other big ingredient for me and the motivation for making these. For such a long time, whenever you saw a whodunit, it was a period piece set in England because it was usually a Christie adaptation, but Christie wasn’t writing period pieces; she was writing to her time and to her place. The notion of doing the genre well and doing it in America, right now, and not in a message-y type way, but not being afraid to engage with the culture right now at this moment, that, to me, was a big motivating factor for what was exciting about doing this.

You started out just a normal person going to film school but have become a noted filmmaker making some pretty huge movies. You’ve probably had some experiences in the rarified air where some of the characters in Glass Onion live. How much of what you’ve seen, with celebrities or perhaps a completely over-the-top billionaire, wound up in the movie?

That’s a phenomenally perceptive question because it’s exactly the case, and it’s something that I don’t really talk about because I’m not sure how to, but just having had exposure to this other world, and feeling the way that Blanc feels when he shows up on the island of this movie, feeling completely lost, thinking, “This is a planet that operates under rules that I just don’t understand,” it’s very strange. A lot of the details of that went, in a subliminal way, into the experience of this movie. It just also felt like there was so much comedy to be mined from that. It’s also crazy because you get exposed to some of this stuff, and you realize what’s in the movie is not really that inflated; it’s probably even tamped down a little bit compared to some of the stuff that’s out there. It was fun working with Edward Norton on it, too, because he’s in the tech investor world and has been very successful, so he also knows a lot of, like, the inside baseball of this stuff. We had a lot of fun riffing and coming up with little details we could put in there and stuff to lampoon. Also, so much that we touch upon in the movie is happening everywhere around us. The big thing that was on my mind was just big blatant lies, and big blatant lies being forwarded by complicity based on self-interest, that’s also still in the air.

It’s like nuclear war and Dr. Strangelove.  There’s no other way to come at it than to hopefully point out how horrible it is by laughing at it.

Some of the funniest moments were those clearly inspired by James Bond. From the score, cinematography, and then, in specific, Daniel Craig’s bathing costume. What kinds of discussions were there around those?

I loved the idea, and I actually I can’t take credit for this; a friend of mine, Michael Lerman, pitched me this joke even before I started writing the movie that Blanc never takes his shirt off. He’s the kid at the pool party who wears his shirts into the pool. That cracks me up, and so I went with that. Then Daniel worked with Jenny Eagan, our costume designer, and it was Daniel who went down this route of thinking, in terms of Blanc’s role in this movie, that he’s affecting a sort of Jacques Tati’s Monsieur Hulot-type vibe, so he’s got the hat, he’s even got his physical characteristics. There’s a lot of Tati that he’s bringing to it, and it’s Tati by way of Cary Grant by way of James Bond. Even with the setting, I think in the script when I was describing Miles Bron’s lair, I wrote, “It’s kind of like a Bond lair,” then I put in parentheses, “Sorry, Daniel.”

Can you talk about the production design by Rick Heinrichs? Where was the film shot? What was the inspiration for the interior, and who made the art in the art gallery?

The exteriors were all Greece. The interiors, and all the sets, including the big room with all the art, were built on a stage in Belgrade. I worked with Rick on The Last Jedi, and he’s done a bunch of work with Tim Burton. He’s incredible at communicating nuanced character through very large palettes, through big scale, and that’s what we needed for this movie. With the artwork, Rick is very knowledgeable in terms of the art world. I’m not, actually, so I was very much relying on Rick. It’s a combination of actual reproductions of classics. There’s a Rothko, and a Hockney, although the Rothko is upside down because I feel like Miles would hang it the wrong way, then also, there are some original pieces that are kind of pastiches of different styles of art by all local Belgrade artists.

Those are all very narcissistic.

Exactly. Down to the big painting of Edward that looks like it’s out of Fight Club. I just cracked up when they showed that to me.

Lots of writers forget to write strong female characters, especially those that are women of color, but they’re a main feature in this film series.

When you have actors like Janelle Monáe and Kathryn Hahn and Kate Hudson and Madelyn Cline and Jessica Henwick, when you’re writing, knowing that you’re going to have people like that coming up to bat, the amount that you can build into it knowing that they’re going to amplify it and take it up to another level, it’s pretty joyous. It’s pretty cool to see. So in that way, it’s an entirely selfish thing to work with fantastic actors like that, who I know are gonna take whatever I write and just make it better.

Glass Onion: A Knives Out Mystery releases in theaters on November 23rd and streams on Netflix on December 23rd.