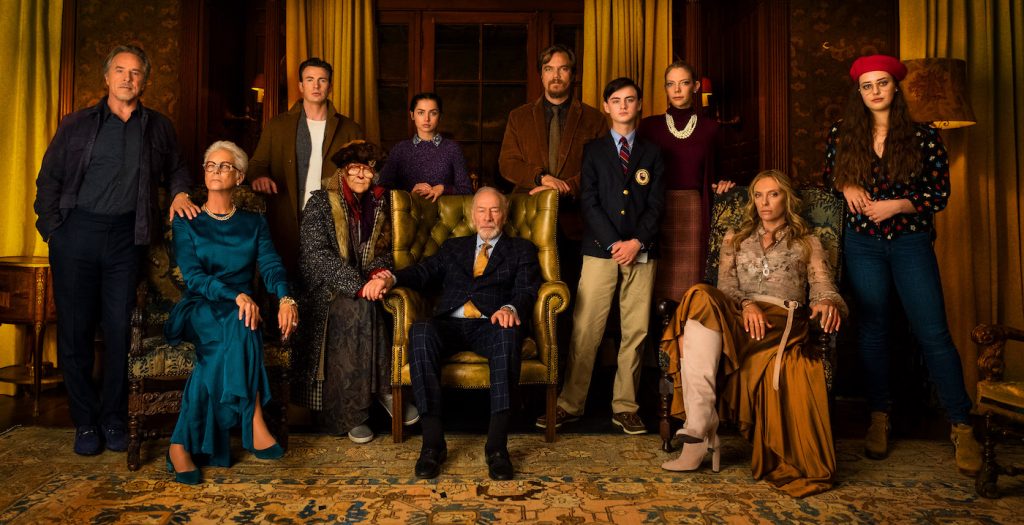 Rian Johnson‘s star-studded murder mystery was a big hit at the Toronto International Film Festival, where it had its world premiere. You’ve got your victim, the wealthy crime novelist Harlan Thrombey (Christopher Plummer). You’ve got your suspects (a who’s who of great actors, including Chris Evans, Michael Shannon, Ana de Armas, and Toni Collette), and you’ve got your peculiar detective Benoit Blanc (Daniel Craig) on the case. The reviews coming out of TIFF were very enthusiastic. The Los Angeles Times‘ Justin Chang wrote that Johnson had created “an intricate puzzle-box narrative worthy of the genre’s brainiest practitioners.” The AV Club‘s A.A. Dowd wrote: “This, in other words, is one of those mysteries so clever and fiendishly well-engineered that you eventually have no choice but to stop trying to get ahead of it, to simply enjoy the way it plants and payoffs.”

Lionsgate has released a new trailer that helps highlight some of the crackerjack performances and a bit of the mystery that has made Johnson’s whodunit such a critical hit. It lays out the broad strokes of Johnson’s story, gives a few glimpses of the incredible cast, and exposes some of the strife within Harlan Thrombey’s family, with each member seemingly suggesting that someone else may have done Harlan in.

Here is the official synopsis for Knives Out:

Acclaimed writer and director Rian Johnson (Brick, Looper, The Last Jedi) pays tribute to mystery mastermind Agatha Christie in KNIVES OUT, a fun, modern-day murder mystery where everyone is a suspect. When renowned crime novelist Harlan Thrombey (Christopher Plummer) is found dead at his estate just after his 85th birthday, the inquisitive and debonair Detective Benoit Blanc (Daniel Craig) is mysteriously enlisted to investigate. From Harlan’s dysfunctional family to his devoted staff, Blanc sifts through a web of red herrings and self-serving lies to uncover the truth behind Harlan’s untimely death. With an all-star ensemble cast including Chris Evans, Ana De Armas, Jamie Lee Curtis, Don Johnson, Michael Shannon, Toni Collette, LaKeith Stanfield, Katherine Langford and Jaeden Martell, KNIVES OUT is a witty and stylish whodunit guaranteed to keep audiences guessing until the very end.