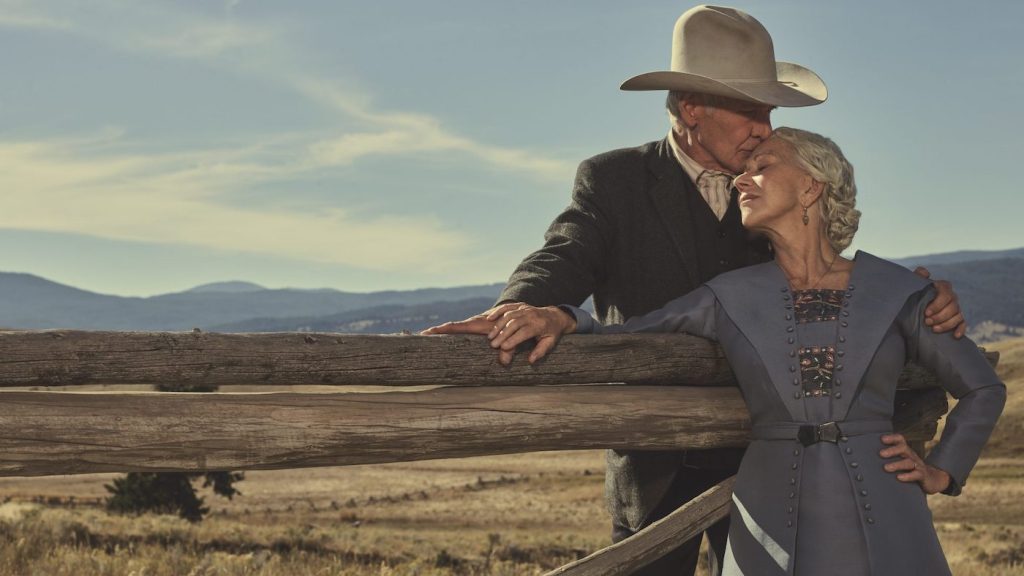 Time to saddle up. The Yellowstone prequel 1923 has unveiled its official trailer, and it finds two of cinema’s biggest stars stepping into the Dutton family drama.

Helen Mirren and Harrison Ford are front and center in the new trailer as Cara and Jacob Dutton. We open with Cara Dutton meeting newcomer Donald Whitfield (Timothy Dalton), who introduces himself and reveals that he’s her new neighbor—he’s “acquired” the ranch next door. This introduction is interwoven with shots of carnage and people lying dead in the grass. As always seems to be the case with the Duttons, trouble has followed them to Yellowstone. Yet they are not the types of people to look meekly away from a challenge.

“Well, this is the Yellowstone,” Cara says later in the trailer, “and you have no rights here.”

The cast surrounding Mirren, Ford, and Dalton are excellent, including Game of Thrones’ beloved Jerome Flynn (he played Bronn), who plays Banner Creighton, one of Whitfield’s new partners. Arguably the best moment in the trailer is between Mirren’s Cara Dutton and Flynn’s Banner Creighton, when Cara tells him, “Men kill quick, with a bullet or a noose, but your fight is with me, and I kill much slower.”

Whitfield’s aims are clear; he means to take out the Duttons, one way or another, and lay claim to the entire valley. Good luck with that. 1923 marks the first major TV role for Ford, while Mirren has previously starred in both Prime Suspect and HBO’s Catherine the Great.

1923 is set between creator Taylor Sheridan’s two other series—the Kevin Costner-led Yellowstone and the prequel series 1883. It’s situated at a tumultuous time both for the country and the mountain west where the Duttons run their ranch, at a time of pandemics, drought, the end of prohibition, and the Great Depression all roiling the country and the Dutton’s patch of land.

Check out the 1923 trailer below. The series begins streaming on December 18 on the Paramount Network and Paramount+.