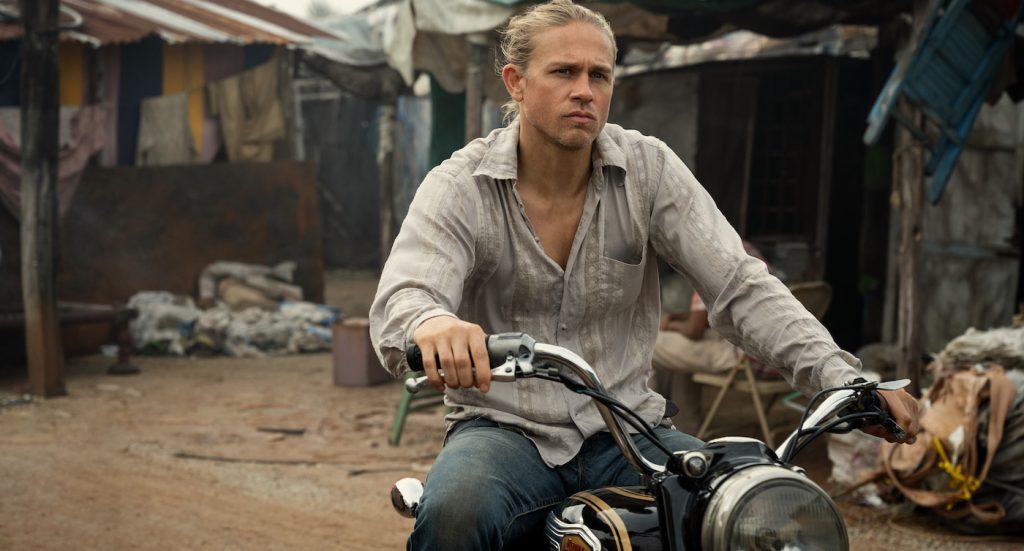 We’ve finally got a peek at Apple TV+’s new series Shantaram, based on the international bestselling novel by Gregory David Roberts. That sprawling novel, some 900+ pages of intrigue, was fertile ground for showrunner Steve Lightfoot (Hannibal) and executive producer/co-writer Eric Warren Singer (co-writer of Top Gun: Maverick). Charlie Hunnam takes on the role of Lin Ford, a fugitive who escapes to Bombay in the 1980s trying in an attempt to find a new path forward and, if possible, make amends for his past transgressions. When you’re a fugitive, agenda item number one is staying below the radar, but this proves difficult for Lin when he falls in love with a woman named Karla (Antonia Desplat), who may or may not be his undoing.

Staying hidden is difficult to do, even in a vibrant, distant city on foreign soil. The series is leaning into the novel’s thriller aspects, with Lin describing himself in the trailer “as a wanted man with a price on his head.” Lin chooses to try his luck in Bombay because he viewed it as a place where “everyone started new,” which is precisely what’s required for a man who escaped prison. A near miss with a passing bus (he’s saved by, you guessed it, Karla) sets Lin on the path of both romance and mystery, as he’s enveloped in the rich, opaque world behind the bustling city life. Eventually, trouble finds Lin as he comes into contact with a variety of characters who aren’t keen on helping a foreigner keep his secrets unless he can do something for them in return.

Shantaram looks like an ambitious, intriguing potential new hit for Apple TV, and with a 12-episode season, it has plenty of room to operate. Check out the trailer below. Shantaram debuts on Apple TV on October 14.

Here’s the official synopsis for Shantaram:

Based on the internationally bestselling novel by Gregory David Roberts, Shantaram follows a fugitive named Lin Ford (Charlie Hunnam) looking to get lost in vibrant and chaotic 1980s Bombay. Alone in an unfamiliar city, Lin struggles to avoid the trouble he’s running from in this new place. After falling for an enigmatic and intriguing woman named Karla, Lin must choose between freedom or love and the complications that come with it.