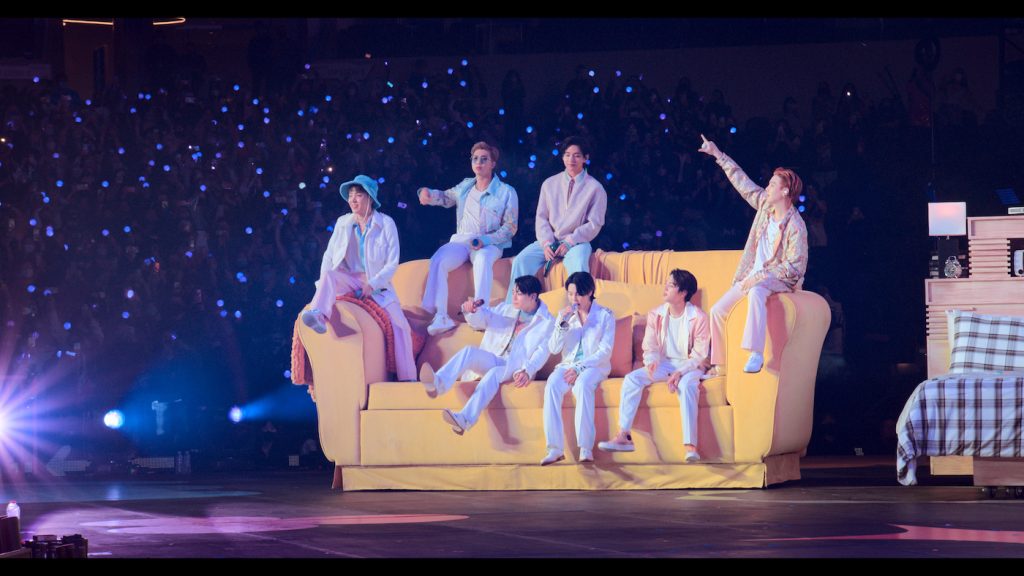 Who better to help celebrate the international scope of Disney+ Day than releasing a concert film with arguably the biggest band in the world and a sneak peek at their next live-action Star Wars series, arguably the most globally popular franchise ever?

The streamer has revealed viewers can now stream their first collaboration with the K-Pop supergroup BTS, the concert film BTS PERMISSION TO DANCE ON STAGE – LA—huge news for their legion of fans. The new video also reveals a fresh look at their upcoming series Andor, starring Diego Luna as the thief-turned-Rebel spy.

BTS: PERMISSION TO DANCE ON STAGE – LA will give viewers a front-row seat to a series of BTS concerts held at the Los Angeles SoFi Stadium in late November and early December of 2021. The concert film includes performances of some of their biggest hits, including “Dynamite,” “Butter,” and “Permission to Dance.” For those yet not initiated into the BTS superfan group, their name is an acronym of Bangtan Sonyeondan or “Beyond the Scene.” Since BTS launched in 2013, they’ve become a global phenomenon.

As for Andor, there are high hopes for the new series, which will explore the seeds of the rebellion against the Empire from the viewpoint of some of the first rebels to stand up to their galactic overlords. Andor is set before the events depicted in Rogue One (the greatest Star Wars spinoff in our opinion), when Cassian Andor (Diego Luna) was a key part of a team of rebels who successfully lifted the Death Star plans off the empire—and paid the ultimate price for their efforts.

Andor will go deeper into Cassian’s story, showing us how a one-time thief became one of the leaders of the rebellion and how he and his comrades started to piece together a way to infiltrate the Empire from the inside. The series sees the return of another Rogue One standout, Forest Whitaker’s resistance fighter Saw Gerrera.

Andor will begin with a bang—a three-part premiere on September 21—with the series totaling 12 episodes.

Check out the new video below:

In a press release from this past July, Disney+ announced the partnership with BTS and TK and the three projects they’d be revealing. They are as follows:

“BTS: PERMISSION TO DANCE ON STAGE – LA”: This exclusive cinematic 4K concert film features BTS’ live performance in Los Angeles’ Sofi Stadium in November 2021. Performing Billboard hit songs “Butter” and “Permission to Dance,” this was the first time in two years since the pandemic that the band met fans in person.

“IN THE SOOP: Friendcation”: An original travel reality show with a star-studded cast including V of BTS, Itaewon Class’ Seo-jun Park, Parasite star Woo-shik Choi, Hyung-sik Park, and Peakboy. The program features the five friends venturing on a surprise trip and enjoying a variety of leisure and fun activities.

“BTS MONUMENTS: BEYOND THE STAR”: This original docu-series follows the incredible journey of 21st-century pop icons BTS. With unprecedented access to a vast library of music and footage over the past nine years, the series will feature the daily lives, thoughts, and plans of BTS members, as they prepare for their second chapter. The docu-series will be available exclusively on Disney’s streaming services next year.